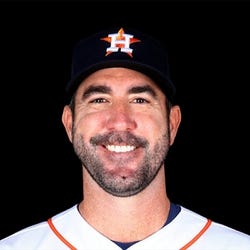 2022 Stats
W-L
18-4
ERA
1.75
WHIP
0.83
K
185
SV
0
2023 Projections
W-L
ERA
WHIP
K
SV
Unlock Our Projections
2023 Fantasy Outlook
After undergoing Tommy John surgery in October of 2020, Verlander missed all of 2021. Most tempered expectations, citing no one this late in his career has come back from the procedure to immediately regain previous form. A few suggested if anyone could do it, it was Verlander. They were right. At 39-years-old, Verlander captured his third Cy Young award, posting a 1.75 ERA over 175 frames. He benefited from a .240 BABIP and 80.5% LOB mark, but Verlander's 23.4% K-BB% ranked eighth among qualified pitchers and a 2.49 FIP, 3.23 xFIP and 3.09 SIERA are representative of an outstanding campaign. However, they also portend an ERA correction. It's hard not to give Verlander SP1 status. It's also fair to be leery of a repeat. The early market comes with an injury discount, but it still boils down to your risk aversion and willingness to invest in a 40-year-old as your staff anchor. Read Past Outlooks
read more
RANKSFrom Preseason
#