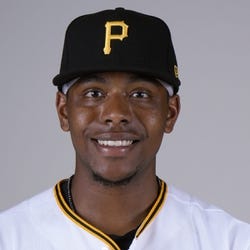 2022 Stats
AVG
.244
HR
7
RBI
41
R
55
SB
20
2023 Projections
AVG
HR
RBI
R
SB
Unlock Our Projections
2023 Fantasy Outlook
Hayes' power dropped, but his patience improved slightly, and he hit the ball with a little more authority than the previous campaign. A low 28.8% fly ball rate plus a 6.3% HR/FB mark limited Hayes to just six long balls, but if he can loft a few more batted balls while maintaining a 47% hard-hit rate, there's double-digit power in his stick. Hayes' minor league track record indicates he can shave a few points off his 21.8% strikeout rate, boosting production. The key to Hayes' fantasy potential is running as he swiped 20 bags in 25 tries last season, which is in the territory expected to benefit from the new rules. Injuries may have slowed Hayes growth as he dealt with a wrist issue most of 2021, then played through knee, back and shoulder woes last season. The latent power may manifest, but it's best to consider it a bonus and pay for steals with a batting average high enough not to hurt. Read Past Outlooks
read more
RANKS
#165
ADP
#