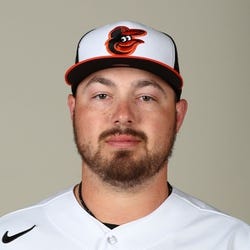 2022 Stats
W-L
3-3
ERA
3.20
WHIP
1.09
K
77
SV
2
2023 Projections
W-L
ERA
WHIP
K
SV
Unlock Our Projections
2023 Fantasy Outlook
Akin's move to the bullpen worked for both player and team in 2022. He covered 81.2 innings in 45 appearances (one start), posting a 3.20 ERA, 1.09 WHIP and 77:20 K:BB. Those numbers are very solid for a multi-inning reliever, but that role doesn't lend itself to much fantasy value, as he had just two saves, three holds and a 3-3 record. The southpaw made some strides by keeping the ball down better (average launch angle of 7.9), which trimmed his HR/9 to 1.1. He also cut down his BB/9 to 2.2 from 3.8 a year before, when he worked mainly as a starter. With big-name prospects on the horizon, Akin's unlikely to enter the rotation in 2023 barring a massive bite from the injury bug. In deeper fantasy formats, he may have some appeal as a ratio stabilizer with decent strikeout potential, but the lack of saves won't change. Read Past Outlooks
read more
RANKSFrom Preseason
#

* Exit Velocity, Barrels/BBE %, Balls Hit 95+ MPH %, and Spin Rate are benchmarked against 2019 data (min 30 IP). See here for more exit velocity/barrels stats plus an explanation of current limitations with that data set.
K/BB
3.85
K/9
8.5
BB/9
2.2
HR/9
1.1
Fastball
93.6 mph
ERA
3.20
WHIP
1.09
BABIP
.278
GB/FB
1.95
Left On Base
72.0%
Exit Velocity
81.6 mph
Barrels/BBE
4.2%
Spin Rate
2175 rpm
Balls Hit 95+ MPH
22.1%
Swinging Strike
12.6%
Prospect Rankings History
View Complete Keegan Akin Prospect Ranking History
Advanced Pitching Stats
Loading Advanced Pitching Stats...
Defensive Stats
Loading MLB Defensive Stats...
Stats Vs Today's Lineup
Want more matchup stats?
View Keegan Akin vs. Batter Stats
Loading Matchup Stats...
Orioles Depth Chart
Our full team depth charts are reserved for RotoWire subscribers.
Subscribe Now
Recent RotoWire Articles Featuring Keegan Akin
The Z Files: OK, I'm SOLD
3 days ago
3 days ago
Todd Zola reconsiders his stance against adding holds as a roto category, and takes a look at the impact it would have on relievers like Devin Williams.
Todd's Takes: So You Want to be an Official Scorer?
166 days ago
166 days ago
Todd Zola recaps the previous day's baseball action, including an argument for creating a 'team error' scoring option.
AL FAAB Factor: Waiver Pickups of the Week
190 days ago
190 days ago
Erik Siegrist checks out the talent in the American League free-agent pool as Royce Lewis pushes his way back to the majors.
The Z Files: Sometimes, Crime Does Pay
199 days ago
199 days ago
Todd Zola examines the league-wide stolen-base environment and identifies some speedy players who could be valuable as streaming options, including Andres Gimenez.
DraftKings MLB: Thursday Breakdown
207 days ago
207 days ago
Chris Morgan makes some player recommendations across an eight-game DraftKings slate Thursday.
Past Fantasy Outlooks
2021
2017
Akin has mostly flown under the radar as a prospect despite posting impressive strikeout numbers in the minors. The southpaw whiffed at least a batter per inning each minor-league season while ascending to Triple-A in four years and registered a collective 9.9 K/9 over that span. He also tallied a less-inspiring 3.78 ERA and 1.33 WHIP thanks in large part to control issues (4.1 BB/9). Akin got his first taste of the majors in 2020 and performed respectably, finishing with a 4.56 ERA and 1.44 WHIP over 25.2 innings. Those numbers aren't exactly impressive, but there's reason for excitement in his 3.27 FIP and 12.3 K/9. Akin has learned to better mix up his pitches as he has developed, which should aid in his ability to retire big-league hitters. He started six of his eight appearances last season and could be destined for a back-end rotation spot for Baltimore in 2021.
A polished 21-year-old lefty out of Western Michigan, Akin is a strike thrower whose best pitch is his fastball, though his changeup has improved dramatically, and he can even mix in a slider now and again. After being drafted in the second round of last year's draft, Akin had a successful stint for Aberdeen in the short-season New York-Penn League. Opposing batters hit a putrid .161 against him. The continued development of his changeup and slider will go a long ways towards determining Akin's future path. He could still end up in the bullpen, but for now, Akin will continue his development as a starter. Akin will likely begin the 2017 campaign at Low-A, though he could advance quickly with a fast start.
More Fantasy News