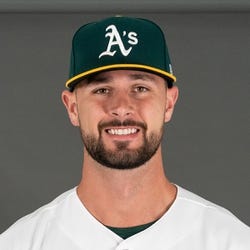 2022 Stats
W-L
1-1
ERA
8.03
WHIP
1.70
K
12
SV
0
2023 Projections
W-L
ERA
WHIP
K
SV
Unlock Our Projections
2023 Fantasy Outlook
Muller has logged three or more starts in the majors in back-to-back seasons but he still retains prospect eligibility heading into 2023. The big 6-foot-7 southpaw made notable improvements last year at Triple-A compared to 2021, upping his strikeout rate from 27.0% to 29.3% while dropping his walk rate from 12.9% to 7.4%. He scuffled down the stretch at Triple-A but showed stretches of dominance. Muller had two decent MLB starts in the second half and a terrible start where he walked six batters in 2.2 innings May 1, which dragged down his overall numbers. He threw a career-best 147 innings on the year, so he will be without restrictions in his age-25 season. The range of velocity on Muller's fastball was pretty wide (92 to 97 mph), and he will obviously be more successful if he can consistently sit in the mid-90s rather than regularly dipping into the low-90s. He throws all four of his pitches harder than the average MLB southpaw, and his upper-80s slider is arguably his best pitch. It will be tough to crack Atlanta's Opening Day rotation, but Muller could break out this year if he can recapture the peak performance he showed in the middle of 2022. Read Past Outlooks
read more
RANKSFrom Preseason
#

* Exit Velocity, Barrels/BBE %, Balls Hit 95+ MPH %, and Spin Rate are benchmarked against 2019 data (min 120 IP). See here for more exit velocity/barrels stats plus an explanation of current limitations with that data set.
K/BB
1.50
K/9
8.8
BB/9
5.8
HR/9
1.5
Fastball
94.3 mph
ERA
8.03
WHIP
1.70
BABIP
.326
GB/FB
1.45
Left On Base
54.9%
Exit Velocity
81.9 mph
Barrels/BBE
3.9%
Spin Rate
2304 rpm
Balls Hit 95+ MPH
18.4%
Swinging Strike
11.6%
Prospect Rankings History
Advanced Pitching Stats
Loading Advanced Pitching Stats...
Defensive Stats
Loading MLB Defensive Stats...
Stats Vs Today's Lineup
Want more matchup stats?
View Kyle Muller vs. Batter Stats
Loading Matchup Stats...
Braves Depth Chart
Our full team depth charts are reserved for RotoWire subscribers.
Subscribe Now
Past Fantasy Outlooks
2022
2021
2017
The last time Muller had a BB% below 12% was at Double-A in 2018, so while he has good size (6-foot-7, 250 pounds) and good stuff, it still requires a bit of a leap of faith to project him as a starter long term. His 93-mph fastball (up to 97) has above-average spin, while his upper-80s slider and low-80s curveball have strong characteristics and worked well against big-league hitters last season. As things stand, Muller will get to compete with Tucker Davidson for the fifth spot in the rotation, but it's possible Atlanta will bring in another starter after the lockout. Given his proximity and strikeout upside, the big southpaw should be a mid-round pick in draft-and-hold leagues, however, he would need a strong spring training to emerge as a solid reserve option in standard redraft leagues.
Muller got a chance to showcase his stuff in spring training following a strong 2019 minor-league campaign, but he was roughed up in two appearances, yielding six earned runs and retiring only three batters. The 6-foot-7 southpaw was nonetheless added to the Braves' 60-man player pool and ended up spending all of 2020 at the team's alternate training site. Muller has generated some buzz within the organization after posting a 3.14 ERA and 25.6 K% at Double-A between 2018 and 2019, though his 14.5 BB% and 16 wild pitches over that span are cause for concern. Part of the problem is a tendency to overthrow; while Muller features a plus mid-90s fastball, his command of the offering tends to waver as he pushes the velocity. He may be best served to better mix in his curveball, which ranks as his second-best pitch. If he can learn to harness his control, Muller could get a chance to contribute as soon as 2021.
While Muller didn't come off the board until the 44th pick in last year's draft, his $2.5 million signing bonus is more in line with the recommended value of the 17th overall pick. This draft subtlety and the fact that there are eight or nine more recognizable pitching prospects in this loaded farm system opens up an opportunity for dynasty league owners to acquire Muller at a discount, relative to his talent. Despite his 6-foot-6, 240-pound frame, Muller relies more on above-average fastball command than elite velocity at this development stage. Given his age and size, he could add a couple ticks in the coming years and move into the mid-90s on a regular basis, but for now his upside is capped at a No. 3 starter. His numbers in the Gulf Coast League were certainly eye-popping, but the southpaw won't receive a true test until the Braves take the training wheels off and allow him to log more than three innings per start while facing hitters in the Appalachian and South Atlantic leagues this season.
More Fantasy News