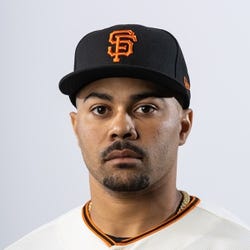 2022 Stats
AVG
.207
HR
8
RBI
26
R
29
SB
1
2023 Projections
AVG
HR
RBI
R
SB
Unlock Our Projections
2023 Fantasy Outlook
Wade Jr, as well as many of his teammates, underperformed in 2022 as much as the club overperformed in 2021. He is firmly entreched as a strong side platoon outfielder with his inability to handle lefty pitchers, and that is perfectly fine with San Francisco and their fondness for platoon situatios. What was not fine was the 93 wRC+ Wade Jr had last year and how his lack of production impacted fantasy clubs who saw 2022 as a building block rather than an outlier. The young man is still very accepting of walks but defenses position him well as he had a 74-point split between his wOBA without the shift (.347) vs when shifted (.273) There may be some relief for him with the new rules on defensive alignments, but he has a rather hard cap of 475 plate appearances with his inability to hit lefties limiting his value to NL-Only formats. Read Past Outlooks
read more
RANKS
#510
ADP
League Majors
Bats L
Throws L
40 Man Yes
Height 6'1"
Weight 205
DOB 1/1/1994
Born Baltimore, MD
College Maryland
Drafted 9th Rd 2015 MIN
$Signed a one-year, $1.375 million contract with the Giants in January of 2023.

* Exit Velocity and Barrels/PA % are benchmarked against 2019 data (min 400 PA) and Hard Hit Rate is benchmarked against last season's data (min 400 PA). See here for more exit velocity/barrels stats plus an explanation of current limitations with that data set.
BB/K
0.51
BB Rate
10.4%
K Rate
20.3%
BABIP
.233
ISO
.152
AVG
.207
OBP
.305
SLG
.359
OPS
.665
wOBA
.300
Exit Velocity
87.7 mph
Hard Hit Rate
23.7%
Barrels/PA
6.4%
Expected BA
.221
Expected SLG
.407
Sprint Speed
21.8 ft/sec
Ground Ball %
31.7%
Line Drive %
18.6%
Fly Ball %
49.7%
Prospect Rankings History
View Complete LaMonte Wade Prospect Ranking History
Advanced Batting Stats
Loading Advanced Batting Stats...
Additional Stats
Games By Position
Defensive Stats
Loading Games Played by Position...
Loading MLB Defensive Stats...
Batted Ball Stats
Loading Batted Ball Stats...
Stats Vs Upcoming Pitchers
Want more matchup stats?
View LaMonte Wade vs. Pitcher Stats
Loading Matchup Stats...
Giants Depth Chart
Our full team depth charts are reserved for RotoWire subscribers.
Subscribe Now
Recent RotoWire Articles Featuring LaMonte Wade See More
DraftKings MLB: Wednesday Breakdown
123 days ago
123 days ago
Dan Marcus likes Zac Gallen as a potential leverage option against Justin Verlander and the Astros on Wednesday.
FanDuel MLB: Wednesday Targets
123 days ago
123 days ago
Chris Morgan looks over Wednesday's slate as Mike Trout and the Angels host the Athletics.
DraftKings MLB: Wednesday Breakdown
130 days ago
130 days ago
Chris Bennett kicks off his Wednesday picks with Mariners lefty Robbie Ray down in Oakland.
DraftKings MLB: Monday Breakdown
133 days ago
133 days ago
Chris Morgan is back with his Monday DraftKings player recommendations, which include a couple Dodgers against Arizona.
DraftKings MLB: Tuesday Breakdown
159 days ago
159 days ago
Dan Marcus sets the tone for Tuesday's monster 15-game slate, recommending Mariners ace Robbie Ray against visiting Washington.
Past Fantasy Outlooks
2022
2021
2020
2018
2017
Wade is basically the personification of the surprising and amazing 2021 season for the Giants. He was flipped to San Francisco from Minnesota just before the season for Shaun Anderson as the Twins had an outfield roster crunch and were ready to move on from Wade, who had shown little in his two stints at the big-league level. The Giants moved him into a platoon situation and he rewarded them with an excellent strong-side platoon showing, particularly with a number of late-inning heroics (he hit .362/.444/.511 in late and close games). The sample size is too small to be definitive, but he is 5-for-48 in his career against lefties (.104), so we may never see Wade as an everyday player, but NL-only roto players can recognize the value in a hitter that has a 124 wRC+ for his career against righties. LaMonte may not be The Next Big Thing, but he still has some value in certain formats.
Wade's ability to draw walks and play center field have seen him called up as a reserve outfielder and spot starter at times the past two seasons, but his lack of power has kept him from winning any regular role in the offense. He has a 13.3% walk rate in the majors after strong walk rates in the minors and has made good contact despite a 20.5% strikeout rate in just 44 plate appearances. Wade can can capably play all three outfield spots (+1 to -1 DRS at all three the past two seasons) plus first base and his left-handed bat could help a platoon or be of use off the bench. Wade could win a reserve role due to his defense this spring, but more likely continues to shuffle between Minnesota and Triple-A.
Wade's ability to draw walks and play center field led to his callup in July as a temporary fill-in after hitting just .246/.392/.356 at Triple-A. He dislocated his right thumb after just his second big-league game and missed two months. He returned to play in some key spots in the September pennant race but hit just .196 in 69 plate appearances. Wade did draw 11 walks (15.9 BB%) and his excellent bat-to-ball skill translated against big-league pitching (13.0 K%). It was a very small sample, but he used the whole field and logged a respectable 21.3 LD%, so he could fare better in a larger stint in the majors. He was primarily called up for his ability to capably play all three outfield spots (-1 DRS at all three). Wade could win a reserve role due to his defense this spring, but he'll likely need to show more with his bat at Triple-A before getting an extended chance in the majors.
The 24-year-old reached Double-A Chattanooga last year, hitting for a strong .292/.397/.408 slash line, but was a bit older than his competition at age 23. Wade is a very challenging prospect to rank for fantasy purposes, as he can clearly hit, he just doesn't do much else. His upside may be hitting .290, get on base at a .390 clip and hit 10 home runs with 10 steals. He'll likely move up to Triple-A this summer and could reach majors in the second half.
Wade hit .318 with a .904 OPS at Low-A Cedar Rapids, as the 2015 ninth-round draft pick continues to impress at each step of the minors. His upside may be limited however, since at age 22 last season he was older than the competition. He doesn't add much speed for fantasy purposes, but his high contact rate and decent power could lead him to continue to surprise.
More Fantasy News