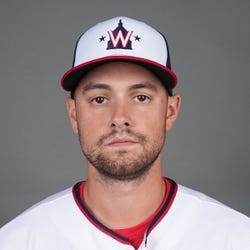 2022 Stats
AVG
.241
HR
17
RBI
52
R
62
SB
8
2023 Projections
AVG
HR
RBI
R
SB
Unlock Our Projections
2023 Fantasy Outlook
Thomas revitalized his career in Washington with an .853 OPS in 45 games after he was acquired at the 2021 trade deadline, and he followed up with a solid campaign last year. He saw significant playing time in all three outfield spots and posted a 96 wRC+ with 17 home runs, 52 RBI, 62 runs and eight steals in 146 games. Thomas' numbers don't jump off the page, but he was a decent lineup piece for a Nationals team that is now in a full rebuild after shipping Juan Soto to the Padres. The RBI and run totals are likely to be stunted by Washington's weak lineup, but Thomas could be a depth option for fantasy managers in 2023, as he should receive plenty of playing time if he continues to put up similar numbers. Read Past Outlooks
read more
RANKS
#303
ADP
#

* Exit Velocity and Barrels/PA % are benchmarked against 2019 data (min 400 PA) and Hard Hit Rate is benchmarked against last season's data (min 400 PA). See here for more exit velocity/barrels stats plus an explanation of current limitations with that data set.
BB/K
0.31
BB Rate
7.5%
K Rate
24.1%
BABIP
.291
ISO
.163
AVG
.241
OBP
.301
SLG
.404
OPS
.705
wOBA
.310
Exit Velocity
86.4 mph
Hard Hit Rate
27.2%
Barrels/PA
4.4%
Expected BA
.222
Expected SLG
.357
Sprint Speed
25.5 ft/sec
Ground Ball %
45.0%
Line Drive %
17.3%
Fly Ball %
37.7%
Advanced Batting Stats
Loading Advanced Batting Stats...
Additional Stats
Games By Position
Defensive Stats
Loading Games Played by Position...
Loading MLB Defensive Stats...
Batted Ball Stats
Loading Batted Ball Stats...
Stats Vs Upcoming Pitchers
Want more matchup stats?
View Lane Thomas vs. Pitcher Stats
Loading Matchup Stats...
Nationals Depth Chart
Our full team depth charts are reserved for RotoWire subscribers.
Subscribe Now
Recent RotoWire Articles Featuring Lane Thomas See More
Yahoo DFS Baseball: Wednesday Picks
123 days ago
123 days ago
Mike Barner’s Wednesday picks include an Angels stack of hitters against Oakland.
MLB FAAB Factor: Waiver Pickups of the Week
136 days ago
136 days ago
Jason Shebilske's weekly set of waiver recommendations includes Drew Smyly, who's been consistently strong since the start of August.
DraftKings MLB: Tuesday Breakdown
138 days ago
138 days ago
Erik Halterman checks in with plenty of insights for Tuesday’s DraftKings offering, which features 11 games worth of action to work with.
Yahoo DFS Baseball: Tuesday Picks
138 days ago
138 days ago
Mike Barner tees up Tuesday's Yahoo slate, recommending a Cardinals bat stack against Matt Bush and the Brewers.
NFBC Main Event: Fever Dream, Chapter 4
139 days ago
139 days ago
Ryan Rufe goes over the moves he made and the lessons he learned while managing his NFBC Main Event team over the last two months.
Past Fantasy Outlooks
2022
2021
2020
A fifth-round pick by Toronto in 2014, Thomas was traded first to St. Louis for international cap space and then to Washington last July in exchange for Jon Lester. He enjoyed a nice run with the Nationals following the move, slashing .270/.364/.489 with seven homers and four steals in 45 games. Because it was such a small sample, Thomas won't pop up on any leaderboards, but his Statcast hard-hit rate was pushing 50% after the trade. Many late bloomers have tempted us but failed to achieve sustained success, and Thomas may very well fit into that category in time, but the plate discipline was strong last year to go with the batted-ball profile. Plus this was not completely out of the blue; Thomas enjoyed a similar hot stretch at the major-league level with the Cardinals in 2019. This is not a bad flier to take if you need five outfielders, but know Thomas is still finding his footing in the big leagues.
It was reported in August that Thomas had tested positive for COVID-19. He returned to a reserve outfielder role at the end of the month, but Thomas simply could not provide the Cardinals with production, leaving the team little choice but to send him back to the alternate site Sept. 16. Thomas did not rejoin the club, but after a full offseason, he should be ready to compete for a roster spot in camp.
Thomas is one of 118 players in the history of MLB to hit a home run in their first major-league at-bat. He joined the St. Louis organization after being dealt from Toronto in exchange for international cap space. As Thomas has worked his way up the chain, he has positioned himself as the next candidate for Cardinals Devil Magic to strike where a seemingly average player performs at a higher level than his projections say he will. He doesn't have a great offensive profile, but will accept his walks and use his speed to take extra bases and swipe bases. The depth chart in front of him got a little less crowded after a couple outfielders were traded to Tampa Bay this offseason. There could eventually be an opportunity for Thomas to show what he can do with semi-regular work. He is a potential 15-20 steal guy with enough playing time.
More Fantasy News