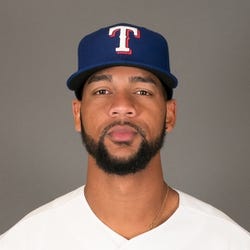 2022 Stats
AVG
.261
HR
5
RBI
34
R
39
SB
11
2023 Projections
AVG
HR
RBI
R
SB
Unlock Our Projections
2023 Fantasy Outlook
Taveras is in a tenuous situation in that his speed and defense are good skills, but the Rangers have plenty of players with that profile these days with both Eli White and Bubba Thompson possessing those same skills and at the same position as Taveras. Leody has the leg up, in a way, as he is out of options while the other two are not which all but guarantees Taveras breaks camp with a job whether it be with Texas or another club. His speed is elite, yet his stolen base track record is anything but as he was caught five times in 16 tries last season. The Triple-A numbers continue to offer some promise, but it would be nice if that success came east with him from Surprise, Arizona after spring training since he cannot go back to Round Rock without being exposed to waivers. Read Past Outlooks
read more
RANKSFrom Preseason
#