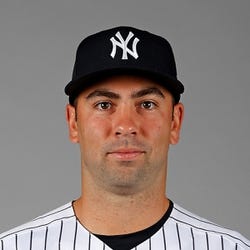 * Exit Velocity, Barrels/BBE %, Balls Hit 95+ MPH %, and Spin Rate are benchmarked against 2019 data (min 30 IP). See here for more exit velocity/barrels stats plus an explanation of current limitations with that data set.
K/BB
2.79
K/9
11.2
BB/9
4.0
HR/9
1.0
Fastball
95.8 mph
ERA
4.53
WHIP
1.64
BABIP
.407
GB/FB
2.03
Left On Base
71.6%
Exit Velocity
81.8 mph
Barrels/BBE
3.1%
Spin Rate
2126 rpm
Balls Hit 95+ MPH
29.9%
Swinging Strike
12.5%
Advanced Pitching Stats
Loading Advanced Pitching Stats...
Defensive Stats
Loading MLB Defensive Stats...
Stats Vs Today's Lineup
Want more matchup stats?
View Lou Trivino vs. Batter Stats
Loading Matchup Stats...
Yankees Depth Chart
Our full team depth charts are reserved for RotoWire subscribers.
Subscribe Now
Recent RotoWire Articles Featuring Lou Trivino
Closer Encounters: 2022 Saves in Review, Part 2
42 days ago
42 days ago
Ryan Rufe recaps the saves landscape in this year's NFBC Main Event and shares his own hits and misses from this past season.
Closer Encounters: 2022 Saves in Review, Part 1
48 days ago
48 days ago
Ryan Rufe recaps this past season's saves landscape. Just how many teams preferred closer committees over the conventional approach?
The Z Files: NFBC Holdem Rankings and Strategies
50 days ago
50 days ago
Todd Zola shares his gameplan and his rankings for NFBC Postseason Holdem contests.
NFBC Main Event: Season in Review & Lessons Learned
52 days ago
52 days ago
Ryan Rufe looks back on both his successes and his struggles in his first season in the NFBC Main Event.
MLB: Postseason Cheat Sheet and Strategy
54 days ago
54 days ago
Todd Zola tackles the MLB Postseason Cheat Sheet for RotoWire and discusses his approach to postseason leagues this year.
Past Fantasy Outlooks
2022
2021
2020
2019
Trivino's team-leading 22 saves in 2021 was also a career-high mark. He began the campaign by splitting closer duties with Jake Diekman, but he ultimately took over the role until he struggled in three consecutive outings in late August. Though those problems may have been caused by a back injury, Trivino's potential to serve as a consistent closer is worth calling into question. He lacks the typical swing-and-miss stuff of a closer (10.2 swinging strike rate; 21.6 K% in 2021) and also struggles with free passes (11 BB%). As a result, the primary factor that led to Trivino's success was his ability to induce groundballs at a 48% clip, which in turn helped him surrender only 0.6 HR/9. Given that the Athletics declined Diekman's team option and Sergio Romo also hit free agency, Trivino may begin the season as closer in Oakland. However, he should not be drafted among the elite relievers and fantasy managers should not rely on him for a full season of saves.
Trivino is one of those relievers with many interesting characteristics, but few results to show for it. He throws in the mid-to-upper 90s with his fastball, can touch 100 with it and matches that up with an effective cutter and curveball. Yet, 2020 saw him earn zero wins, zero saves and even allow a home run to Jeff Mathis. Trivino did significantly improve his strikeout rate despite losing two miles per hour off his fastball, throwing fewer cutters and using more fastballs. There was no new pitch here to credit a strikeout surge to as much as a significant change to his pitch utilization as well as some tweaks to his pitching mechanics (notably he shortened his arm action). He is more effective when attacking righties, but does not have the type of platoon splits that would limit him from high-leverage work should opportunities present themselves in 2021.
After bursting onto the scene with a 2.92 ERA and eight relief wins in 2018, Trivino got off to a great start to 2019. His season went downhill in a hurry and the point of decline can be tied closely to a thumb injury; Trivino posted a 6.27 ERA, 1.80 WHIP and 5.7 BB/9 following his return in May. He also battled an oblique injury and a cracked rib late in the year, with the latter cutting short his season. Despite Trivino's struggles, manager Bob Melvin continued to lean on the right-hander in high leverage for a good portion of the campaign. Trivino finished with the third-highest Leverage Index on the team, behind Blake Treinen and Liam Hendriks. The skills remain intriguing. Trivino throws 97 mph and even in a down year, his Barrel% and average exit velocity both ranked within the top 5% of the league. With better health, Trivino should bounce back and could even find his way into saves.
A relative unknown entering 2018, Trivino got the call up in mid-April and went on to become one of manager Bob Melvin's most trusted relievers at the back end of the Oakland bullpen. He did seem to run out of gas late in the year -- Trivino said it was just a lack of execution -- but his overall body of work was quite impressive. Working mostly four-seamer (97.6 mph)/cutter (92.4 mph), Trivino struck batters out at a 27.4% clip and held opponents to a sub-.200 batting average. He tied for 16th in the American League in appearances, racking up eight wins and four saves along the way, and finished with a 14.6% swinging-strike rate, which was a top-25 mark among qualified relievers. The estimators all suggest he overachieved by a decent margin, and regular save chances are highly unlikely with Blake Treinen, Fernando Rodney and Joakim Soria all ahead of him in the pecking order, but Trivino is on the radar as a ratios-eating staff filler.
More Fantasy News