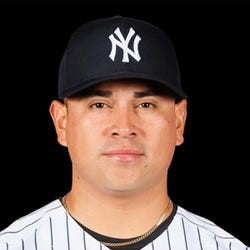 * Exit Velocity, Barrels/BBE %, Balls Hit 95+ MPH %, and Spin Rate are benchmarked against 2019 data (min 30 IP). See here for more exit velocity/barrels stats plus an explanation of current limitations with that data set.
K/BB
2.00
K/9
9.2
BB/9
4.6
HR/9
0.4
Fastball
93.6 mph
ERA
4.39
WHIP
1.29
BABIP
.290
GB/FB
2.11
Left On Base
59.8%
Exit Velocity
79.1 mph
Barrels/BBE
2.2%
Spin Rate
2125 rpm
Balls Hit 95+ MPH
20.7%
Swinging Strike
12.3%
Advanced Pitching Stats
Loading Advanced Pitching Stats...
Defensive Stats
Loading MLB Defensive Stats...
Stats Vs Today's Lineup
Want more matchup stats?
View Manny Banuelos vs. Batter Stats
Loading Matchup Stats...
Recent RotoWire Articles Featuring Manny Banuelos
FanDuel MLB: Monday Targets
92 days ago
92 days ago
Chris Morgan is recommending a Red Sox stack against Twins pitcher Dylan Bundy, who is only striking out 6.38 batters per nine innings.
MLB Barometer: Olympic Preview Edition
July 26, 2021
July 26, 2021
Erik Halterman offers up a special edition of his column, featuring a break down of Olympic baseball, while also listing this week’s risers and fallers, starting with Juan Soto.
DraftKings MLB: Tuesday Picks
June 11, 2019
June 11, 2019
Adam Zdroik suggests James Paxton as a solid pitching option Tuesday against the Mets.
Yahoo DFS Baseball: Tuesday Picks
June 11, 2019
June 11, 2019
Mike Barner looks over a loaded 15-game evening slate Tuesday, rolling with a Twins stack against Mike Leake and the Mariners.
FanDuel MLB: Tuesday Breakdown
June 11, 2019
June 11, 2019
Chris Bennett expects to see plenty of offensive fireworks again Tuesday, which makes a cheaper pitcher like the Cardinals' Dakota Hudson an enticing option.
Past Fantasy Outlooks
2016
2015
2014
2012
2011
History may show that the Braves did indeed heist Banuelos from the Yankees last winter, but the health concerns are not going away. The 5-foot-10 lefty was widely considered a top-50 prospect in baseball a few years back before he injured his elbow and ultimately underwent Tommy John surgery. It looked like Banuelos may have made it back to being his old self, dominating the International League with Triple-A Gwinnett to start the year. His success earned him a major league promotion, but Banuelos saw mixed results before more elbow issues popped up in late July. Another procedure was deemed necessary, this time a removal of bone chips from his left elbow, and Banuelos' status entering spring training is a bit up in the air. If healthy, he could make a push at a rotation spot, but Banuelos will be 25 by the time Opening Day rolls around and the clock is ticking on him making it as a starting pitcher.
It was only a few years ago that Banuelos was considered the top prospect in the Yankees’ system, and after posting an unexpectedly high 4.32 combined ERA in short stints at Triple-A in 2011 and 2012, he blew out his elbow and was shelved for almost 23 months. Fast forward to 2014, and Banuelos pitched 12.2 innings at High-A, 49 innings at Double-A and finished the season with 15 innings at Triple-A. He displayed excellent ratios at High-A and dreadful ratios at Triple-A, with a middling 44:19 K:BB ratio at Double-A, where the 49-inning sample size was largest. All told, his 2014 season should be considered a positive step forward, as he put up a 4.46 ERA and a 1.24 WHIP with 71 strikeouts in 76.2 innings across all three levels. After an offseason trade to Atlanta, he may compete for a rotation spot in spring training. However, the Braves will likely want to see better results in the upper levels of the minors before promoting Banuelos to the big league club.
Banuelos appeared to have all the upside in the world heading into the 2012 campaign, but injuries have since derailed his career and he missed all of 2013 following Tommy John surgery. To make matters worse, his walk rate jumped upon promotion to Double-A in 2011 (career 4.9 BB/9 at that level) and has only been marginally better (4.5 BB/9) at Triple-A. Before the injury, Banuelos featured a mid-90s fastball and a plus changeup with excellent movement, but it remains to be seen if he will still possess the same top-shelf stuff when he returns in 2014, most likely at Triple-A.
Banuelos lost just a bit of his luster in 2011, but he remains one of the top left-handed pitching prospects in the game. He's capable of occasional dominance, putting up a one-hitter against Pawtucket in his second to last start of the season, but he got smoked for five runs in just 1.2 innings against the same team five days later. Banuelos shows good velocity, but needs to work on his control after averaging 4.92 BB/9IP across two levels in 2011. Considering that he only tossed 124.2 innings last season he'll likely face an innings cap again in 2012. Banuelos will be just 21 when Opening Day rolls around, and if he can improve his command he should find his way into the Yankees rotation as early as this season.
Banuelos has rocketed up the Yankees' prospect list and is now arguably the most promising pitcher in the team's farm system. Although an appendectomy delayed the start of his 2010 season, he showed no signs of rust upon his return, posting a 2.23 ERA with 62 strikeouts and 14 walks in 44.1 innings (10 starts) for High-A Tampa. Near the end of the year he made three starts for Double-A Trenton, which is where he figures to begin the 2011 campaign. Clocked in the low-90s when the Yankees first signed him, the lefty reportedly hit 97 on the radar gun last season and has demonstrated significant improvement with his changeup as well. The best part is he is just 20 this season, and the Yankees love his potential as an eventual mid-rotation starter. He could make his big league debut as a 21-year-old in 2012.
More Fantasy News