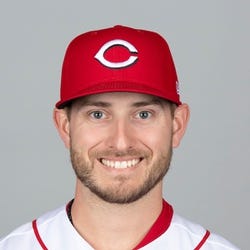 * Exit Velocity and Barrels/PA % are benchmarked against 2019 data (min 400 PA) and Hard Hit Rate is benchmarked against last season's data (min 400 PA). See here for more exit velocity/barrels stats plus an explanation of current limitations with that data set.
BB/K
1.00
BB Rate
16.0%
K Rate
16.0%
BABIP
.176
ISO
.000
AVG
.143
OBP
.280
SLG
.143
OPS
.423
wOBA
.217
Exit Velocity
84.6 mph
Hard Hit Rate
17.7%
Barrels/PA
0.0%
Expected BA
.157
Expected SLG
.181
Sprint Speed
25.2 ft/sec
Ground Ball %
47.1%
Line Drive %
11.8%
Fly Ball %
41.2%
Advanced Batting Stats
Loading Advanced Batting Stats...
Additional Stats
Games By Position
Defensive Stats
Loading Games Played by Position...
Loading MLB Defensive Stats...
Batted Ball Stats
Loading Batted Ball Stats...
Stats Vs Upcoming Pitchers
Want more matchup stats?
View Mark Payton vs. Pitcher Stats
Loading Matchup Stats...
White Sox Depth Chart
Our full team depth charts are reserved for RotoWire subscribers.
Subscribe Now
Past Fantasy Outlooks
2021
2020
The Reds thought enough of Payton to select him in the Rule 5 draft and then to trade for him from the A's when he didn't initially make the team, but that translated into only 20 plate appearances in the sprint season, and he spent all of September at the Reds' alternate training camp. As a result, we didn't get a chance to see whether his swing change in Las Vegas in 2019 would translate aywhere at sea level, let alone at the big league level. This will be his age-29 season, so unfortunately for Payton, getting him those chances aren't going to be a priority for the Reds. His spot on the Reds' 40-man roster is tenuous, but he's currently there and will get some looks in spring training, much as he did in 2020.
The uppercut swing isn't just a major league fad as evidenced by Payton's transformation. A line drive, gap hitter in his five seasons in the Yankees system, Payton was claimed off waivers by the Athletics in December 2018. He played for Triple-A Las Vegas last season, blasting 30 homers, two fewer than his minor-league total of the previous five seasons. The ball and hitter-friendly environment were big factors, but so was hitting considerably more fly balls. The Reds like what they saw from the 28-year-old outfielder and will give him a chance to win a bench spot after selecting him in the Rule 5 draft. Granted, Payton was old for his level, but a 17 percent strikeout rate and 10 percent walk rate last season bode well for a transition to MLB pitching. Watch Payton in the spring. If he hits, he could be a sneaky end-game play in NL-only. If he doesn't, the Reds will likely offer him back to Oakland.
More Fantasy News