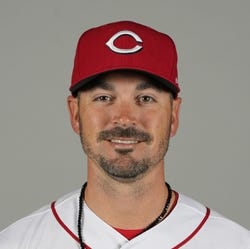 2022 Stats
AVG
.246
HR
3
RBI
23
R
31
SB
5
2023 Projections
AVG
HR
RBI
R
SB
Unlock Our Projections
2023 Fantasy Outlook
Reynolds was claimed off waivers by the hapless Reds early on last season and wound up seeing his most playing time in the majors to date as a 31-year-old. Unfortunately, his production - or lack thereof - basically mirrored what we had seen from him during his previous stints in the big leagues. Reynolds is still with the Reds but no longer on their 40-man roster and merely represents organizational filler with no fantasy appeal. Read Past Outlooks
read more
League AAA
Bats R
Throws R
40 Man No
Height 6'1"
Weight 205
DOB 12/3/1990
Born Tulsa, OK
College Arkansas
Drafted 2nd Rd 2012 NYM
$Signed a one-year contract with the Mets in December of 2021. Waived by the Mets in April of 2022. Claimed off waivers by the Reds in April of 2022.

* Exit Velocity and Barrels/PA % are benchmarked against 2019 data (min 400 PA) and Hard Hit Rate is benchmarked against last season's data (min 400 PA). See here for more exit velocity/barrels stats plus an explanation of current limitations with that data set.
BB/K
0.33
BB Rate
9.6%
K Rate
28.7%
BABIP
.348
ISO
.086
AVG
.246
OBP
.320
SLG
.332
OPS
.652
wOBA
.295
Exit Velocity
90.2 mph
Hard Hit Rate
29.3%
Barrels/PA
1.8%
Expected BA
.215
Expected SLG
.305
Sprint Speed
23.8 ft/sec
Ground Ball %
50.9%
Line Drive %
22.2%
Fly Ball %
26.9%
Advanced Batting Stats
Loading Advanced Batting Stats...
Additional Stats
Games By Position
Defensive Stats
Loading Games Played by Position...
Loading MLB Defensive Stats...
Batted Ball Stats
Loading Batted Ball Stats...
Stats Vs Upcoming Pitchers
Want more matchup stats?
View Matt Reynolds vs. Pitcher Stats
Loading Matchup Stats...
Reds Depth Chart
Our full team depth charts are reserved for RotoWire subscribers.
Subscribe Now
Recent RotoWire Articles Featuring Matt Reynolds See More
NL FAAB Factor: Waiver Pickups of the Week
165 days ago
165 days ago
Jan Levine believes one of baseball's top prospects will be called up soon enough.
NL FAAB Factor: Waiver Pickups of the Week
172 days ago
172 days ago
Jan Levine anticipates the return of a fairly high-profile pitcher to the LA rotation.
NL FAAB Factor: Waiver Pickups of the Week
235 days ago
235 days ago
A former All-Star headlines the offensive side of Jan Levine's latest review of available NL players.
Fantasy Baseball Injury Report: Haniger Likely Out Six Weeks
275 days ago
275 days ago
Jeff Stotts explains Mariner Mitch Haniger's Grade 2 high ankle sprain, which will keep him sidelined for at least six weeks.
NL FAAB Factor: Waiver Pickups of the Week
277 days ago
277 days ago
Jan Levine is back and wants you to know Taijuan Walker is still available in plenty of fantasy leagues.
Past Fantasy Outlooks
2018
2017
2016
Those riding the Triple-A shuttle usually endure several uncomfortable bus trips. At least Reynolds racked up a lot of frequent flyer miles jetting between Queens and Sin City. For the second straight season, Reynolds bounced between the Mets and the Las Vegas 51s multiple times as injuries hit the big club hard. The Mets were prescient as they had Reynolds playing a lot of outfield on the farm in April, adding chasing flies to his ability to play all around the infield. This is likely Reynolds' future -- someone filling in all over the diamond as his bat doesn't look like it will mature enough to be a regular. In 130 plate appearances last season, Reynolds had a higher OBP than SLG, but he did post a .320/.396/.484 line in Triple-A. Because he could earn eligibility at four spots, Reynolds is in play as a reserve in deep NL-only formats if he heads north as the utility man.
An injury to Ruben Tejada earned Reynolds a spot on the team's playoff roster in 2015, but with everyone back and healthy the following year, he didn't crack the Opening Day roster and instead headed back to Triple-A. He made several trips back and forth between the majors and minors throughout the season, but he didn't look overly impressive at the plate at either stop. He seemed especially overmatched against major league pitching, as he struck out in a whopping 35.4 percent of his plate appearances over 47 games. The hope is that these were just growing pains in his first cup of coffee in the big leagues, but he is starting to give off the whiff of a Quadruple-A hitter. He'll likely fight for a utility spot in spring training, but he may end up being better served getting to play every day in the minors.
Reynolds has been working his way through the Mets' minor league system, spending half of 2014 and all of 2015 at Triple-A Las Vegas. In 2014, the 25-year-old slashed an impressive .333/.385/.479. However, his numbers took a hit in 2015, hitting just .267/.319/.402. The Mets called him up in the NLDS when Ruben Tejada suffered a broken fibula, but he never saw any action. He's widely considered an average offensive prospect who is a versatile defender and the third-ranked short stop in the Mets' organization. With Asdrubal Cabrera and Neil Walker holding down the middle infield, it is unlikely that Reynolds role would be anything other than as a utility player should he make the Mets' roster in 2016.
More Fantasy News