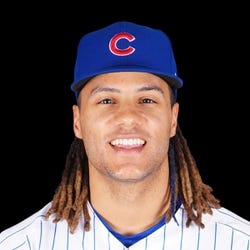 * Exit Velocity and Barrels/PA % are benchmarked against 2019 data (min 400 PA) and Hard Hit Rate is benchmarked against last season's data (min 400 PA). See here for more exit velocity/barrels stats plus an explanation of current limitations with that data set.
BB/K
0.26
BB Rate
9.6%
K Rate
37.0%
BABIP
.206
ISO
.033
AVG
.115
OBP
.250
SLG
.148
OPS
.398
wOBA
.204
Exit Velocity
86.6 mph
Hard Hit Rate
22.9%
Barrels/PA
4.1%
Expected BA
.169
Expected SLG
.247
Sprint Speed
24.7 ft/sec
Ground Ball %
38.2%
Line Drive %
26.5%
Fly Ball %
35.3%
Prospect Rankings History
Advanced Batting Stats
Loading Advanced Batting Stats...
Additional Stats
Games By Position
Defensive Stats
Loading Games Played by Position...
Loading MLB Defensive Stats...
Batted Ball Stats
Loading Batted Ball Stats...
Stats Vs Upcoming Pitchers
Want more matchup stats?
View Michael Hermosillo vs. Pitcher Stats
Loading Matchup Stats...
Cubs Depth Chart
Our full team depth charts are reserved for RotoWire subscribers.
Subscribe Now
Recent RotoWire Articles Featuring Michael Hermosillo
NL FAAB Factor: Waiver Pickups of the Week
73 days ago
73 days ago
Pitching remains Jan Levine's focus for the final week of September.
NL FAAB Factor: Waiver Pickups of the Week
248 days ago
248 days ago
Jan Levine kicks off the column for the season and dives right into all the NL positional battles.
Spring Training Job Battles: National League
249 days ago
249 days ago
Erik Halterman surveys the NL for the latest job battles, including the Dodgers where Tony Gonsolin is fighting for a rotation spot.
NL FAAB Factor: Waiver Pickups of the Week
September 12, 2021
September 12, 2021
Among his list of candidates, Jan Levine profiles a number of recent injury returnees who should be able to immediately help you out.
NL FAAB Factor: Waiver Pickups of the Week
September 5, 2021
September 5, 2021
September call-ups are here and Jan Levine chooses the best of the bunch while also detailing which lower-covered players have recently done well.
Past Fantasy Outlooks
2020
2019
2018
Hermosillo put together a .243/.330/.466 slash line with 15 homers, 43 RBI and six stolen bases over 64 games in the minors this season (62 contests at Triple-A Salt Lake), but when he got the call to the big leagues, he struggled to a .139 average with one homer, three RBI and a 41.3 K% over 18 matchups. Additionally, after sporting a 75.7 contact rate during 2017 at Triple-A, his contact rate has dipped to 68.1% in 2018 and 66% in 2019 (47.2% in the big leagues). While his strikeout rate continues to be a concern, he'll need to see consistent big-league at-bats before properly gauging his potential. Mike Trout and Justin Upton have locked down center and left field, respectively, so the 24-year-old will likely battle for time in right field heading into spring training.
The 2013 28th-round pick made his major-league debut in May and had a few stints with the Angels in 2018, but was unable to make a significant impact. None of Hermosillo's big-league stays even lasted two weeks until roster expansion in September, making it tough to get a read on his true talent. The 23-year-old had a quality season with Triple-A Salt Lake, posting a 117 wRC+ with 12 home runs and 10 stolen bases in 323 PA. One cause for concern is Hermosillo's strikeout rate, which rose from 21.5% in 2017 (combined between Double-A and Triple-A) to 26.9% last season, but the sporadic at-bats could have played a part. Mike Trout and Justin Upton have starting spots locked down, but Hermosillo could eventually push Kole Calhoun (0.0 fWAR last season) for the right-field job, and at least appears poised to serve as a fourth outfielder for the Angels.
Hermosillo very quietly hit nine home runs with 35 steals (on 48 attempts) between stops at High-A, Double-A and Triple-A as an age-appropriate 22-year-old, and is on the cusp of making his big-league debut. He appears to be a good candidate to serve as a fourth outfielder, with a chance for more. Hermosillo tweaked his mechanics slightly last season, allowing him to tap into more pull-side power. This was evident at Triple-A, where he posted a career-high .200 ISO. An above-average runner and good athlete, he has always been able to add value with his legs, and he has enough arm to handle an outfield corner. His walk rate plummeted from 11.8 percent to 5.4 percent after the promotion to Triple-A, but if he heads back there at the start of 2018, he will likely improve in that regard, which is important, as he may never hit better than .250 or .260. He could spend the majority of this season on the Angels' bench, and may even get time as a regular if they deal with injuries.
More Fantasy News