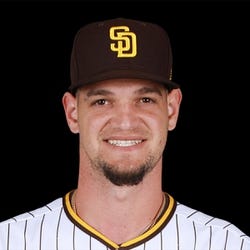 * Exit Velocity, Barrels/BBE %, Balls Hit 95+ MPH %, and Spin Rate are benchmarked against 2019 data (min 30 IP). See here for more exit velocity/barrels stats plus an explanation of current limitations with that data set.
K/BB
0.00
K/9
9.0
BB/9
0.0
HR/9
0.0
Fastball
94.9 mph
ERA
0.00
WHIP
0.50
BABIP
.216
GB/FB
1.00
Left On Base
100.0%
Exit Velocity
83.8 mph
Barrels/BBE
0.0%
Spin Rate
2221 rpm
Balls Hit 95+ MPH
30.0%
Swinging Strike
8.0%
Prospect Rankings History
Advanced Pitching Stats
Loading Advanced Pitching Stats...
Defensive Stats
Loading MLB Defensive Stats...
Stats Vs Today's Lineup
Want more matchup stats?
View Michel Baez vs. Batter Stats
Loading Matchup Stats...
Padres Depth Chart
Our full team depth charts are reserved for RotoWire subscribers.
Subscribe Now
Past Fantasy Outlooks
2021
2020
2019
2018
Baez has a good fastball and an even better changeup, but even so there does not appear to be a path to him becoming a major-league starting pitcher. He has struggled with back and shoulder issues throughout the minors, and also lacks a quality breaking pitch for facing big-league hitters. There are certainly pitchers in the big leagues who have made it work with just two pitches, but San Diego took the repertoire concerns along with the durability issues and decided the bullpen would be the best place for him. We've seen just 34 innings out of him at the big-league level the past two seasons, with Baez mainly working in lower-leverage situations in a crowded bullpen. That is unlikely to change in 2021, so expect more of the same for him. If he could find a serviceable third pitch -- a cutter perhaps -- things could get interesting.
Baez is a 6-foot-8, hard-throwing reliever who missed a lot of bats in his quick climb through the minor leagues, striking out 240 hitters in 195.2 innings of work. He was having a solid season at Double-A San Antonio after a rough 2018, so the Padres jumped him over El Paso to see what he could do at the big-league level. He had a decent debut, showcasing a fastball with velocity and spin both in the top 25th percentile that batters hit .190 against at the highest level. His preferred secondary pitch is a changeup that has a 16% swinging-strike rate. Both offerings had positive run values in 2019, but the Padres' bullpen is rather crowded for 2020 now that the club has added Drew Pomeranz to the late innings. Baez would be best served going to the minors to gain experience in high leverage situations because the club has a loaded bullpen and he would likely be limited to low leverage work initially.
This wasn't the first time a giant pitching prospect (Baez is 6-foot-8, 220 pounds) lost his command and failed to live up to expectations, and it won't be the last. One aspect of his profile that should have raised more skepticism last offseason was that he was entering his age-22 season and did not possess a plus secondary pitch -- his slider and changeup are solid, but neither are elite putaway weapons. Baez relies on his fastball, which is an overpowering mid-90s monster, thanks to excellent extension, when he is at his best. However, that pitch was sometimes sitting in the low-90s last year and he failed to command it with any consistency. Even in a down year, Baez climbed from High-A to Double-A, where he will likely return to start 2019. The Padres have a half dozen pitching prospects who are better than Baez, and considering his stuff could be dominant out of the bullpen, he may not have a long leash as a starter in the majors.
The Padres already made a massive international splash in the summer of 2016, so when they signed an unheralded 20-year-old righty out of Cuba that December, it flew completely under the radar. A year later and Baez is the top prospect from that historic international haul. He made his first professional start in the AZL and was then immediately sent up to Low-A. Baez stands an intimidating 6-foot-8, which allows him to get elite extension on an overpowering mid-90s fastball. He complements his heater with a hard slider and an above-average changeup. This advanced repertoire helped him post a ridiculous 32.9 K-BB percentage and an ERA that would have ranked second in the Midwest League had he qualified. The name of the game for Baez is consistency and control. If he displays both again in an assignment to High-A, he could move quickly to the upper levels of the minors. Building on the 63.2 innings he logged last year will be key. He has No. 2 starter upside and an elite late-inning reliever is his realistic floor.
More Fantasy News