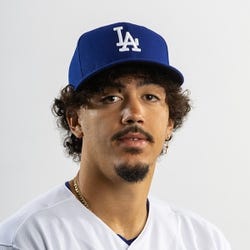 2022 Stats
AVG
.170
HR
1
RBI
8
R
4
SB
1
2023 Projections
AVG
HR
RBI
R
SB
Unlock Our Projections
2023 Fantasy Outlook
Vargas is simply one of the best pure hitters who is still technically a prospect. He hit .304/.404/.511 with a 14.6 K%, 31.7 Hard% and 17 home runs in 113 games as a 22-year-old at Triple-A and predictably played sparingly during a cup of coffee in the majors. His team context - the Dodgers seemingly always have a few quality options for his positions (first base, third base, left field) - is by far the biggest knock on Vargas in the short term. Vargas is not thought of as a burner, but he stole 17 bases on 22 attempts and has a 94th percentile sprint speed, so he could at least be a 4.5-category contributor with regular playing time. He is talented enough to take the left field job and run with it early this season, but it's possible that the Dodgers' crowded depth chart leads to Vargas being a post-hype sleeper in 2024. Read Past Outlooks
read more
RANKSFrom Preseason
#

* Exit Velocity and Barrels/PA % are benchmarked against 2019 data (min 400 PA) and Hard Hit Rate is benchmarked against last season's data (min 400 PA). See here for more exit velocity/barrels stats plus an explanation of current limitations with that data set.
BB/K
0.15
BB Rate
4.0%
K Rate
26.0%
BABIP
.206
ISO
.085
AVG
.170
OBP
.200
SLG
.255
OPS
.455
wOBA
.202
Exit Velocity
89.7 mph
Hard Hit Rate
42.9%
Barrels/PA
6.0%
Expected BA
.205
Expected SLG
.338
Sprint Speed
23.6 ft/sec
Ground Ball %
34.3%
Line Drive %
14.3%
Fly Ball %
51.4%
Prospect Rankings History
Advanced Batting Stats
Loading Advanced Batting Stats...
Additional Stats
Games By Position
Defensive Stats
Loading Games Played by Position...
Loading MLB Defensive Stats...
Batted Ball Stats
Loading Batted Ball Stats...
Stats Vs Upcoming Pitchers
Want more matchup stats?
View Miguel Vargas vs. Pitcher Stats
Loading Matchup Stats...
Dodgers Depth Chart
Our full team depth charts are reserved for RotoWire subscribers.
Subscribe Now
Recent RotoWire Articles Featuring Miguel Vargas
2023 Fantasy Baseball Rankings - Way Too Early Top 300 Draft Ranks
42 days ago
42 days ago
James Anderson provides a way too early top 300 rankings for those who have the itch to start drafting for 2023.
The Z Files: NFBC Holdem Rankings and Strategies
52 days ago
52 days ago
Todd Zola shares his gameplan and his rankings for NFBC Postseason Holdem contests.
DraftKings MLB: Saturday Breakdown
61 days ago
61 days ago
Dan Marcus feels Cristian Javier can pick up some fantasy points at home versus the Rays.
MLB Barometer: Risers and Fallers
73 days ago
73 days ago
Erik Halterman looks at who's hot and who's not as the calendar winds down on the season and notes that Yoan Moncada is finally hitting the way he has in the past.
MLB Hitting Prospect Draft For 2023
85 days ago
85 days ago
James Anderson conducted a draft of hitting prospects for 2023 redraft value only, in which he landed Vaughn Grissom with the No. 4 overall pick.
Past Fantasy Outlooks
2022
2020
2019
Always seen as a bat-first player with a strong hit tool, Vargas solidified himself as a top-50 prospect for dynasty leagues by hitting for significantly more power than he had to date against full-season pitching. He hit .319/.380/.526 with 23 home runs, a 16.4 K% and an 8.3 BB% in 120 games at High-A and Double-A. He was at least 40% better than the average hitter at each level and clearly has one of the better hit tools in the minors. Vargas will chase out of the zone a decent amount, but his ability to make contact and do damage on pitches in the zone allowed him to have a dominant season at an appropriate age (21) for his levels. Vargas got work at third base, second base and first base last season and could qualify at some combination of those positions in the majors. The Dodgers have a never-ending stream of infielders marching to the majors, but Vargas might be the best hitter of those who have yet to reach The Show. He will likely spend most of the year at Triple-A and could earn the call sometime this summer.
Vargas is a great hitter with an uncertain defensive home in an organization with seemingly unlimited depth on the position player side. This makes him a tricky player to evaluate for dynasty leagues. His 19.4 Hard% is a very poor mark for a player with his defensive profile, but considering over 35% of his hits went to the opposite field and he played half the year as a 19-year-old at High-A, we can excuse the lack of blistering contact for now. Vargas is a hitter first, and a power hitter second, but the power will have to come eventually for him to get playing time. As a 6-foot-3, 205-pound third baseman who throws and hits right-handed, it will be imperative that he maintains the lateral agility necessary to stick at the hot corner, as the Dodgers probably won't find room for a player of his ilk at first base. He kept his weight in check last season, which is an encouraging sign.
After a two-year absence from competitive baseball, Vargas burst onto the dynasty-league radar by leading the Pioneer League with a .394 AVG before earning a promotion to the Midwest League. Vargas, who turned 19 in November, defected from Cuba when he was 16 and signed with the Dodgers for $300,000 in September of 2017. He was too advanced for rookie-level pitchers, but met some resistance at Low-A. Vargas used the whole field at all three stops, but after his promotion to Low-A, his LD% plummeted from 25.3% to 17.9% and his GB% spiked from 38.0% to 51.8%, which largely explains his drop in production. Already 6-foot-3, 200 pounds, it is quite possible Vargas (R/R) will be a below-average defensive third baseman by the time he is big-league ready, but the Dodgers won't move him to first base until they absolutely have to. His offensive production has a chance to be good enough for mediocre defense to be tolerated at third base.
More Fantasy News