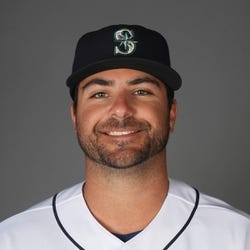 * Exit Velocity and Barrels/PA % are benchmarked against 2019 data (min 400 PA) and Hard Hit Rate is benchmarked against last season's data (min 400 PA). See here for more exit velocity/barrels stats plus an explanation of current limitations with that data set.
BB/K
0.43
BB Rate
11.4%
K Rate
26.8%
BABIP
.273
ISO
.107
AVG
.206
OBP
.302
SLG
.313
OPS
.615
wOBA
.282
Exit Velocity
88.7 mph
Hard Hit Rate
31.9%
Barrels/PA
2.0%
Expected BA
.210
Expected SLG
.302
Sprint Speed
19.8 ft/sec
Ground Ball %
33.0%
Line Drive %
23.1%
Fly Ball %
44.0%
Prospect Rankings History
Advanced Batting Stats
Loading Advanced Batting Stats...
Additional Stats
Games By Position
Defensive Stats
Loading Games Played by Position...
Loading MLB Defensive Stats...
Batted Ball Stats
Loading Batted Ball Stats...
Stats Vs Upcoming Pitchers
Want more matchup stats?
View Mike Ford vs. Pitcher Stats
Loading Matchup Stats...
Angels Depth Chart
Our full team depth charts are reserved for RotoWire subscribers.
Subscribe Now
Recent RotoWire Articles Featuring Mike Ford
AL FAAB Factor: Waiver Pickups of the Week
87 days ago
87 days ago
Erik Siegrist takes a look at the AL free-agent pool as Kerry Carpenter heats up for the Tigers.
AL FAAB Factor: Waiver Pickups of the Week
101 days ago
101 days ago
Erik Siegrist looks over the free-agent pool in the AL before September roster expansion and thinks Shea Langeliers could provide a boost at a shallow position.
NL FAAB Factor: Waiver Pickups of the Week
129 days ago
129 days ago
With only a couple days before the trade deadline, Jan Levine checks out a few NLers who could benefit from upcoming transactions.
Todd's Takes: Lack of an Appeal and Lack of Appeal
159 days ago
159 days ago
Todd Zola shares his thoughts on Thursday's MLB action, which left him unconvinced by Shane Bieber.
NL FAAB Factor: Waiver Pickups of the Week
164 days ago
164 days ago
Among his recommendations this week, Jan Levine profiles a couple middle-infield phenoms who provide plenty of potential.
Past Fantasy Outlooks
2021
2020
2018
Ford's scorching close to the 2019 campaign led some hot takers to suggest he could challenge Luke Voit for the Yankees' first-base job in 2020. Instead, Voit blossomed into one of the league's premier home-run hitters while Ford took a huge step back, ultimately spending the final weeks of the regular season at the team's alternate training site. Statcast tells the story; nearly all metrics indicative of power -- including barrel rate, launch angle, average exit velocity and hard-hit percentage -- showed moderate-to-steep drops, leading to an over 100-point dip in Ford's xSLG (from .501 to .395). The lumbering first baseman's flyball rate dropped from 44.3% to 30.5% while his groundball rate rose by over 13 percentage points. Ford doesn't strike out much (19.0 K%), and his low .140 BABIP is bound to come up, but he'll need to rediscover his power stroke to maintain a big-league role.
You could look at the season Ford put up at the majors last year and make some assumptions, most of which would be incorrect. The lefty hit more homers off lefties than righties last year. He hit 10 of his 12 homers away from Yankee Stadium. He looks like a softball player, but his Kevin Maas-like performance moved the needle on some fantasy rosters down the stretch when he hit 11 homers and drove in 23 runs while scoring 23 runs over the final two months of the season in part-time duty. His average exit velocity was equal to Matt Olson's last season, and he hit 35 homers between Triple-A and the majors with strong walk and contact rates. He appears to be a bit of a late bloomer, much like his platoon partner, Luke Voit. Perhaps Ford can take over the full-time job if 2019 was the real McCoy. It was a significant step forward from a rather mediocre minor-league career.
Ford was one of the few hitters selected in this winter's Rule 5 draft with a chance to be fantasy-relevant this season. The Yankees, who might have the most minor-league depth in the game, especially in the upper levels, left Ford unprotected and the Mariners selected him with the 11th pick. The 25-year-old first baseman went undrafted out of Princeton but has raked at every stop in the minors, most notably walking significantly more than he struck out (72:94 K:BB) while hitting 20 home runs in 429 at-bats between Double-A and Triple-A last year. The Mariners traded for Ryon Healy to handle the first-base duties and they hope to carry 13 pitchers for much of the season, so Ford will have to really impress this spring to make the roster. However, he hits left-handed while Healy hits right-handed, so it seems he will either make the team and start against righties, or be offered back to the Yankees after spring training.
More Fantasy News