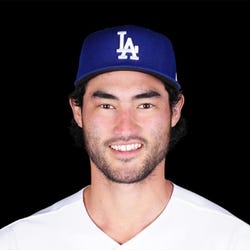 * Exit Velocity, Barrels/BBE %, Balls Hit 95+ MPH %, and Spin Rate are benchmarked against 2019 data (min 120 IP). See here for more exit velocity/barrels stats plus an explanation of current limitations with that data set.
K/BB
2.23
K/9
7.1
BB/9
3.2
HR/9
0.8
Fastball
93.8 mph
ERA
5.45
WHIP
1.46
BABIP
.334
GB/FB
1.41
Left On Base
62.7%
Exit Velocity
80.4 mph
Barrels/BBE
3.8%
Spin Rate
2314 rpm
Balls Hit 95+ MPH
19.2%
Swinging Strike
8.4%
Prospect Rankings History
Advanced Pitching Stats
Loading Advanced Pitching Stats...
Defensive Stats
Loading MLB Defensive Stats...
Stats Vs Today's Lineup
Want more matchup stats?
View Mitch White vs. Batter Stats
Loading Matchup Stats...
Blue Jays Depth Chart
Our full team depth charts are reserved for RotoWire subscribers.
Subscribe Now
Recent RotoWire Articles Featuring Mitch White
Collette Calls: Beltway Pitching Projects
8 days ago
8 days ago
Jason Collette examines a pair of young starting pitchers with plenty of potential but unimpressive 2022 numbers.
MLB: Postseason Cheat Sheet and Strategy
62 days ago
62 days ago
Todd Zola tackles the MLB Postseason Cheat Sheet for RotoWire and discusses his approach to postseason leagues this year.
MLB Picks Tonight: Expert MLB Bets for Tuesday, October 4
64 days ago
64 days ago
Michael Rathburn identifies his best MLB bets from Tuesday's mega slate of games. Follow RotoWire for more MLB picks all season.
FanDuel MLB: Tuesday Targets
64 days ago
64 days ago
Chris Bennett checks out Tuesday's slate and thinks that Cedric Mullins and the Orioles make for an intriguing stack, weather permitting.
MLB Bets at DraftKings Sportsbook: MLB Player Props and Picks for Tuesday, October 4
64 days ago
64 days ago
Mike Barner lines up his best MLB bets available at the DraftKings Sportsbook for Tuesday's baseball action. Visit RotoWire for MLB picks all season.
Past Fantasy Outlooks
2022
2018
2017
White was a legitimate prospect for dynasty leagues in 2017, when he missed bats and prevented runs at a strong clip at High-A and Double-A. However, he fell off the map in many dynasty leagues due to inconsistent performance in 2018 and 2019. In 2020, it seemed like he had moved into a long-term reliever role, but he showed well as a starter at Triple-A and in the majors last season, and is now a legitimate sleeper entering his age-27 campaign. White's mid-90s fastball is at least an above-average offering, thanks to his strong command of the pitch -- he locates it in all four quadrants. The big improvement last year was to his mid-to-upper-80s slider, which is now a clear plus pitch. He only threw his slider 18 percent of the time, so upping that usage at the expense of his four-seamer and low-80s curveball could be advantageous. At 6-foot-3, 210 pounds, White has good size and was able to build up to just over 90 innings. He should be allowed to compete for a rotation spot this spring, and even if he has to open the year in the Triple-A rotation, White appears talented enough to have success when he is inevitably called upon sometime this year.
It is not an overly exciting profile, but White's polish and proximity to the big leagues makes him rosterable in most dynasty leagues. He was not as good as his 2.57 ERA at Double-A suggests, but was still very solid for a pitcher with such little pro experience. White was touching 97 mph in spring training but was down to 92 mph in the fall instructional league, so fatigue might have been a factor at the end of his first full season. If his stuff bounces back, he will feature a 92-95 mph fastball that can play as a plus pitch thanks to excellent life, a potentially plus slider/cutter, an average curveball and solid command. That's the repertoire of a No. 3 or No. 4 starter. He missed six weeks with a toe injury last year, but has not dealt with any arm issues since undergoing Tommy John surgery in college. While he hasn't built up a significant workload yet, he has excellent size (6-foot-4, 207 pounds) and should head to Triple-A for his age-23 season.
White is still learning how to pitch, having barely taken the mound in high school and missing time after undergoing Tommy John surgery in 2014. Still, he saw an uptick in fastball velocity during his final season at Santa Clara, developed a nasty cutter/slider, an emerging curveball and has even been working on a changeup. White's strikeout stuff saw him rise to a second-round selection in the 2016 draft, and he did not let up upon entering the minors. Shuffling between the starting rotation and the bullpen, White did not allow a run during his 22 innings, finishing the season at High-A Rancho Cucamonga with a 30:6 K:BB. The 6-foot-4, 210-pound White has the frame, control and necessary pitches to become a legitimate starter, though the Dodgers could eventually end up sending him to the bullpen. He will be 22 years old to begin the 2017 campaign, likely at Low-A, but he could advance quickly with a hot start.
More Fantasy News