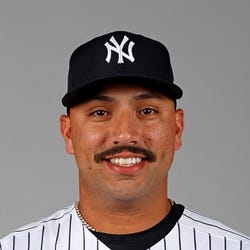 Out
Injury Groin
Est. Return 2/1/2023
2022 Stats
W-L
12-4
ERA
2.44
WHIP
0.92
K
163
SV
0
2023 Projections
W-L
ERA
WHIP
K
SV
Unlock Our Projections
2023 Fantasy Outlook
If you go back and look at Cortes's 2022 outlook, you can see he teased at what was possible, but without a large body of work, everyone was right to be skeptical of what Cortes would be as a starter. Those who took the chance in the late rounds were greatly rewarded by one of the best late round steals in 2022 as the lefty picked up where he left off in 2021 for most of the 2022 season. Cortes uses varying arm angles, deliveries, and pitches to frustrate hitters all season. 75% of what he threw were four-seamer and cutters, and those two pitches were paired so well that the league hit below .200 against both pitches while all five of his offerings had whiff rates above 20%. In 330 innings of work, he has a career 80% LOB rate and a .266 BABIP, so his 2022 numbers ( 79%, .243) are not terribly out of line and a continuation of what he did in 2021. The stuff is not paritcularly special, but his ability to spin and sequence it is certainly special and being a lefty in Yankee Stadium doesn't hurt either. The big question is if he can put up consecutive seasons of workload as he has never done so. Read Past Outlooks
read more
RANKSFrom Preseason
#

* Exit Velocity, Barrels/BBE %, Balls Hit 95+ MPH %, and Spin Rate are benchmarked against 2019 data (min 120 IP). See here for more exit velocity/barrels stats plus an explanation of current limitations with that data set.
K/BB
4.29
K/9
9.3
BB/9
2.2
HR/9
0.9
Fastball
91.8 mph
ERA
2.44
WHIP
0.92
BABIP
.245
GB/FB
0.79
Left On Base
82.5%
Exit Velocity
79.3 mph
Barrels/BBE
3.5%
Spin Rate
2298 rpm
Balls Hit 95+ MPH
18.4%
Swinging Strike
11.8%
Advanced Pitching Stats
Loading Advanced Pitching Stats...
Defensive Stats
Loading MLB Defensive Stats...
Stats Vs Today's Lineup
Want more matchup stats?
View Nestor Cortes vs. Batter Stats
Loading Matchup Stats...
Yankees Depth Chart
Our full team depth charts are reserved for RotoWire subscribers.
Subscribe Now
Recent RotoWire Articles Featuring Nestor Cortes
Yahoo DFS Baseball: Sunday Picks
45 days ago
45 days ago
Chris Morgan shares his top plays for Yahoo's MLB daily fantasy contests, with Jose Altuve's recent slump dropping his salary far more than it should.
MLB Picks Tonight: MLB Playoff Bets for Sunday, October 23
45 days ago
45 days ago
Walter Hand expects the Astros to close things out in Game 4 against the Yankees on Sunday, with Lance McCullers likely to get the win.
DraftKings MLB: Sunday Breakdown
45 days ago
45 days ago
We could have our World Series matchup decided by the end of the day. Chris Morgan looks at which players are primed to produce on Sunday.
2023 Fantasy Baseball Rankings - Way Too Early Top 300 Draft Ranks
48 days ago
48 days ago
James Anderson provides a way too early top 300 rankings for those who have the itch to start drafting for 2023.
ALCS Betting Preview: Yankees vs. Astros Odds, Picks and Predictions
49 days ago
49 days ago
Erik Halterman gives his ALCS betting preview with a detailed breakdown for the Yankees-Astros clash along with his series picks and best bets.
2022 Fantasy Outlook
Cortes, when not running around Mushroom Kingdom attempting to avoid Bowser, enjoyed a surprising season for the Yankees. It was his second stint with the club, but this time he worked as a bandaid in the rotation rather than in low-leverage situations. He used a variety of arm angles, timing mechanisms and pitches making the most of his below-average stuff to effectively disrupt the timing of the opposing hitters. He is a throwback to the pitching of 30 years ago when guys relied on location and guile rather than velocity; somehow the league hit .196 off his fastball (.189 xBA!) when the pitch averaged 90.7 mph. Pitching where he does, and in the division he does, leaves Cortes with a thin margin for error, and he's been susceptible to the long ball throughout his career (2.0 HR/9 career rate). Cortes is really only rosterable if he were to secure a starting rotation spot in spring training.
More Fantasy News