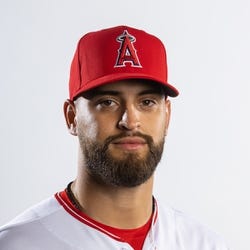 2022 Stats
W-L
6-9
ERA
2.91
WHIP
1.34
K
151
SV
0
2023 Projections
W-L
ERA
WHIP
K
SV
Unlock Our Projections
2023 Fantasy Outlook
Sandoval was healthy all year but only totaled 148.2 innings as the Angels rolled with a six-man rotation. The team was also cautious with Sandoval specifically, allowing him to throw 100-plus pitches four times in 27 starts. Sandoval is a unique pitcher not just because he throws lefty but because he throws his slider and changeup as his two primary pitches -- at least he did in 2022. The slider held up under heavier usage and the change was a good swing-and-miss pitch for him with a 44.5 Whiff%, according to Statcast. His four-seamer got knocked around to the tune of a .372 average and 14 extra-base hits, so things can go awry when he gets behind in the count and has to throw the fastball over the plate. Throwing so much breaking and offspeed stuff results in a good number of groundballs, and when combined with the strikeouts, Sandoval is an exciting arm for fantasy purposes. That said, don't expect many two-start weeks and don't expect him to approach 200 innings. Read Past Outlooks
read more
RANKSFrom Preseason
#

* Exit Velocity, Barrels/BBE %, Balls Hit 95+ MPH %, and Spin Rate are benchmarked against 2019 data (min 120 IP). See here for more exit velocity/barrels stats plus an explanation of current limitations with that data set.
K/BB
2.52
K/9
9.1
BB/9
3.6
HR/9
0.5
Fastball
93.2 mph
ERA
2.91
WHIP
1.34
BABIP
.328
GB/FB
1.66
Left On Base
76.1%
Exit Velocity
81.0 mph
Barrels/BBE
3.3%
Spin Rate
2108 rpm
Balls Hit 95+ MPH
22.2%
Swinging Strike
13.5%
Prospect Rankings History
View Complete Patrick Sandoval Prospect Ranking History
Advanced Pitching Stats
Loading Advanced Pitching Stats...
Defensive Stats
Loading MLB Defensive Stats...
Stats Vs Today's Lineup
Want more matchup stats?
View Patrick Sandoval vs. Batter Stats
Loading Matchup Stats...
Angels Depth Chart
Our full team depth charts are reserved for RotoWire subscribers.
Subscribe Now
Recent RotoWire Articles Featuring Patrick Sandoval
2023 Fantasy Baseball Rankings - Way Too Early Top 300 Draft Ranks
44 days ago
44 days ago
James Anderson provides a way too early top 300 rankings for those who have the itch to start drafting for 2023.
Yahoo DFS Baseball: Monday Picks
61 days ago
61 days ago
Mike Barner sets up Monday’s Yahoo slate, turning to Mets slugger Pete Alonso against the Nationals.
DraftKings MLB: Monday Breakdown
61 days ago
61 days ago
Dan Marcus brings us his picks for the final Monday slate of the regular season.
FanDuel MLB: Monday Targets
61 days ago
61 days ago
Randy Arozarena has 20 home runs and 32 stolen bases in 2022, and is hitting against Rich Hill, who has a 5.19 ERA at home.
Weekly Pitcher Rankings: Decisions, Decisions
63 days ago
63 days ago
Todd Zola ranks starting pitchers ahead of a short week in which workloads are full of uncertainty.
Past Fantasy Outlooks
2022
2021
2020
Sandoval began the season toiling for Triple-A Salt Lake but was called up before their season commenced. Initially, Sandoval was a swingman, but it wasn't long before he entered the rotation full time. His season ended prematurely in mid-August with a left lumbar stress reaction. Granted, it was only a 36.2 inning sample from the previous campaign, but Sandoval exhibited significant improvement, best exemplified by a 15.2% swinging strike mark supporting a 26% K%. Sandoval's walk rate could use some work as demonstrated by a 9.9% BB%. Just 25 years old, Sandoval has time to hone his five-pitch mix to improve control. If successful, front end of the rotation status awaits. Short term, keep in mind the Angels could deploy a six-man rotation, but if healthy, Sandoval still merits a spot on a mixed league roster.
Sandoval's chances of making the 2020 Opening Day roster increased after new Angels manager Joe Maddon announced plans for a six-man rotation. However, Sandoval was diagnosed with COVID-19 and was late to summer camp, putting the spot in jeopardy. He was able to catch up and served as the sixth starter around a couple trips to the alternate training facility when a sixth starter wasn't needed. For the year, Sandoval struggled with homers, allowing 10 in just 36.2 innings despite inducing grounders at a 55.3% clip. Sandoval altered his pitch mix, throwing more sliders in lieu of his curveball and changeup. His slider and change are thrown with similar velocity -- only eight-mph slower than his four-seamer which may help explain the homers as batters are better able to sit on a pitch. Sandoval is still developing, but it appears he's capped at a back-end starter, useful as a streamer.
Sandoval made his big-league debut in early August and held down a rotation spot for the rest of the season despite largely mediocre results. His 24.9 K% was strong, but it came with a poor 11.2 BB%. A 21.4% HR/FB rate also held him back and indicates potential positive regression going forward, while his 4.02 xFIP paints a fairly optimistic picture of what he's been able to do thus far. His fastball averaged 93 mph (fine for a southpaw) and he pairs it with a swing-and-miss changeup, a high-spin curveball and fourth-pitch slider. Even with the unconvincing start to his career, he enters 2020 poised to either break camp in the rotation or serve as the next man up in the case of an injury, and injuries typically hit this rotation harder than most. His command issues make him a WHIP liability, but he should be a solid source of strikeouts if he gets the innings.
More Fantasy News