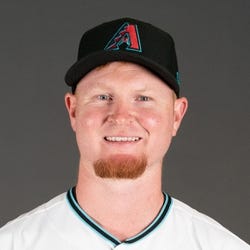 * Exit Velocity and Barrels/PA % are benchmarked against 2019 data (min 400 PA) and Hard Hit Rate is benchmarked against last season's data (min 400 PA). See here for more exit velocity/barrels stats plus an explanation of current limitations with that data set.
BB/K
0.42
BB Rate
10.1%
K Rate
24.2%
BABIP
.262
ISO
.147
AVG
.220
OBP
.300
SLG
.367
OPS
.667
wOBA
.296
Exit Velocity
87.9 mph
Hard Hit Rate
26.0%
Barrels/PA
6.5%
Expected BA
.216
Expected SLG
.379
Sprint Speed
23.2 ft/sec
Ground Ball %
43.1%
Line Drive %
13.8%
Fly Ball %
43.1%
Prospect Rankings History
View Complete Pavin Smith Prospect Ranking History
Advanced Batting Stats
Loading Advanced Batting Stats...
Additional Stats
Games By Position
Defensive Stats
Loading Games Played by Position...
Loading MLB Defensive Stats...
Batted Ball Stats
Loading Batted Ball Stats...
Stats Vs Upcoming Pitchers
Want more matchup stats?
View Pavin Smith vs. Pitcher Stats
Loading Matchup Stats...
Diamondbacks Depth Chart
Our full team depth charts are reserved for RotoWire subscribers.
Subscribe Now
Recent RotoWire Articles Featuring Pavin Smith
NL FAAB Factor: Waiver Pickups of the Week
157 days ago
157 days ago
Jan Levine has identified a few relief pitching options, including one leading the way in Atlanta.
Yahoo DFS Baseball: Sunday Picks
185 days ago
185 days ago
Chris Morgan previews the Sunday Yahoo baseball slate as Zac Gallen looks to put down the Pirates.
Yahoo DFS Baseball: Tuesday Picks
190 days ago
190 days ago
Mike Barner dives into Tuesday’s slate, helping you build a winning Yahoo lineup with his player recommendations.
NL FAAB Factor: Waiver Pickups of the Week
192 days ago
192 days ago
Atlanta's top hitting prospect is with the club and Jan Levine sees him playing enough where he should be added ASAP.
DraftKings MLB: Tuesday Breakdown
197 days ago
197 days ago
Dan Marcus recommends checking out a Mariners bat stack at home against Oakland on Tuesday.
Past Fantasy Outlooks
2022
2021
2020
2019
2018
Now 589 plate appearances into his big-league career, Smith has proven that his contact-heavy approach in the minors translates to the highest level. He's struck out at a 19.4% clip and managed a respectable .329 on-base percentage in that span, solid marks given the context of the modern game. Unfortunately, his inability to hit for power has also carried over from his time in the minors. He's hit groundballs at a 47 percent clip (8.9 degree launch angle), which has limited him to only 12 home runs and a .136 ISO. That's caused some difficulty in determining exactly how Smith fits into the Diamondbacks' - or any club's - future plans. Smith doesn't hit for enough power to provide value at first base, his natural position. Smith has also picked up at-bats at all three outfield positions, but his fit defensively is questionable, particularly given the lack of offensive upside he's shown to this point.
Plate discipline is one of the most transferable skills between the minors and majors, so it's no surprise that Smith posted a better-than-average walk rate (11.4%) and strikeout rate (18.2%) during his first stint as a big-leaguer last season. The sample size (44 at-bats) is admittedly small, but given Smith's consistently elite control of the zone during his collegiate and professional career, there is little doubt about the 2017 first-round pick's ability to get on base. What has prevented Smith from gaining more prospect buzz, however, is his questionable power. Over 1,074 minor-league at-bats, he has hit only 23 balls out of the park (46.7 AB/HR), and he collected just one homer in 37 at-bats with the Diamondbacks last season. The poor power stroke is especially concerning given Smith's primary position (first base), and it could block his path to regular major-league at-bats should it fail to blossom.
Smith's batting profile has been remarkably consistent year to year in his three professional seasons. His strikeout rate has ranged from 10.8% to 12.9% while his walk rate has ranged from 11.3% to 12.1%. He had 12 home runs in 507 plate appearances at Double-A after totaling 11 in 504 plate appearances at High-A in 2018. These plate skills are promising, but those power numbers are a problem, though the 2017 seventh-overall pick did at least show more gap power last year with 29 doubles and six triples, lifting his ISO nearly 40 points. If Smith is to become a major-league regular at first base, he will need more of those doubles and triples to clear the fences. We saw a massive spike in power across baseball in 2019 and many players who were not expected to hit for power did. Keep an eye out to see if more power shows up at Triple-A. It is the piece of the puzzle that will either make or break Smith.
The 2017 seventh overall pick hit a mediocre .255/.343/.392 in 120 games for High-A Visalia, smacking 11 homers after failing to hit a single one in his first 51 professional games for Low-A Hillsboro the season prior. Smith demonstrated excellent control of the zone, walking 11.3% of the time while striking out in just 12.9% of his plate appearances. Players who have these kind of advanced plate skills sometimes tap into more power as they age, or they benefit from the bouncier big-league baseball. If the power never comes it will be hard for Smith to clear the very high offensive bar required for a major-league first baseman.
A college first baseman who received the eighth-highest bonus ($5.01 million) in the 2017 draft, Smith proved after signing that he is a unique offensive talent. He had more walks (27) than strikeouts (24) while finishing third in the Northwest League in average (.318) and OBP (.401) and fourth in wRC+ (136), yet he failed to hit a home run. Of the qualified hitters in that league, he was one of only seven players who failed to homer, which is concerning given his age (21) and position. It is hard to find recent precedent for a college first baseman failing to hit for power in his pro debut and going on to be a quality big-league first baseman. Smith's backers will point to his excellent hit tool -- perhaps the best in the entire 2017 draft -- and say that he will add power as he gets more comfortable against pro pitching. Unless he is going at a nice discount in dynasty drafts, it is probably wise to let someone else bet on the power showing up.
More Fantasy News