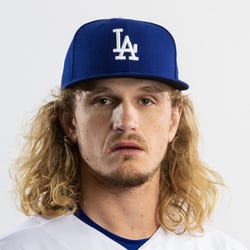 * Exit Velocity, Barrels/BBE %, Balls Hit 95+ MPH %, and Spin Rate are benchmarked against 2019 data (min 30 IP). See here for more exit velocity/barrels stats plus an explanation of current limitations with that data set.
K/BB
4.79
K/9
9.9
BB/9
2.1
HR/9
1.8
Fastball
94.2 mph
ERA
4.72
WHIP
1.10
BABIP
.281
GB/FB
0.87
Left On Base
67.7%
Exit Velocity
82.6 mph
Barrels/BBE
5.6%
Spin Rate
2334 rpm
Balls Hit 95+ MPH
20.1%
Swinging Strike
11.5%
Advanced Pitching Stats
Loading Advanced Pitching Stats...
Defensive Stats
Loading MLB Defensive Stats...
Stats Vs Today's Lineup
Want more matchup stats?
View Phil Bickford vs. Batter Stats
Loading Matchup Stats...
Dodgers Depth Chart
Our full team depth charts are reserved for RotoWire subscribers.
Subscribe Now
Recent RotoWire Articles Featuring Phil Bickford See More
MLB: Postseason Cheat Sheet and Strategy
119 days ago
119 days ago
Todd Zola tackles the MLB Postseason Cheat Sheet for RotoWire and discusses his approach to postseason leagues this year.
Closer Encounters: Relief Market Primer
189 days ago
189 days ago
Ryan Rufe breaks down the relievers who could be on the move in the next few days as well as their potential destinations.
Closer Encounters: Closer Infirmary Adds Another
219 days ago
219 days ago
Ryan Rufe breaks down the latest closer news around the league, with one of the top closers of this generation landing on the injured list and another nearing a return.
Rounding Third: Friday Night Reactions
286 days ago
286 days ago
Wander Franco and Mookie Betts both went deep twice on Friday night, among the players catching Jeff Erickson's eye.
Playoff Primer: The Rankings
October 5, 2021
October 5, 2021
Todd Zola ranks players by position for fantasy playoff leagues. Chicago's Jose Abreu is tough to beat at first base.
Past Fantasy Outlooks
2022
2017
2016
Bickford is one of the many relievers we now see in baseball that takes two pitches, throws them with high effort and fills a niche in a club's bullpen. In Bickford's case, his job is to come in to face righties while slinging fastballs and sliders their way in short spurts. He worked fewer innings than games played, but picked up a handful of decisions in leverage situations with solid ratios. The repertoire pretty much limits him to a righty specialist insomuch as any reliever can be a specialist with the three-batter minimum rule these days. He has little fantasy relevance unless several dominoes in front of him fall.
At first glance, Bickford seemed like a steep price for the Giants to pay to acquire reliever Will Smith. But Bickford's recent performance, most notably at the 2016 Futures Game, left many observers unimpressed. Rather than showing the mid-90s fastball that intrigued scouts, Bickford has been sitting 88-92 with his fastball. And while his slider is devastating, he lacks a secondary pitch like a changeup he can use to challenge left-handed hitters. Bickford is only 21 years old and has plenty of time to develop and fix these flaws, but it's rare for teams to give up first-round talents like him without having an inkling that something is off. His control in particular was off in 2016; he walked five batters per nine innings after the Brewers acquired him. He'll have to figure that part of his game out before he can regain his top prospect status.
After being taken with the 18th pick in the 2015 MLB Draft, Bickford went to the Arizona League and posted a 2.01 ERA with 32 strikeouts in 22.1 innings. While it was a small sample, the 6-foot-5 righty exhibited the power and high-end strikeout ability that had scouts pegging him as a first-round talent. He possesses a plus fastball to go along with an average slider and changeup, but what makes him such an intriguing prospect is his combination of velocity with plus control. Looking ahead, Bickford will likely start the year in the lower levels, and is probably at least three years away from the big leagues. He should be a secondary target for those in dynasty leagues, as he does not have quite as high of a ceiling as some of the arms that went ahead of him last year's draft.
More Fantasy News