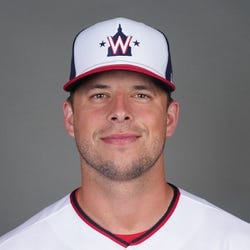 2022 Stats
AVG
.176
HR
5
RBI
10
R
14
SB
0
2023 Projections
AVG
HR
RBI
R
SB
Unlock Our Projections
2023 Fantasy Outlook
A third-round pick by Toronto in 2017, Adams was flipped to Washington in 2021 in exchange for lefty reliever Brad Hand. While Adams made the Opening Day roster for the Nationals, he was sent down for close to two months in the middle of the season and ended up totaling 155 plate appearances as getting Keibert Ruiz playing time was understandably the higher priority for the organization. Adams strikes out too much, but he can light up the radar gun with impressive exit velocity when he runs into one. He projects to open the year as the clear-cut No. 2 behind Ruiz. Read Past Outlooks
read more
RANKS
#601
ADP
League Majors
Bats R
Throws R
40 Man Yes
Height 6'4"
Weight 225
DOB 6/26/1996
Born Encinitas, CA
College San Diego
Drafted 3rd Rd 2017 TOR
$Traded to the Nationals in July of 2021.