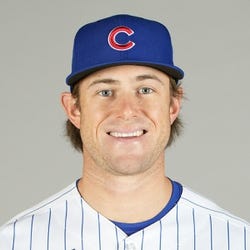 2022 Stats
W-L
4-7
ERA
4.22
WHIP
1.69
K
69
SV
9
2023 Projections
W-L
ERA
WHIP
K
SV
Unlock Our Projections
2023 Fantasy Outlook
There are some positive attributes, such as a 9.9 K/9 and 0.7 HR/9 for his career, but Wick's days of getting a decent chunk of save chances for the Cubs are probably over after he managed a 1.69 WHIP that was the 2nd-worst among qualified relievers last season. His 1.47 career WHIP doesn't exactly scream "put me in coach, I'm ready to pitch the 9th inning," either. That's not to say Wick won't get the occasional save chance moving forward, but double digit saves are highly unlikely, even after finishing second on the team in the saves category in each of the past three seasons. After finding success with his cutter in the past, Wick gave up a .568 BA and .811 SLG on the pitch last year. His mid-90's fastball can only take him so far, so a tweak of his secondary offerings could potentially yield better results. Read Past Outlooks
read more
RANKS
#590
ADP
#

* Exit Velocity, Barrels/BBE %, Balls Hit 95+ MPH %, and Spin Rate are benchmarked against 2019 data (min 30 IP). See here for more exit velocity/barrels stats plus an explanation of current limitations with that data set.
K/BB
2.38
K/9
9.7
BB/9
4.1
HR/9
1.3
Fastball
94.9 mph
ERA
4.22
WHIP
1.69
BABIP
.386
GB/FB
1.55
Left On Base
74.4%
Exit Velocity
82.1 mph
Barrels/BBE
4.6%
Spin Rate
2307 rpm
Balls Hit 95+ MPH
21.3%
Swinging Strike
10.3%
Advanced Pitching Stats
Loading Advanced Pitching Stats...
Defensive Stats
Loading MLB Defensive Stats...
Stats Vs Today's Lineup
Want more matchup stats?
View Rowan Wick vs. Batter Stats
Loading Matchup Stats...
Cubs Depth Chart
Our full team depth charts are reserved for RotoWire subscribers.
Subscribe Now
Recent RotoWire Articles Featuring Rowan Wick See More
Closer Encounters: 2022 Saves in Review, Part 2
110 days ago
110 days ago
Ryan Rufe recaps the saves landscape in this year's NFBC Main Event and shares his own hits and misses from this past season.
Closer Encounters: 2022 Saves in Review, Part 1
116 days ago
116 days ago
Ryan Rufe recaps this past season's saves landscape. Just how many teams preferred closer committees over the conventional approach?
Mound Musings: Life, the Universe, and Everything
143 days ago
143 days ago
Brad Johnson checks in with his thoughts on the new MLB rules, the importance of innings pitched, and a handful of pitchers making waves in recent weeks.
Todd's Takes: Popping Out and Popping Off
148 days ago
148 days ago
Todd Zola discusses foul territory and the new MLB rules before picking out the most fantasy-relevant bits of info from Friday's MLB slate.
Past Fantasy Outlooks
2022
2021
2020
2017
Wick was in the Cubs' mix for saves for the third consecutive season, finishing 2021 with a career-high five saves despite not making his season debut until mid-August after dealing with a lengthy oblique strain. The 29-year-old struck out 29 in 23 innings for Chicago, which represented a two percent increase in his strikeout rate (29%). He also kept the ball inside the park, which continues to be a strength since he's allowed just three home runs over 82 career innings. Wick was especially tough on left-handed hitters, holding them to a .182 BAA after a .290 split in 2020. However, one blemish on his season was a career-worst 14% walk rate. If his command issues persist, it may prevent Wick from emerging as a full-time closer in the future. While there's a chance he's the Cubs primary closer to open 2022, he's probably a safer bet to earn single-digit saves in a complimentary role.
Wick was having a nice season and was in the mix for saves before an oblique injury in September brought his 2020 campaign to an abrupt halt. Prior to the injury, the righty amassed 20 strikeouts and four saves in 19 appearances (17.1 innings), and he posted a 3.12 ERA and 1.38 WHIP. That came on the heels of a strong 2019 in which he fanned 35 batters in 33.1 innings while recording a 2.43 ERA and 1.14 WHIP. Wick has found success with a fastball that consistently sits above 95 mph and a hard-breaking curveball. The strong two-year run puts the 28-year-old squarely in the Chicago closer conversation heading into 2021, and he could end up as the top option. Jeremy Jeffress led the Cubs with eight saves in 2020, but he's a free agent, and Craig Kimbrel has been up and down since coming to Chicago. Wick has been a decent fantasy asset, but he could reach new heights if he takes on more save chances.
Wick struck out 79 batters in 68.1 innings of work between Triple-A Iowa and Chicago last season, allowing 47 hits, only three of which left the yard. The converted catcher continues to transition to the other side of the battery, and took a step forward by retooling his curveball with the help of pitching coach Tommy Hottovy. It was Hottovy who suggested Wick start throwing a spike-curve to get more spin on the pitch, and tunneling that with his high-and-hard fastball made him very tough on righties, who had a .212 wOBA against him last year (.285 vs LHB). The walk rate would need to come down for him to have a safer spot in the late innings, but his current stuff at least earns him the chance to hang around in case something happens with Craig Kimbrel. He has the stuff to close, but the Cubs have an expensive roadblock in front of him.
Once a 20-homer hitter in the minor leagues, Wick switched to pitching in 2016 and had some success. He finished the season with a 2.64 ERA and 1.13 WHIP in 44.1 innings pitched between High-A and Double-A. His numbers with High-A Peoria were dominant, as he struck out 13.5 batters per nine and walked just 2.2 batters per nine en route to a 1.09 ERA and 0.89 WHIP. However, with his promotion to Double-A Springfield, where he pitched 19.2 innings, his walk rate ballooned to 6.4 BB/9 and his strikeout rate dropped to 9.2 K/9. He finished his time in Springfield with a 4.12 ERA and 1.42 WHIP. His loss of control with the move up is concerning, but Wick's first season as a pitcher can be regarded as a relative success. The Cardinals apparently thought so too, as they moved to protect him from the Rule 5 draft and added him to the 40-man roster in November. The 24-year-old will presumably begin the 2017 season back in Springfield.
More Fantasy News