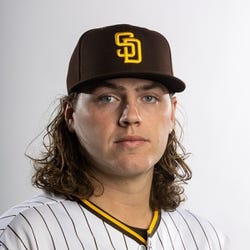 2022 Stats
W-L
0-0
ERA
9.82
WHIP
2.73
K
3
SV
0
2023 Projections
W-L
ERA
WHIP
K
SV
Unlock Our Projections
2023 Fantasy Outlook
Weathers had his day in the sun as a 20-year-old in 2020 when he jumped from High-A to the majors to make his first big-league appearance against the Dodgers in Game 1 of the NLDS. He opened the following season on the big-league roster and fared well for a few months but fell apart late in the campaign and hasn't looked good since. The right-hander spent most of last season in Triple-A, posting a 6.73 ERA and 1.79 WHIP over 123 innings. His 6.46 FIP suggests that there wasn't a bright spot below the surface of his struggles, which isn't surprising given that his strikeout rate (15.6%) was far too close to his walk rate (10.1%). Both numbers were easily his worst as a pro, as was his 2.3 HR/9. Figuring out the causes for such regression will be key to Weathers getting his career back on track, with perhaps the best thing going for him being the fact that he's still just 22. A turnaround could have Weathers making an impact with the big-league club in 2023, but there's no doubt that his star is much dimmer than it was a few seasons ago. Read Past Outlooks
read more
League AAA
Bats R
Throws L
40 Man Yes
Height 6'1"
Weight 200
DOB 12/17/1999
Born Columbia, TN
College None
Drafted 1st Rd 2018 SD
$Signed a $5.23 million contract with the Padres in July of 2018.

* Exit Velocity, Barrels/BBE %, Balls Hit 95+ MPH %, and Spin Rate are benchmarked against 2019 data (min 120 IP). See here for more exit velocity/barrels stats plus an explanation of current limitations with that data set.
K/BB
0.75
K/9
7.4
BB/9
9.8
HR/9
0.0
Fastball
93.6 mph
ERA
9.82
WHIP
2.73
BABIP
.450
GB/FB
1.75
Left On Base
60.0%
Swinging Strike
12.4%
Prospect Rankings History
Advanced Pitching Stats
Loading Advanced Pitching Stats...
Defensive Stats
Loading MLB Defensive Stats...
Stats Vs Today's Lineup
Want more matchup stats?
View Ryan Weathers vs. Batter Stats
Loading Matchup Stats...
Padres Depth Chart
Our full team depth charts are reserved for RotoWire subscribers.
Subscribe Now
Recent RotoWire Articles Featuring Ryan Weathers See More
FanDuel MLB: Wednesday Targets
228 days ago
228 days ago
Chris Morgan looks over Wednesday's slate as Jack Flaherty makes his return to the mound with a soft matchup against the Pirates.
Yahoo DFS Baseball: Wednesday Picks
228 days ago
228 days ago
Mike Barner recommends checking out a Blue Jays stack Wednesday against the Orioles.
Spring Training Job Battles: National League
302 days ago
302 days ago
Erik Halterman surveys the NL for the latest job battles, including the Dodgers where Tony Gonsolin is fighting for a rotation spot.
MLB: Jeff Zimmerman on Starter/Relievers Part 2
November 12, 2021
November 12, 2021
Jeff Zimmerman circles back and examines eight more pitchers who split time between starting and relieving in 2021. Are any of them worth a roster spot in mixed leagues in 2022?
MLB: Jeff Zimmerman on Starter/Reliever Splits
October 29, 2021
October 29, 2021
Jeff Zimmerman discusses why it's important to look at starter/reliever splits and identifies the 65 players who started five games and relieved in five others in 2021.
Past Fantasy Outlooks
2021
2020
2019
Weathers received his first opportunity to take the big stage in 2020, making his MLB debut at a crucial time for the Padres. He hurled 1.1 scoreless innings in Game 1 of the NLDS against the Dodgers, walking two in the process. The 21-year-old put together a decent 2019 campaign at Low-A in 2019, finishing with a 3.84 ERA and 1.24 WHIP to go along with a 90:18 K:BB across 96 frames. When the southpaw is really locked in, he's able to get hitters out on the corners, or by grounding out weakly, which explains his 45.3 GB% and 22.8 K% at Low-A. Weathers' conditioning remains a concern, however, as he sits at 6-foot-1 and 230 pounds as a young athlete. Expect him to begin 2021 as a part of the starting rotation for Double-A Amarillo.
Weathers logged a 1.82 ERA, 0.97 WHIP and 31:3 K:BB in 24.2 innings over five April starts in the Midwest League. Then he missed three weeks with arm fatigue and had a 4.54 ERA, 1.33 WHIP and 59:15 K:BB in 71.1 innings the rest of the way. When Weathers, the son of long-time big-league reliever David Weathers, is on, he attacks hitters with a low-90s fastball that he locates to both sides of the plate and sits hitters down with a plus changeup. However, his velocity wasn't there when he returned and it showed. Conditioning is probably his biggest objective going forward, as at 6-foot-1, 230 pounds, he is overweight for an ordinary Joe, let alone a 20-year-old professional athlete. If he takes his diet and conditioning seriously and his average slider improves slightly, he could be a very good mid-rotation starter.
When the Padres drafted Weathers No. 7 overall in last year's draft, some thought that he would have to settle for an under-slot signing bonus. Weathers ended up getting the full slot value -- $5.23 million. The son of longtime big leaguer David Weathers, Ryan totaled 18.1 innings between rookie ball and Low-A after being drafted. He has flashed plus with his fastball and curveball, and has shown an advanced feel for the changeup. It's an impressive repertoire for a 19-year-old lefty, and the pedigree and command are there, offering hope that he can max out. Chances are, Weathers will head back to A-ball and spend much of the season at the lower levels. If his development proceeds are expected, he will then spend much of 2020 at the upper levels before likely breaking in as a starter in 2021. If the Padres are competitive in 2020, perhaps they will have Weathers get his feet wet in a relief role late in the campaign.
More Fantasy News