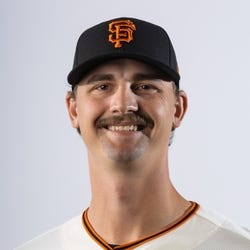 * Exit Velocity, Barrels/BBE %, Balls Hit 95+ MPH %, and Spin Rate are benchmarked against 2019 data (min 30 IP). See here for more exit velocity/barrels stats plus an explanation of current limitations with that data set.
K/BB
3.50
K/9
10.1
BB/9
2.9
HR/9
1.1
Fastball
93.9 mph
ERA
5.76
WHIP
1.64
BABIP
.414
GB/FB
4.18
Left On Base
59.8%
Exit Velocity
82.0 mph
Barrels/BBE
3.8%
Spin Rate
1954 rpm
Balls Hit 95+ MPH
27.1%
Swinging Strike
8.2%
Prospect Rankings History
View Complete Sean Hjelle Prospect Ranking History
Advanced Pitching Stats
Loading Advanced Pitching Stats...
Defensive Stats
Loading MLB Defensive Stats...
Stats Vs Today's Lineup
Want more matchup stats?
View Sean Hjelle vs. Batter Stats
Loading Matchup Stats...
Giants Depth Chart
Our full team depth charts are reserved for RotoWire subscribers.
Subscribe Now
Recent RotoWire Articles Featuring Sean Hjelle See More
Yahoo DFS Baseball: Monday Picks
120 days ago
120 days ago
Mike Barner sets up Monday’s Yahoo slate, turning to Mets slugger Pete Alonso against the Nationals.
Weekly Pitcher Rankings: And Then There Was One
129 days ago
129 days ago
Robbie Ray tops Todd Zola's weekly pitcher rankings thanks to a pair of home matchups against a pair of struggling opponents.
Weekly Pitcher Rankings: Cease Tops a Busy Week
136 days ago
136 days ago
Two-start pitchers fill eight of the top nine spots in Todd Zola's weekly pitcher rankings, but Jacob deGrom earns a spot near the top despite being scheduled for just one start.
MLB Picks Today: Expert MLB Bets for Saturday, September 17
136 days ago
136 days ago
Juan Carlos Blanco is targeting a pair of friendly matchups for a pair of strong starting pitchers for his Saturday MLB picks. Visit RotoWire for more MLB picks and betting analysis all season long.
Past Fantasy Outlooks
2021
2020
Hjelle likely would have been on track to make his major-league debut during a normal season, but he didn't appear in the big leagues during the abbreviated 2020 campaign. However, the 23-year-old could make his first appearance in the majors in 2021, especially if the full 162-game season is played. Hjelle doesn't have the velocity that one might expect from a pitcher with his 6-11 frame, but his downward motion limits meaningful contact. The right-hander struggled slightly over a limited sample with Double-A Richmond in 2019, posting a 6.04 ERA over 25.1 innings. However, he was much more effective over the full season, totaling a 3.32 ERA and 139:37 K:BB over 143.2 innings in 28 starts. Hjelle has displayed solid command while relying heavily on his knuckle-curve, and he he could find success in a variety of big-league roles, especially if he can improve his fastball velocity and movement on his slider.
Standing 6-feet-11, Hjelle has a good chance to join Jon Rauch as the tallest pitchers to appear in the majors. Hjelle spent last season at three levels, finishing at Double-A Richmond where he's likely to begin the 2020 campaign. Unlike most lanky hurlers, Hjelle possesses an uncanny ability to repeat his delivery. However, he doesn't generate the same velocity as most with his height, sitting low-90s. Most of Hjelle's effectiveness comes from the extreme downward plane he generates, helping the righty keep the ball in the yard. Most feel Hjelle projects as a back-end starter, but with his unusual frame, he's a wild card. Currently, his top pitch is a knuckle-curve, but if he can add a few ticks to his heater or more sweep to his slider, Hjelle could be a front-end guy. With pitching such a crapshoot, you could do worse than to throw a dart at Hjelle in dynasty formats.
More Fantasy News