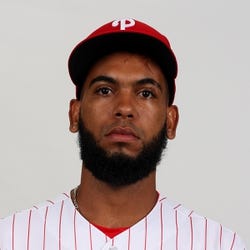 2022 Stats
W-L
6-5
ERA
3.00
WHIP
1.14
K
61
SV
9
2023 Projections
W-L
ERA
WHIP
K
SV
Unlock Our Projections
2023 Fantasy Outlook
Dominguez returned in 2022 after losing almost two full seasons to Tommy John surgery. After a strong spring, he made 54 appearances for the Phillies, totaling 51 innings with a 3.00 ERA (3.15 SIERA) and 1.14 WHIP. The 28-year-old was Philadelphia's highest leverage reliever, as evidenced by his team-leading 1.33 WPA and 1.67 gmLI. He earned six wins and finished second on the team with nine saves, all of which came after Corey Knebel was ousted as closer in mid-June. Dominguez averaged 98 mph on his heater and had a solid 89th percentile whiff rate, thanks to his slider. However, the contact he did allow was often hard with a bottom 5% rate of 45.5%. His poor 58% first-pitch strike percentage yielded a 10.6% walk rate that was also well below average. Since Phillies manager Rob Thomson has shown he's open to using a closer committee, don't count on Dominguez as your primary source of saves, but he makes a fine second or third contributor for the category. Read Past Outlooks
read more
RANKSFrom Preseason
#

* Exit Velocity, Barrels/BBE %, Balls Hit 95+ MPH %, and Spin Rate are benchmarked against 2019 data (min 30 IP). See here for more exit velocity/barrels stats plus an explanation of current limitations with that data set.
K/BB
2.77
K/9
10.8
BB/9
3.9
HR/9
0.7
Fastball
98.0 mph
ERA
3.00
WHIP
1.14
BABIP
.279
GB/FB
1.59
Left On Base
76.3%
Exit Velocity
82.2 mph
Barrels/BBE
4.5%
Spin Rate
2343 rpm
Balls Hit 95+ MPH
22.5%
Swinging Strike
14.9%
Prospect Rankings History
View Complete Seranthony Dominguez Prospect Ranking History
Advanced Pitching Stats
Loading Advanced Pitching Stats...
Defensive Stats
Loading MLB Defensive Stats...
Stats Vs Today's Lineup
Want more matchup stats?
View Seranthony Dominguez vs. Batter Stats
Loading Matchup Stats...
Phillies Depth Chart
Our full team depth charts are reserved for RotoWire subscribers.
Subscribe Now
Recent RotoWire Articles Featuring Seranthony Dominguez
The Z Files: OK, I'm SOLD
Yesterday
Yesterday
Todd Zola reconsiders his stance against adding holds as a roto category, and takes a look at the impact it would have on relievers like Devin Williams.
World Series Betting Preview: Phillies vs. Astros Picks and Predictions
38 days ago
38 days ago
Erik Halterman gives his betting preview for the 2022 World Series with the latest odds along with his best bets and props to target for the Fall Classic.
Closer Encounters: 2022 Saves in Review, Part 2
46 days ago
46 days ago
Ryan Rufe recaps the saves landscape in this year's NFBC Main Event and shares his own hits and misses from this past season.
Closer Encounters: 2022 Saves in Review, Part 1
52 days ago
52 days ago
Ryan Rufe recaps this past season's saves landscape. Just how many teams preferred closer committees over the conventional approach?
The Z Files: NFBC Holdem Rankings and Strategies
54 days ago
54 days ago
Todd Zola shares his gameplan and his rankings for NFBC Postseason Holdem contests.
Past Fantasy Outlooks
2021
2020
2019
2018
Sometimes when a player elects for alternatives to Tommy John surgery, as Dominguez did back in June of 2019, he's able to return just fine and winds up missing considerably less time than he otherwise would have. While that represents the upside of such an approach, Dominguez's story represents the downside. He was making good progress in his recovery throughout the end of 2019 and into spring training before suffering a setback in March. Then, the coronavirus pandemic struck, and he was stuck in his native Dominican Republic, unable to return stateside to have the surgery. He finally underwent the procedure in July, over a year after it was originally considered. Had he had the surgery when it first appeared necessary, he'd likely be ready to go by Opening Day of this season, but instead he likely won't be ready until the start of 2022, two and a half years after his most recent big-league pitch.
Dominguez's rapid rise in 2018 saw him save 16 major-league games in his first season above High-A and his first season as a reliever. His sophomore campaign was not the second act that fantasy owners would have hoped for. An elbow injury, serious enough to raise Tommy John speculation (though the procedure was ultimately deemed unnecessary), cut his season short in early June after just 24.2 innings. It's possible he was dealing with the effects of the injury prior to hitting the injured list, as his velocity was down early and his performance was down along with it. His ERA jumped from 2.95 to 4.01, while his strikeout rate fell from 32.0% to 26.4%. Dominguez did at least resume throwing late in the year but didn't return to game action. At his best, he's proved capable of a closer role, but his track record is short and the injury risk can't be ignored.
Dominguez entered the year as a starter with zero appearances above High-A. He finished it with 16 saves and a 2.95 ERA in 58 major-league innings. It took the 23-year-old just 11 relief appearances in the high minors to convince the Phillies to call him up and just five more in the big leagues for manager Gabe Kapler to give him his first save chance. After beginning his MLB career with 12 scoreless outings (in which he allowed just three baserunners), he came back to Earth a bit, but his final line remained strong. Dominguez's fantasy value in 2019 will be determined in large part by Kapler's bullpen usage, which was unconventional in his first year at the helm. Nine different players recorded a save, and five different relievers were trusted for multiple saves in a row. Dominguez isn't quite in the Josh Hader tier of fantasy-relevant non-closers, but his 32% strikeout rate gives him some value in deeper leagues even if his save opportunities don't increase.
Dominguez always had great stuff, but command, control and durability had been issues for him as a starter, so the Phillies transitioned him to a relief role in 2018. As expected, he took to his new role quite well, rocketing from Double-A to the majors in a month's time. His fastball is parked at 99 mph and his slider makes hitters look foolish when he is on, so high-leverage work is a cinch. Hector Neris can miss bats, but his control comes and goes, so if Dominguez performs as expected, he could be a source of saves sooner than later.
More Fantasy News