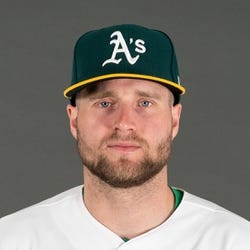 2022 Stats
AVG
.230
HR
25
RBI
73
R
55
SB
11
2023 Projections
AVG
HR
RBI
R
SB
Unlock Our Projections
2023 Fantasy Outlook
Brown has proven to be an incredible find as an 18th-round pick out of Lewis-Clark State College in 2015. Granted he's only been 12% better than league average by wRC+ in 294 MLB games to date, but compared to the rest of his A's teammates, he might as well be Barry Bonds. At age 29/30, Brown smacked 25 home runs -- no other Athletic hit more than 18 last season -- and finished with a barrel rate in the 90th percentile. The power comes with a good deal of swing-and-miss though Brown shaved his strikeout rate down to a more palatable 26.3% last season while adding a couple points to his walk rate. A lefty batter, Brown has struggled against same-side pitching in the majors to the tune of a .527 OPS and would likely find himself more strictly platooned on another team. While he swiped 11 bags last season, a repeat of double digits should be considered unlikely given his modest sprint speed. Read Past Outlooks
read more
RANKS
#

* Exit Velocity and Barrels/PA % are benchmarked against 2019 data (min 400 PA) and Hard Hit Rate is benchmarked against last season's data (min 400 PA). See here for more exit velocity/barrels stats plus an explanation of current limitations with that data set.
BB/K
0.35
BB Rate
9.2%
K Rate
26.3%
BABIP
.273
ISO
.214
AVG
.230
OBP
.305
SLG
.444
OPS
.749
wOBA
.326
Exit Velocity
89.2 mph
Hard Hit Rate
34.9%
Barrels/PA
8.3%
Expected BA
.251
Expected SLG
.454
Sprint Speed
24.8 ft/sec
Ground Ball %
35.9%
Line Drive %
20.1%
Fly Ball %
44.1%
Advanced Batting Stats
Loading Advanced Batting Stats...
Additional Stats
Games By Position
Defensive Stats
Loading Games Played by Position...
Loading MLB Defensive Stats...
Batted Ball Stats
Loading Batted Ball Stats...
Stats Vs Upcoming Pitchers
Want more matchup stats?
View Seth Brown vs. Pitcher Stats
Loading Matchup Stats...
Athletics Depth Chart
Our full team depth charts are reserved for RotoWire subscribers.
Subscribe Now
Recent RotoWire Articles Featuring Seth Brown
2023 Fantasy Baseball Rankings - Way Too Early Top 300 Draft Ranks
50 days ago
50 days ago
James Anderson provides a way too early top 300 rankings for those who have the itch to start drafting for 2023.
FanDuel MLB: Tuesday Targets
66 days ago
66 days ago
Chris Bennett checks out Tuesday's slate and thinks that Cedric Mullins and the Orioles make for an intriguing stack, weather permitting.
MLB: One Man's Trash... (Week 25)
67 days ago
67 days ago
Jeff Zimmerman analyzes a handful of players who have been dropped frequently, with an eye towards figuring out how interesting they'll be next season.
MLB FAAB Factor: Waiver Pickups of the Week
71 days ago
71 days ago
Jason Shebilske has plenty of recommendations for how to spend your remaining FAAB dollars, with Triston Casas looking worthy of a bid after overcoming a slow start.
Past Fantasy Outlooks
2022
2021
2020
Brown was finally given an extended look at the big-league level in 2021, logging 307 plate appearances while appearing at all three outfield field positions and first base. Outside of going deep at an impressive 14.1 AB/HR clip, the 29-year-old's output was largely underwhelming. He struck out 29% of the time while posting a disappointing 7.5% walk rate en route to slashing .214/.274/.280. There are some reasons to be optimistic about his offensive upside going forward, however. His .230 BABIP in 2021 strongly points to some positive regression in the batting average department going forward, and if he's able to continue to drive the ball out of the park at a high rate, it's not crazy to envision him becoming an above average offensive player. His struggles against southpaws will likely prevent him from capturing an everyday role, but Brown shouldn't have trouble finding consistent at-bats against right-hander's to begin 2022.
Brown made Oakland's Opening Day roster and then spent the rest of the abbreviated season shuttling between the major-league roster and the alternate training site. He only appeared in seven games, stepping up to the plate a total of five times. Brown has a pair of 30-homer season in the minors, but both occurred when he was a bit old for the level. Still, he has some pop from the left side and possesses the defensive flexibility the Athletics favor as Brown can play all three outfield spots plus first base. While he has a chance to make the 2021 club as a reserve, it's more likely Brown opens with Triple-A Las Vegas, where he will have to bide his time and await an opening at the big-league level.
Brown has now hit 30 or more home runs in two of the past three minor-league seasons. Before you get too excited; one season came as a 24-year-old in High-A, and one came last year in the PCL with the happy fun ball. The lefty hit 28 of his 37 homers against righties last year, and had a .999 OPS against righties compared to an .837 OPS vs lefties. He strikes out quite a bit, yet still has managed to hit for a decent average -- no worse than .283 at his last three stops. Last year's Triple-A numbers have to be taken with a grain of salt given the physics of the baseball and that Brown wasn't even a top-30 prospect in the Oakland organization heading into last season. He turns 28 this year, so his prospect status is behind him, but he looked good at the plate in his time at the big-league level. There's a lot working against him, but Brown may be able to make this work with a good RH platoon partner.
More Fantasy News