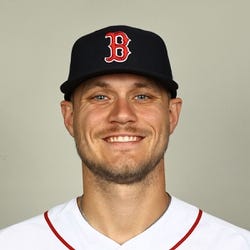 Out
Injury Back
Est. Return 2/1/2023
2022 Stats
W-L
5-4
ERA
3.15
WHIP
1.18
K
56
SV
8
2023 Projections
W-L
ERA
WHIP
K
SV
Unlock Our Projections
2023 Fantasy Outlook
Houck was a stabilizing presence for a Red Sox bullpen that desperately needed one in 2022, as his already flexible role expanded even further to include shorter high-leverage outings and save opportunities. With Boston struggling to hold leads in the late innings, the 26-year-old received his first save chance in June and recorded six within a two-week span. Houck tied for the team lead with eight saves, but his season ended prematurely due to a disc issue in his back that required surgery. He finished with 60 innings across 32 appearances (four starts) with similar outputs to 2021, though his K-rate dipped nearly eight percentage points, from 30.5% to 22.7%. Houck expects to be cleared for the start of spring training and will spend this offseason building up to be a starter, but the Red Sox informed him he may end up back in the bullpen once the 2023 season starts. Kenley Jansen's arrival in free agency renders Houck much less relevant unless he actually makes the rotation or Jansen gets injured. Read Past Outlooks
read more
RANKS
#376
ADP
#

* Exit Velocity, Barrels/BBE %, Balls Hit 95+ MPH %, and Spin Rate are benchmarked against 2019 data (min 30 IP). See here for more exit velocity/barrels stats plus an explanation of current limitations with that data set.
K/BB
2.55
K/9
8.4
BB/9
3.3
HR/9
0.5
Fastball
94.9 mph
ERA
3.15
WHIP
1.18
BABIP
.289
GB/FB
2.31
Left On Base
73.4%
Exit Velocity
83.5 mph
Barrels/BBE
3.6%
Spin Rate
2230 rpm
Balls Hit 95+ MPH
30.1%
Swinging Strike
13.1%
Prospect Rankings History
View Complete Tanner Houck Prospect Ranking History
Advanced Pitching Stats
Loading Advanced Pitching Stats...
Defensive Stats
Loading MLB Defensive Stats...
Stats Vs Today's Lineup
Want more matchup stats?
View Tanner Houck vs. Batter Stats
Loading Matchup Stats...
Red Sox Depth Chart
Our full team depth charts are reserved for RotoWire subscribers.
Subscribe Now
Recent RotoWire Articles Featuring Tanner Houck See More
Todd's Takes: Reviewing the Moves and ADP
50 days ago
50 days ago
Todd Zola breaks down the early rush of offseason moves. Does Jacob deGrom's deal with the Rangers imply anything about his health?
The Z Files: OK, I'm SOLD
58 days ago
58 days ago
Todd Zola reconsiders his stance against adding holds as a roto category, and takes a look at the impact it would have on relievers like Devin Williams.
2023 Fantasy Baseball Rankings - Way Too Early Top 300 Draft Ranks
101 days ago
101 days ago
James Anderson provides a way too early top 300 rankings for those who have the itch to start drafting for 2023.
Closer Encounters: 2022 Saves in Review, Part 2
103 days ago
103 days ago
Ryan Rufe recaps the saves landscape in this year's NFBC Main Event and shares his own hits and misses from this past season.
Closer Encounters: 2022 Saves in Review, Part 1
109 days ago
109 days ago
Ryan Rufe recaps this past season's saves landscape. Just how many teams preferred closer committees over the conventional approach?
Past Fantasy Outlooks
2022
2021
2020
With Eduardo Rodriguez dealing with a sore arm to open the season, Houck broke camp with the Red Sox but was sent to the alternate site once Rodriguez was ready in mid-April. After dealing with a sore flexor muscle until mid-June, he spent the second half shuttling between Triple-A Worcester and the big club. While with the Red Sox, Houck made 18 appearances, starting five contests. Featuring an arsenal compared to a right-handed Chris Sale, Houck posted an impressive 3.52 ERA and 1.13 WHIP, buoyed by a 23.2% K-BB% which would have placed eighth among qualified starters, but he only tallied 69 frames, about 100 fewer than needed to make the leaderboard. If Houck can develop another secondary to complement his 94-mph fastball, wipeout slider and occasional splitter, he has ace potential. He should get a chance to prove himself as a member of Boston's starting rotation to begin the regular season.
Few prospects covered more developmental ground at their team's alternate training site than Houck, who cleaned up his crossfire delivery to the point that he may be able to stick in the rotation. His gains were rewarded with a three-start run to close the year, during which he dominated the Braves, Yankees and Marlins. He utilizes a four-seamer and a sinking two-seamer, both of which sit in the low-90s and touch 95 mph. Houck threw his wipeout mid-80s slider 94 times (35% usage), recording 10 strikeouts with the pitch while surrendering zero hits. Houck's fastball/slider combo is effective enough that he might be able to get by without a viable third pitch, but the development of his splitter would go a long way toward him sticking in Boston's rotation for years to come. He should get a pretty long leash in 2021, given the Red Sox's lack of rotation depth.
The Red Sox tried to teach Houck a four-seam fastball in 2018, but it was flat, straight and ineffective, so they had him go back to using the two-seamer primarily last season. It was that pitch -- regarded as one of the best two-seam fastballs in the 2017 draft class -- that led Boston to take Houck 24th overall that year. With the change back to a more familiar approach, Houck was able to advance to Triple-A, and he enjoyed a good deal of success out of the bullpen with Pawtucket, holding opponents to a .202 average in his 25 innings with the top affiliate. He allowed just a 12.5% line-drive rate at Triple-A. His walk rate spiked with the jump in levels and the strikeout rates have been modest so far in his professional career, but Houck is now a step away and could theoretically rise fast up the ranks in Boston's largely unsettled bullpen.
More Fantasy News