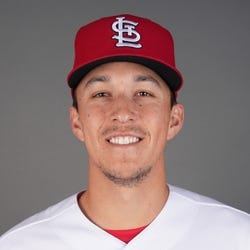 2022 Stats
AVG
.265
HR
13
RBI
57
R
95
SB
32
2023 Projections
AVG
HR
RBI
R
SB
Unlock Our Projections
2023 Fantasy Outlook
A graduate from Stanford with a degree in math and computational science, Edman is a smart baseball player and you can see it in certain stats like his stolen-base success rate (career 79-for-92). He picks his spots and maximizes his natural talent. While Edman doesn't draw a ton of walks, he puts the ball in play and can hit for decent average and a bit of pop from both sides of the plate. It's worth noting that of Edman's 32 steals last season, 21 came when he batted out of the leadoff spot. Conversely, he only stole two bags in 31 games batting at the bottom of the order, so the Cardinals' lineups will be worth watching as we push closer to Opening Day. Regardless of where he slots in, Edman will be in the staring nine close to every day thanks to his defensive prowess. He is eligible at both middle-infield positions entering 2023. Read Past Outlooks
read more
RANKS
#72
ADP
#

* Exit Velocity and Barrels/PA % are benchmarked against 2019 data (min 400 PA) and Hard Hit Rate is benchmarked against last season's data (min 400 PA). See here for more exit velocity/barrels stats plus an explanation of current limitations with that data set.
BB/K
0.41
BB Rate
7.3%
K Rate
17.6%
BABIP
.308
ISO
.135
AVG
.265
OBP
.324
SLG
.400
OPS
.725
wOBA
.320
Exit Velocity
88.6 mph
Hard Hit Rate
29.5%
Barrels/PA
4.6%
Expected BA
.258
Expected SLG
.380
Sprint Speed
26.0 ft/sec
Ground Ball %
49.5%
Line Drive %
19.6%
Fly Ball %
31.0%
Prospect Rankings History
View Complete Tommy Edman Prospect Ranking History
Advanced Batting Stats
Loading Advanced Batting Stats...
Additional Stats
Games By Position
Defensive Stats
Loading Games Played by Position...
Loading MLB Defensive Stats...
Batted Ball Stats
Loading Batted Ball Stats...
Stats Vs Upcoming Pitchers
Want more matchup stats?
View Tommy Edman vs. Pitcher Stats
Loading Matchup Stats...
Cardinals Depth Chart
Our full team depth charts are reserved for RotoWire subscribers.
Subscribe Now
Recent RotoWire Articles Featuring Tommy Edman See More
MLB Roundtable Rankings: 2023 Fantasy Baseball Top 300
4 days ago
4 days ago
From Trea Turner to Spencer Torkelson, RotoWire's Roundtable Rankings crew offers their combined top 300 fantasy baseball rankings.
Rookie Hitter Tiers 1.0
12 days ago
12 days ago
James Anderson releases Vol. 1 of his rookie hitter tiers for 2023 value only, in which Orioles infielder Gunnar Henderson is in a tier of two at the top.
Collette Calls: 2023 AL East Bold Predictions
19 days ago
19 days ago
Jason Collette shares his bravest takes on 10 AL East players, including arguments for buying Brandon Lowe and passing on Carlos Rodon.
2023 Fantasy Baseball Rankings - Way Too Early Top 300 Draft Ranks
108 days ago
108 days ago
James Anderson provides a way too early top 300 rankings for those who have the itch to start drafting for 2023.
Collette Calls: Buckle Up
121 days ago
121 days ago
Jason Collette is excited for the increase in steals which the new rules should bring next season. Which hitters and pitchers will be affected the most?
Past Fantasy Outlooks
2022
2021
2020
After Edman's rookie season, there was hope he'd develop into a multi-eligibility player with power and speed. With apologies to Meatloaf, two out of three ain't bad. It's apparent Edman's .500 slugging percentage in 2019 was a mirage, fueled by a HR mark a few more than expected. That said, according to Statcast, Edman's 11 long balls last season were a couple lighter than expected. After vanishing in 2020, Edman's stolen bases returned as his 30 SB tied for fourth most in MLB. Edman's 13.7 K% was 13th lowest among qualified hitters. Edman's contact rate and steals, along with dual position eligibility (2B/OF) provide his fantasy allure. Despite a low BB%, Edman has hit first or second in 230 of the 306 games he's played. His batted-balls skills don't support a high BABIP, but 92nd percentile sprint speed should keep it around league average. There's ample support to safely target Edman for steals.
Depending on how your league handles positional eligibility for 2021, Edman could be eligible at up to four positions on draft day as he reached eight appearances at second base, shortstop, third base and outfield. Edman's offensive numbers went in the wrong direction in 2020 after he burst onto the scene with a 123 wRC+, 11 homers and 15 steals in 349 PA in 2019. The strikeout rate shot up to 21.1% and the batted-ball numbers leave a lot to be desired, with his exit velocity and barrel rate both ranking in the bottom 15% of the league. His sprint speed ranked in the 95th percentile, but Edman was caught four times against only two successful steal attempts. That was a big surprise after Edman went 15-for-16 on the basepaths in 2019. Edman is smart -- he has a degree from Stanford in mathematical and computational science -- and we expect he will be able to squeeze a lot out of his natural baseball talent.
After spending the first two months of the season with Triple-A Memphis, Edman earned a promotion in June and never looked back, finishing with a team-best 123 wRC+ across 92 games while playing third base (41 starts), second base (23) and the outfield (11). The rookie also led the Cardinals in average (.304) and slugging percentage (.500), while he ranked second in OBP (.350) despite a poor 4.6 BB%. While there are reasons to believe Edman's high average is sustainable (.292 xBA per Statcast), underlying numbers -- 4.1% Barrels/PA and .425 xSLG per Statcast -- suggest he may not be able to keep up the same home run pace (11 in 349 plate appearances) in 2020. Either way, Edman's value is buoyed by his impressive speed, as he went 24-for-25 in stolen base chances between Memphis and St. Louis. He started all nine playoff games and, even without a set position, should see plenty of opportunities in 2020.
More Fantasy News