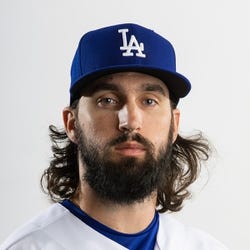 2022 Stats
W-L
16-1
ERA
2.14
WHIP
0.87
K
119
SV
0
2023 Projections
W-L
ERA
WHIP
K
SV
Unlock Our Projections
2023 Fantasy Outlook
Gonsolin was in contention for the NL Cy Young Award with a 16-1 record, 2.10 ERA, 0.86 WHIP and 116:35 K:BB across 128.1 innings before he suffered a forearm strain in late August, and he only returned from the injured list during the final week of the regular season. The right-hander worked as a swingman for the Dodgers over the previous three years, but he was a pivotal rotation piece in 2022, especially given the pitching staff's other injury woes. The right-hander had a 23.9 percent strikeout rate and 7.0 percent walk rate, and opposing batters hit only .172 with a 0.76 HR/9. Gonsolin had a 3.70 xFIP and may have a tough time replicating the dominant campaign, though he'll continue to benefit from making half his starts and Dodgers Stadium and having a strong defense behind him. Read Past Outlooks
read more
RANKSFrom Preseason
#

* Exit Velocity, Barrels/BBE %, Balls Hit 95+ MPH %, and Spin Rate are benchmarked against 2019 data (min 120 IP). See here for more exit velocity/barrels stats plus an explanation of current limitations with that data set.
K/BB
3.40
K/9
8.2
BB/9
2.4
HR/9
0.8
Fastball
93.2 mph
ERA
2.14
WHIP
0.87
BABIP
.215
GB/FB
1.31
Left On Base
83.2%
Exit Velocity
81.3 mph
Barrels/BBE
2.0%
Spin Rate
2138 rpm
Balls Hit 95+ MPH
20.5%
Swinging Strike
12.5%
Prospect Rankings History
View Complete Tony Gonsolin Prospect Ranking History
Advanced Pitching Stats
Loading Advanced Pitching Stats...
Defensive Stats
Loading MLB Defensive Stats...
Stats Vs Today's Lineup
Want more matchup stats?
View Tony Gonsolin vs. Batter Stats
Loading Matchup Stats...
Dodgers Depth Chart
Our full team depth charts are reserved for RotoWire subscribers.
Subscribe Now
Recent RotoWire Articles Featuring Tony Gonsolin
2023 Fantasy Baseball Rankings - Way Too Early Top 300 Draft Ranks
44 days ago
44 days ago
James Anderson provides a way too early top 300 rankings for those who have the itch to start drafting for 2023.
FanDuel MLB: Friday Division Series Targets
50 days ago
50 days ago
Chris Bennett is predicting a big game for Atlanta's bats against Aaron Nola, a pitcher they put up runs against multiple times in the regular season.
MLB Playoff Bets Today: Expert MLB Picks and Props for Friday, October 14
50 days ago
50 days ago
Michael Rathburn breaks down the bets and player props he's targeting for Friday's loaded slate of MLB Playoffs action.
DraftKings MLB: Friday Breakdown
50 days ago
50 days ago
Nestor Cortez has 1.95 ERA at home and a 2.07 ERA over his last 12 starts, plus the Guardians are the worst team offensively of the six playing Friday, so if there is a "good" matchup available, it's this one.
MLB Playoff Picks: MLB Division Series Betting Preview
54 days ago
54 days ago
Erik Halterman gives his betting breakdown for the Divisional Series round of the MLB playoffs with odds and best bets from each matchup.
Past Fantasy Outlooks
2022
2021
2020
Gonsolin only pitched half of the season between two IL stints with an inflamed shoulder. He wasn't 100% healthy even when pitching as evidenced by his 14.2 BB% and his fastball losing 1.3 mph. The Dodgers didn't let him go deep into games. In 13 starts, he was only allowed to throw five or more innings four times. Additionally, he only faced six batters a third time through. He should be able to navigate a lineup a third time with an acceptable fastball and two great breaking pitches -- a slider (20.7 SwStr%) and splitter (19.1 SwStr%). The spin rates on his pitches took a major hit after the foreign substance ban enforcement, with his splitter losing over 500 rpm from 2020 to July of last year. Some or most of the decline could have been injury related. It's impossible to say.
Gonsolin missed the early portion of summer camp, so he opened the season continuing to throw at the alternate site. He was shuttled back and forth to the active roster most of August, making three scoreless starts. The righty was recalled for good in late August, making six more appearances (five starts). His 22.2 K-BB% was impressive, though a 3.80 xFIP and 3.68 SIERA indicate Gonsolin's 2.31 ERA was artificially low. A .250 BABIP and 4.0% HR/FB certainly helped. Gonsolin deploys a four-pitch mix, using a fastball averaging 95 mph about half the time and a show-me curveball. A slider against righties and a splitter against lefties fueled his 26.1 K%. Gonsolin's skills are commensurate with a top-50 starter. It's not a lock he will get the volume in the Dodgers' stacked rotation, but this is a fantasy-worthy arm. Try to find a spot for him on your staff.
Gonsolin debuted in late June and wound up spending most of the second half in the majors. In six starts and five relief appearances, he posted a 2.93 ERA, though his underlying numbers weren't particularly impressive, as he finished with a 22.7% strikeout rate and a 9.2% walk rate. With a fastball that's touched triple digits in the past (though it averaged only 93.5 mph last season) and a strikeout rate of 28.7% over his last three seasons in the minors, there's certainly room for growth for Gonsolin. Whether that growth occurs in the rotation or the bullpen remains to be seen. He threw four pitches at least 10% of the time in 2019, but only his split-finger was graded by scouts as a strong secondary weapon. The Dodgers develop pitchers well, but they also have a large number of good ones already, so Gonsolin's fantasy value this season will depend in large part on his role.
More Fantasy News