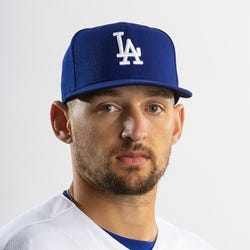 2022 Stats
AVG
.256
HR
13
RBI
41
R
36
SB
4
2023 Projections
AVG
HR
RBI
R
SB
Unlock Our Projections
2023 Fantasy Outlook
Thompson looked to be headed toward a forgettable 2022 campaign when he went 1-for-14 in an early-season stint with the Padres and was consequently designated for assignment. He latched on with the Tigers in May but didn't see any additional MLB action until the Dodgers traded for him in June. The acquisition proved to be fruitful for Los Angeles, as Thompson clubbed 13 homers, slashed .268/.364/.537 and posted a 153 wRC+ over 75 regular-season games with the club. The Dodgers were impressed enough with Thompson to include him in the starting lineup for all four of their playoff games, though he went just 2-for-13 with six strikeouts and three walks. Despite his breakthrough half-season, it's unlikely that Thompson is lined up to become a true late-career Cinderella story given his flaws at the plate -- most glaringly, he registered a 36.5 percent strikeout rate and hit just .174 against southpaws on the campaign. There's a good chance he'll remain with Los Angeles in 2023, but given his lack of sustained MLB success, Thompson's most likely fit is as a fourth outfielder and occasional DH. Read Past Outlooks
read more
RANKS
#470
ADP
League Majors
Bats R
Throws R
40 Man Yes
Height 6'3"
Weight 220
DOB 3/15/1991
Born Los Angeles, CA
College None
Drafted 2nd Rd 2009 CWS
$Signed a one-year, $1.45 million contract with the Dodgers in January of 2023.