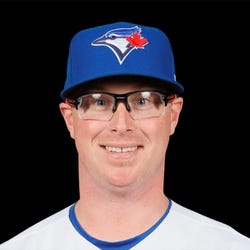 * Exit Velocity, Barrels/BBE %, Balls Hit 95+ MPH %, and Spin Rate are benchmarked against 2019 data (min 30 IP). See here for more exit velocity/barrels stats plus an explanation of current limitations with that data set.
K/BB
2.18
K/9
7.2
BB/9
3.3
HR/9
1.4
Fastball
93.8 mph
ERA
4.11
WHIP
1.24
BABIP
.262
GB/FB
0.96
Left On Base
76.3%
Exit Velocity
83.8 mph
Barrels/BBE
4.7%
Spin Rate
2699 rpm
Balls Hit 95+ MPH
31.1%
Swinging Strike
8.9%
Prospect Rankings History
View Complete Trent Thornton Prospect Ranking History
Advanced Pitching Stats
Loading Advanced Pitching Stats...
Defensive Stats
Loading MLB Defensive Stats...
Stats Vs Today's Lineup
Want more matchup stats?
View Trent Thornton vs. Batter Stats
Loading Matchup Stats...
Blue Jays Depth Chart
Our full team depth charts are reserved for RotoWire subscribers.
Subscribe Now
Recent RotoWire Articles Featuring Trent Thornton See More
MLB: Postseason Cheat Sheet and Strategy
116 days ago
116 days ago
Todd Zola tackles the MLB Postseason Cheat Sheet for RotoWire and discusses his approach to postseason leagues this year.
The Z Files: Sometimes, Crime Does Pay
255 days ago
255 days ago
Todd Zola examines the league-wide stolen-base environment and identifies some speedy players who could be valuable as streaming options, including Andres Gimenez.
MLB Betting: Tuesday Best Bets
April 27, 2021
April 27, 2021
Joe Sheehan discusses how luck plays a role, for better or for worse, in the gambling space before offering a trio of bets for Tuesday's MLB slate.
DraftKings MLB: Wednesday Breakdown
April 21, 2021
April 21, 2021
Mike Barner dives into a seven-game DraftKings offering Wednesday, turning to a Red Sox stack against the Blue Jays.
Past Fantasy Outlooks
2021
2020
Thornton was feared to have required Tommy John surgery, but he only needed surgery to remove loose bodies in his right elbow at the beginning of September. As a result, he should be ready for the start of the 2021 campaign. The right-hander battled elbow issues over most of the season in 2020, and he only made three starts as a result. Thornton's production was skewed by a limited sample, but he still improved to a 2.66 FIP, although his 5.22 SIERA left something to be desired. He showed promise during his rookie season in 2019, but it's not yet clear how he'll perform after surgery. Thornton has a five-pitch arsenal, but he has a middling 92.2 mph average fastball velocity, and his strikeout rate hasn't jumped off the page. The 27-year-old demonstrated some effectiveness over his first two years in the majors, but he hasn't done enough to warrant a roster spot in most fantasy leagues to begin 2021.
Thornton unexpectedly emerged as Toronto's most reliable starter in his rookie campaign, tying for the team lead with six wins while pacing the squad in starts (29), innings (154.1) and strikeouts (149). Although his 4.59 FIP was far from spectacular, he finished the season on a positive note, registering a 2.19 ERA over 24.2 innings in September. Thornton doesn't throw exceptionally hard and registered a modest 22.0 K% last season, but he ranks as one of the baseball's top pitchers at generating a high spin rate, particularly on his slider and curveball. The right-hander probably won't evolve into a true staff ace, but he could grow into a solid middle-of-the-rotation pitcher if he can improve his walk rate (8.9%) and do a better job of limiting home runs (1.4 HR/9). Thornton is likely to open 2020 in Toronto's starting rotation, but he hasn't yet earned a roster spot in most fantasy leagues.
More Fantasy News