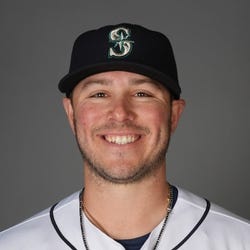 2022 Stats
AVG
.274
HR
20
RBI
83
R
65
SB
0
2023 Projections
AVG
HR
RBI
R
SB
Unlock Our Projections
2023 Fantasy Outlook
France may not sport the typical corner infield skill set, but it plays and can be a fantasy asset when used in the proper lineup build. His primary skill is an elite contact rate as his average exit velocity is 24th percentile flanked with a 29th percentile hard hit rate. France's fly ball exit velocity is a little higher, allowing him to maintain a slightly above average HR/FB. Put together, France has registered a wRC+ of 133, 130 and 127 over the past three seasons. His job as the Mariners' every day first baseman is secure, and manager Scott Servais likes to hit him in a prominent lineup spot. France's run production should benefit from an improving Seattle lineup. It hurts a bit that France no longer has second base eligibility, but France can provide batting stability with enough power to merit mixed league corner infield consideration. Read Past Outlooks
read more
RANKS
#172
ADP
#

* Exit Velocity and Barrels/PA % are benchmarked against 2019 data (min 400 PA) and Hard Hit Rate is benchmarked against last season's data (min 400 PA). See here for more exit velocity/barrels stats plus an explanation of current limitations with that data set.
BB/K
0.37
BB Rate
5.7%
K Rate
15.4%
BABIP
.296
ISO
.162
AVG
.274
OBP
.338
SLG
.436
OPS
.774
wOBA
.341
Exit Velocity
87.6 mph
Hard Hit Rate
30.5%
Barrels/PA
4.1%
Expected BA
.262
Expected SLG
.398
Sprint Speed
20.3 ft/sec
Ground Ball %
47.8%
Line Drive %
21.4%
Fly Ball %
30.7%
Prospect Rankings History
View Complete Ty France Prospect Ranking History
Advanced Batting Stats
Loading Advanced Batting Stats...
Additional Stats
Games By Position
Defensive Stats
Loading Games Played by Position...
Loading MLB Defensive Stats...
Batted Ball Stats
Loading Batted Ball Stats...
Stats Vs Upcoming Pitchers
Want more matchup stats?
View Ty France vs. Pitcher Stats
Loading Matchup Stats...
Mariners Depth Chart
Our full team depth charts are reserved for RotoWire subscribers.
Subscribe Now
Recent RotoWire Articles Featuring Ty France See More
MLB Roundtable Rankings: 2023 Fantasy Baseball Top 300
Yesterday
Yesterday
From Trea Turner to Spencer Torkelson, RotoWire's Roundtable Rankings crew offers their combined top 300 fantasy baseball rankings.
Rounding Third: Trevor Story and the Second Base Pool
19 days ago
19 days ago
Trevor Story's surgery changes the landscape both for the Red Sox and for the second base pool in redraft leagues.
2023 Fantasy Baseball Rankings - Way Too Early Top 300 Draft Ranks
105 days ago
105 days ago
James Anderson provides a way too early top 300 rankings for those who have the itch to start drafting for 2023.
FanDuel MLB: Thursday Targets
112 days ago
112 days ago
Chris Morgan checks out Thursday's two-game AL slate and thinks Yordan Alvarez might be able to add to his postseason heroics against the Mariners.
The Z Files: NFBC Holdem Rankings and Strategies
115 days ago
115 days ago
Todd Zola shares his gameplan and his rankings for NFBC Postseason Holdem contests.
Past Fantasy Outlooks
2022
2021
2020
Through April 19, France was slashing .311/.411/.525, but he left a game early after being hit by a pitch on the forearm. Over his next 20 games, France hit .157/.263/.229 before being put on the IL with wrist inflammation. Neither the HBP nor sore wrist were cited for the slump, but one or both likely contributed. France had the minimum stay, then didn't miss a game the rest of the way. He did endure another slump (2-for-21) while playing through a bone bruise on his wrist. France is an accumulator, benefiting from a career-low 16.3 K%. His power is average but a penchant for line drives supports a high BABIP. Seattle runs, but France's 21st percentile sprint speed grounds him. France is slated to again be the Mariners' everyday first baseman, but he'll also qualify at second where his numbers play better for fantasy. France's solid contact provides a floor. Just beware hitting line drives can be a fleeting skill.
On the surface, France's 2020 season appears to be a breakthrough campaign, but the underlying metrics say, "proceed with caution." He began the season with the Padres and was slashing .314/.375/.510 when he was dealt to the Mariners at the trade deadline. France recorded a .300/.364/.444 line with Seattle. While his expected stats were just a little shy of his actual marks, France's eighth percentile average exit velocity and 11th percentile hard-hit rate indicate he's working with a small margin of error and is likely in store for regression on his .390 BABIP. Seattle has several players capable of playing multiple positions, so if France has a poor spring or struggles in season, he's a risk to fall into a utility role or perhaps even return to the minors. France's 1.247 OPS back in 2019 for Triple-A El Paso is still enticing, but it's probably a mirage.
France had the type of minor-league season that looks like a typo. He thoroughly enjoyed the spoils of the juiced ball in the Pacific Coast League and playing in El Paso, hitting .399/.477/.770 in 348 plate appearance with 27 homers and 172 runs-plus-RBI. He earned a promotion to San Diego, where his production returned to a more believable level. That said, 34 homers, 103 runs and 113 RBI in a season is some accomplishment. He also has a knack as a ball magnet at the plate, having been hit by pitches at least 25 times in each of the past four seasons. The Padres brought in Jurickson Profar to take over at second base in 2020, though France arguably has more upside at this point. Given the roster construction, France would likely be hitting seventh or eighth even if he were to take over as the starter eventually.
More Fantasy News