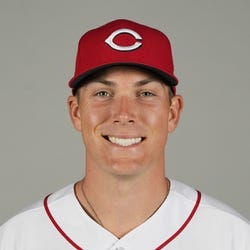 Out
Injury Collarbone
Est. Return 2/1/2023
2022 Stats
AVG
.319
HR
6
RBI
35
R
24
SB
1
2023 Projections
AVG
HR
RBI
R
SB
Unlock Our Projections
2023 Fantasy Outlook
Stephenson was a bright spot for the Reds when on the field in 2023, but he was limited to just 50 games around a series of injuries. A broken clavicle put him on the shelf for good in late July. The concussion he suffered early on was the third of his playing career by his own admission, creating some talk among Reds fans that Stephenson may eventually need to move off the catcher position. By all accounts Stephenson is intent on catching until he isn't allowed to anymore, and if a move is necessary in time, Stephenson's bat should play well enough at first base. With better health, Stephenson could emerge as a top-10 hitter at the catcher position while playing his home games at hitter-friendly Great American Ball Park. Read Past Outlooks
read more
RANKS
#127
ADP
#

* Exit Velocity and Barrels/PA % are benchmarked against 2019 data (min 400 PA) and Hard Hit Rate is benchmarked against last season's data (min 400 PA). See here for more exit velocity/barrels stats plus an explanation of current limitations with that data set.
BB/K
0.26
BB Rate
6.6%
K Rate
25.7%
BABIP
.409
ISO
.163
AVG
.319
OBP
.372
SLG
.482
OPS
.854
wOBA
.373
Exit Velocity
87.1 mph
Hard Hit Rate
32.2%
Barrels/PA
4.4%
Expected BA
.260
Expected SLG
.394
Sprint Speed
23.9 ft/sec
Ground Ball %
41.3%
Line Drive %
28.9%
Fly Ball %
29.8%
Prospect Rankings History
View Complete Tyler Stephenson Prospect Ranking History
Advanced Batting Stats
Loading Advanced Batting Stats...
Additional Stats
Games By Position
Defensive Stats
Loading Games Played by Position...
Loading MLB Defensive Stats...
Batted Ball Stats
Loading Batted Ball Stats...
Stats Vs Upcoming Pitchers
Want more matchup stats?
View Tyler Stephenson vs. Pitcher Stats
Loading Matchup Stats...
Reds Depth Chart
Our full team depth charts are reserved for RotoWire subscribers.
Subscribe Now
Past Fantasy Outlooks
2022
2021
2020
2019
2016
Stephenson finally gained a foothold in the majors in 2021, hitting .286/.366/.431 with 10 homers, 45 RBI and 56 runs in 402 plate appearances. Now with Tucker Barnhart on the Tigers, the path is clear for him to be the full-time starter with the Reds. Stephenson was originally slated for platoon duty against left-handed starters, but that role grew over the season where he was essentially splitting time with Barnhart. He didn't have a big lefty-right split, trading some power for better on-base results against righties. Stephenson also hit fifth or higher in the order in all but 16 of his games, which bodes well for his spot in 2022. The Reds signed Aramis Garcia to be his backup, so this should be a traditional starter/backup set up in his favor in 2022, rather than a platoon.
In his first major-league game July 27 against the Cubs, Stephenson homered in his first at-bat, singled in his next at-bat and then drew a walk in his final plate appearance of the night. He then got his next chance to hit on -- wait for it -- Sept. 10. That's right, a team that was desperate for offense and getting below-average offensive production from the catcher position couldn't see fit to give one of its better hitting prospects an at-bat in over a month, and gave him only 20 PA all season. This coming season promises to provide more opportunities for Stephenson after the Reds designated Curt Casali for assignment. Keep in mind, however, that Stephenson is a right-handed hitter and thus could be stuck on the lesser side of a platoon with Tucker Barnhart, should the Reds decide to platoon the two catchers.
Stephenson's career has been stalled by injuries since he was taken in the first round of the 2015 draft, but he's made it through the last two years relatively healthy, and has been adding skills along the way. He maintained excellent plate discipline despite hitting the Double-A wall (metaphorically, not literally) at Chattanooga, walking over 10% of the time for the third season in a row while striking out 60 times. He hasn't hit for much power yet, but he's adding weight to his 6-foot-4 frame, and at times has demonstrated that he's capable of hitting for power, including at the Arizona Fall League Fall Stars Game, where he hit a massive shot to center. His framing gets panned by scouts, but he has a big arm and good makeup. The Reds will probably give him most of the 2020 season at Triple-A Louisville, but an early callup is possible if Tucker Barnhart starts slowly at the plate.
Stephenson, the Reds' first-round pick in 2015, finally made it through a full minor-league season without suffering a major injury. In 2016, it was a wrist injury that limited him to just 39 games at Low-A Dayton. In 2017, while still at Dayton, his season ended in July due to a thumb injury, capping him at 80 games. He finally moved up to High-A Daytona last year and played 109 games, hitting .250/.338/.392 with 11 homers. That appears underwhelming, but keep in mind that he was in a tough park and in a tough league to hit, and his primary focus was trying to get up to speed defensively behind the plate. He doesn't have the profile of an elite prospect, but catchers often move up at a slower pace anyhow. He'll likely arrive with the big club in 2020 or 2021.
The Reds drafted Stephenson with the 11th overall pick in 2015 as the first catcher taken in the draft. He's bigger than most catchers at 6-foot-4 and 210 pounds, but the Reds are confident that he can remain behind the plate nonetheless, as they like his defensive skills, particularly his strong throwing arm. His professional debut at rookie-level Billings netted just middling results (.268/.352/.361 with just one homer in 54 games), but that's not too worrisome yet. He'll be a slow-cook prospect - it may take him four-to-five years before we see him in Cincinnati.
More Fantasy News