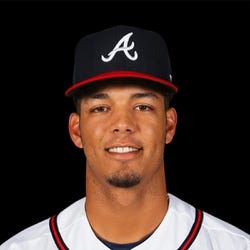 2022 Stats
AVG
.291
HR
5
RBI
18
R
24
SB
5
2023 Projections
AVG
HR
RBI
R
SB
Unlock Our Projections
2023 Fantasy Outlook
Grissom began the season with High-A Rome before being promoted to Double-A Mississippi. Atlanta summoned him in early August, and he filled in admirably, posting a .291/.353/.440 line in 156 plate appearances. However, a .163/.250/.163 stretch for two weeks in September cost Grissom his starting job for the last ten games and into the playoffs. Grissom's early success was driven by a high BABIP, so regression was expected. He fanned a little more in the bigs, but that's to be expected. Even though he was mostly a shortstop in the minors, Grissom played second with the Braves. With Ozzie Albies back, Grissom could play shortstop or outfield. Ron Washington worked with Grissom in case the move to short manifests. Grissom is looking at a long and productive career, but his plausible outcomes this season range from a full-time job to struggling in the spring and opening the season with Triple-A Gwinnett. Read Past Outlooks
read more
RANKSFrom Preseason
#