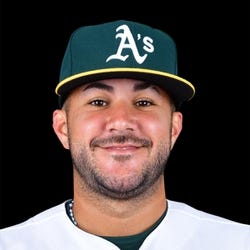 * Exit Velocity and Barrels/PA % are benchmarked against 2019 data (min 400 PA) and Hard Hit Rate is benchmarked against last season's data (min 400 PA). See here for more exit velocity/barrels stats plus an explanation of current limitations with that data set.
BB/K
0.53
BB Rate
9.9%
K Rate
18.6%
BABIP
.270
ISO
.067
AVG
.220
OBP
.300
SLG
.287
OPS
.587
wOBA
.269
Exit Velocity
89.3 mph
Hard Hit Rate
26.8%
Barrels/PA
2.8%
Expected BA
.243
Expected SLG
.343
Sprint Speed
22.6 ft/sec
Ground Ball %
43.0%
Line Drive %
23.5%
Fly Ball %
33.5%
Advanced Batting Stats
Loading Advanced Batting Stats...
Additional Stats
Games By Position
Defensive Stats
Loading Games Played by Position...
Loading MLB Defensive Stats...
Batted Ball Stats
Loading Batted Ball Stats...
Stats Vs Upcoming Pitchers
Want more matchup stats?
View Vimael Machin vs. Pitcher Stats
Loading Matchup Stats...
Athletics Depth Chart
Our full team depth charts are reserved for RotoWire subscribers.
Subscribe Now
Recent RotoWire Articles Featuring Vimael Machin
AL FAAB Factor: Waiver Pickups of the Week
107 days ago
107 days ago
Erik Siegrist reviews the available talent in the AL as early-season surprise Manuel Margot returns to action in the Tampa Bay outfield.
AL FAAB Factor: Waiver Pickups of the Week
August 15, 2021
August 15, 2021
Erik Siegrist reviews the talent available on AL waiver wires as some surprising names have been running wild on the basepaths, including the Yankees' Tyler Wade.
Past Fantasy Outlooks
2021
2020
Acquired in the 2019 Rule 5 Draft, Machin made his MLB debut with the Athletics in 2020 as a 26-year-old. He fit the classic Oakland mold, defensively capable of playing across the entire infield. As a prospect, Machin showed the ability to make consistent contact but paired that with a lack of power. That profile translated to the major-league level, as Machin posted a 14.1 K% and 11.3 BB% across 71 plate appearances in 2020. His power was nonexistent however, as he recorded a .238 slugging percentage and .032 ISO without registering a single barreled ball. Machin also doesn't possess speed on the base paths, having never posted double-digit steals in a season and posting a 26th percentile sprint speed in 2020. Machin should have the chance to compete for playing time this season assuming the absence of Marcus Semien. However, his most likely role will be a Quad-A utility player.
The Phillies made Machin the 15th pick of the Rule 5 draft, taking him from the Cubs then promptly selling him to the Athletics. Machin spent most the 2019 campaign with Double-A Tennessee before a short stint with Triple-A Iowa to end the season. Oakland is drawn to his ability to play all four infield spots as well as the plate patience that used to characterize the organization, walking 69 times to just 62 strikeouts combined last season. Machin doesn't dazzle in power or speed, but if he can translate his plate skills to the majors, his defensive versatility increases his chances of staying on the Oakland roster and not be offered back to the Cubs. If he has an impressive spring, the 26-year-old left-handed swinger could even be in the mix for regular playing time at second base. If it's clear Machin will spend time at the keystone, he's an end-game candidate in AL-only formats.
More Fantasy News