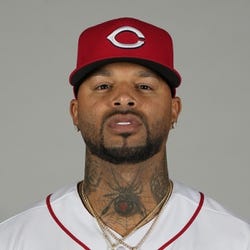 Out
Injury Elbow
Est. Return 9/1/2023
2022 Stats
W-L
1-6
ERA
7.61
WHIP
1.91
K
29
SV
0
2023 Projections
W-L
ERA
WHIP
K
SV
Unlock Our Projections
2023 Fantasy Outlook
Gutierrez's rookie season in 2021 finished on a sour note and that carried over into 2022, to say the least. The right-hander was demoted to the bullpen after putting up a 7.71 ERA over his first eight starts and he lasted just two relief outings before going down with an elbow injury which eventually required Tommy John surgery in late July. Gutierrez could potentially make it back late this season, particularly if the Reds opt to build him back up as a reliever. He's certainly not going to have any fantasy value in 2023, though. Read Past Outlooks
read more
League Majors
Bats R
Throws R
40 Man Yes
Height 6'1"
Weight 190
DOB 9/18/1995
Born Havana, Cuba
College None
Drafted 2016 CIN
$Signed a $4.75 million contract with the Reds in September of 2016.

* Exit Velocity, Barrels/BBE %, Balls Hit 95+ MPH %, and Spin Rate are benchmarked against 2019 data (min 120 IP). See here for more exit velocity/barrels stats plus an explanation of current limitations with that data set.
K/BB
1.21
K/9
7.1
BB/9
5.9
HR/9
2.0
Fastball
92.9 mph
ERA
7.61
WHIP
1.91
BABIP
.338
GB/FB
0.81
Left On Base
66.3%
Exit Velocity
80.1 mph
Barrels/BBE
5.3%
Spin Rate
2193 rpm
Balls Hit 95+ MPH
23.5%
Swinging Strike
7.3%
Prospect Rankings History
View Complete Vladimir Gutierrez Prospect Ranking History
Advanced Pitching Stats
Loading Advanced Pitching Stats...
Defensive Stats
Loading MLB Defensive Stats...
Stats Vs Today's Lineup
Want more matchup stats?
View Vladimir Gutierrez vs. Batter Stats
Loading Matchup Stats...
Reds Depth Chart
Our full team depth charts are reserved for RotoWire subscribers.
Subscribe Now
Recent RotoWire Articles Featuring Vladimir Gutierrez See More
Todd's Takes: Arsenals and Angles
154 days ago
154 days ago
Todd Zola analyzes pitchers with limited arsenals before tackling the most interesting fantasy fall-out from Wednesday's schedule.
Past Fantasy Outlooks
2022
2017
2016
Gutierrez made his big-league debut last season and started 22 games for the Reds, and he finished with a 4.74 ERA, 1.41 WHIP and 88:46 K:BB across 114 innings. The 26-year-old has a solid four-pitch mix but had an unexceptional 17.7 percent strikeout rate and 9.3 percent walk rate. Gutierrez will begin 2022 in Cincinnati's starting rotation, but given his low strikeout numbers and the fact the team is opting for a rebuild, he's unlikely to be a consistent fantasy asset outside of deeper formats.
The Reds signed the 21-year-old Cuban righty for $4.75 million in late August, which amounts to a $9.5 million commitment from the team, as they exceeded their international bonus pool and incurred a 100 percent tax. At 6-foot-3, 175 pounds, he has a more projectable frame than some of the other top pitchers from last year's international class. Gutierrez can touch 97 mph with his fastball, but typically sits in the low-90s while also bringing a potentially plus curveball to the table. He has flashed an average changeup, and further development of that pitch will be critical for him to make it as a starter. Given his age and repertoire, he should be able to handle a full season league in 2017, likely getting assigned to the Midwest League or Florida State League. Based on the recent track record of Cuban pitchers that come stateside, it is fair to assign more bullpen risk to Gutierrez than a typical pitching prospect with his physical tools.
Gutierrez was perhaps the top pitching prospect in Cuba, winning the Serie Nacional's rookie of the year in the 2014-15 season. In August, Baseball America ranked him as the No. 12 player in Cuba. At age 19, Gutierrez could command a large contract from a MLB team, as he's a 6-foot-3 right-hander with a plus curveball and a projectable frame that should allow him to increase the velocity on his fastball (currently 88-93 mph). Gutierrez also mixes in a changeup and he projects as a starter in the big leagues long-term. However, it may be well into 2016 before he signs as he'll need to secure residency in another country and be declared a free agent in order to sign with a big league club.
More Fantasy News