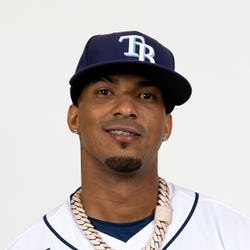 2022 Stats
AVG
.277
HR
6
RBI
33
R
46
SB
8
2023 Projections
AVG
HR
RBI
R
SB
Unlock Our Projections
2023 Fantasy Outlook
The Rays bet big on Franco last winter in the form of an 11-year, $182 million contract extension. This was after just 70 games at the big-league level for Franco, so it's clear Tampa Bay, a notoriously "frugal" franchise, is head over heels as are most evaluators. His 2022 season did not go as planned as Franco battled a quadriceps injury before undergoing surgery in July to repair a fractured hamate bone. While his numbers in 83 games leave something to be desired, Franco continued to display excellent contact skills, with Statcast putting him in the top 4% of the league in terms of xBA. He was also a perfect 8-for-8 on the basepaths. The switch hitter returned to play in 25 regular-season games down the stretch, slashing .322/.381/.471. In time, Franco could prove to be a better-in-real-life-than-fantasy sort of player, but beware of any definitive labels put on this all-world talent as they could look silly a year or two from now. Read Past Outlooks
read more
RANKSFrom Preseason
#