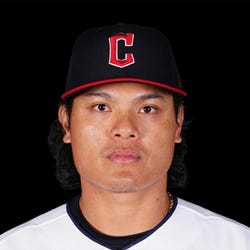 * Exit Velocity and Barrels/PA % are benchmarked against 2019 data (min 400 PA) and Hard Hit Rate is benchmarked against last season's data (min 400 PA). See here for more exit velocity/barrels stats plus an explanation of current limitations with that data set.
BB/K
0.27
BB Rate
8.4%
K Rate
31.1%
BABIP
.290
ISO
.107
AVG
.208
OBP
.289
SLG
.315
OPS
.605
wOBA
.275
Exit Velocity
88.8 mph
Hard Hit Rate
28.8%
Barrels/PA
5.3%
Expected BA
.213
Expected SLG
.357
Sprint Speed
26.0 ft/sec
Ground Ball %
42.3%
Line Drive %
17.1%
Fly Ball %
40.5%
Prospect Rankings History
Advanced Batting Stats
Loading Advanced Batting Stats...
Additional Stats
Games By Position
Defensive Stats
Loading Games Played by Position...
Loading MLB Defensive Stats...
Batted Ball Stats
Loading Batted Ball Stats...
Stats Vs Upcoming Pitchers
Want more matchup stats?
View Yu Chang vs. Pitcher Stats
Loading Matchup Stats...
Recent RotoWire Articles Featuring Yu Chang See More
AL FAAB Factor: Waiver Pickups of the Week
157 days ago
157 days ago
Erik Siegrist checks out the American League waiver wire after September roster expansion as Gunnar Henderson provides a boost to Baltimore's playoff push.
FanDuel MLB: Friday Targets
180 days ago
180 days ago
Chris Bennett previews Friday’s 13-game FanDuel offering, making his picks to help you craft a winning DFS lineup.
NL FAAB Factor: Waiver Pickups of the Week
220 days ago
220 days ago
Jan Levine has identified a few relief pitching options, including one leading the way in Atlanta.
NL FAAB Factor: Waiver Pickups of the Week
227 days ago
227 days ago
Among his recommendations this week, Jan Levine profiles a couple middle-infield phenoms who provide plenty of potential.
NL FAAB Factor: Waiver Pickups of the Week
248 days ago
248 days ago
A couple middle infielders highlight Dan Marcus's list of NL additions.
Past Fantasy Outlooks
2022
2021
2020
2018
2017
Chang once again enters the 2022 campaign without a guaranteed spot in the lineup. The 26-year-old bounced between Cleveland and Triple-A Columbus last season, posting a lackluster .228/.267/.426 slash line across 251 plate appearances in the majors. He's a versatile defender capable of playing all around the infield, but his best path to playing time this season is likely a short-side platoon at either first base with Bobby Bradley or second base with Andres Gimenez. Owen Miller and Ernie Clement will also likely push Chang for a bench role for the remainder of spring training.
Some utility players see the field three or four times a week. Chang spent most of last season as Cleveland's reserve infielder, backing up Cesar Hernandez, Francisco Lindor and Jose Ramirez, who between them started 178 of 180 games. The Maytag repairman saw more action last season. Chang spent all but the last weekend on the major-league roster but appeared in only 10 games, stepping into the batter's box just 13 times. Like many young players, Chang could have benefited from more developmental time in Triple-A. He has displayed a bit of power and speed in the minors but needs to improve his bat-to-ball skills. There are openings on Cleveland's roster at the major-league level, so Chang should get a chance to compete for a job, and with half of last season's infield no longer on the club, Chang could enjoy more playing time.
Chang's mortal enemy should be Christian Arroyo. Both are going to compete for the same role on the team, but Arroyo will have the upper hand as he is out of minor-league options while Chang has one more year of the yo-yo treatment. Chang's defensive abilities mirror those of Arroyo, but it is Chang who has the better offensive profile of the two despite what we saw of him in his time at the big-league level last year. Chang accepts his walks, but his issues with contact limit his ability to hit for high average. Perhaps there is a happy medium coming between his contact and his power, and he'll likely get the chance to work on that more with a return trip to Akron, assuming Arroyo does not completely bomb this spring in Arizona.
Among qualified hitters, Chang's .220 average was third worst in the Eastern League, but because of his power (.241 ISO) and patience (10.2 percent walk rate), he was still well above league average (110 wRC+). His career-high 48.1 percent pull rate and career-worst 26.4 percent strikeout rate suggest he may have been selling out a little to get to that power, but his .254 BABIP is still quite a bit worse than we would expect to see if he had normal luck. So we have a power hitting shortstop whose batting average, while never likely to be all that high, was still deceivingly low last year. He has average speed and has had success on the bases (22-for-29) over the past two years, so he could chip in a handful of steals annually early in his big-league career. It's not the most exciting profile, especially considering he will have to move to second base or third base if he stays in this organization, but given his proximity to the big leagues and the fact he won't turn 23 until August, he is worth rostering in most dynasty leagues.
The 21-year-old shortstop from Taiwan continued his improvement in 2016. In 109 games at High-A Lynchburg, Chang slashed .256/.332/.463. He increased his average over 25 points and drew nearly 20 more walks than the season prior, showing an advanced approach at the dish. Chang also tapped into his power potential, smacking 13 home runs while driving home 70 runs. With 11 stolen bases to his credit as well in 2016, Chang is emerging as a prospect with significant upside. He must prove he can hit for an even higher average as he continues his ascension towards the majors. In addition, the Indians have budding superstar Francisco Lindor at shortstop for the foreseeable future, so a position change could be in the works. He should begin next season at Double-A.
More Fantasy News