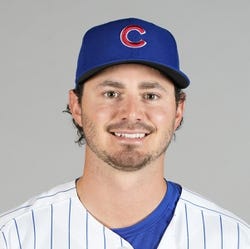 2022 Stats
AVG
.199
HR
5
RBI
14
R
21
SB
7
2023 Projections
AVG
HR
RBI
R
SB
Unlock Our Projections
2023 Fantasy Outlook
After beginning his career with two seasons and change in a Dodgers uniform, McKinstry finished 2022 with the Cubs after a midseason trade from Los Angeles. He showed good defensive versatility by appearing at five different positions, though he continued to do very little at the plate. He slashed .199/.273/.361 and contributed five home runs across 57 games. While those numbers don't jump off the page, McKinstry was at least able to record a career-high seven stolen bases on seven attempts. Heading into his age-28 season, McKinstry looks like a backup to Nick Madrigal and Nico Hoerner up the middle, and he could see some time in the outfield as well. His uncertain playing time and probable low batting average limits his appeal, though McKinstry could have a little value in deeper leagues if he somehow sees an expanded role and also continues to steal bases at a regular clip. Read Past Outlooks
read more
RANKS
#594
ADP
#

* Exit Velocity and Barrels/PA % are benchmarked against 2019 data (min 400 PA) and Hard Hit Rate is benchmarked against last season's data (min 400 PA). See here for more exit velocity/barrels stats plus an explanation of current limitations with that data set.
BB/K
0.31
BB Rate
8.6%
K Rate
28.1%
BABIP
.257
ISO
.163
AVG
.199
OBP
.273
SLG
.361
OPS
.635
wOBA
.282
Exit Velocity
86.4 mph
Hard Hit Rate
25.0%
Barrels/PA
2.7%
Expected BA
.229
Expected SLG
.342
Sprint Speed
24.7 ft/sec
Ground Ball %
37.2%
Line Drive %
24.8%
Fly Ball %
38.1%
Prospect Rankings History
View Complete Zach McKinstry Prospect Ranking History
Advanced Batting Stats
Loading Advanced Batting Stats...
Additional Stats
Games By Position
Defensive Stats
Loading Games Played by Position...
Loading MLB Defensive Stats...
Batted Ball Stats
Loading Batted Ball Stats...
Stats Vs Upcoming Pitchers
Want more matchup stats?
View Zach McKinstry vs. Pitcher Stats
Loading Matchup Stats...
Cubs Depth Chart
Our full team depth charts are reserved for RotoWire subscribers.
Subscribe Now
Recent RotoWire Articles Featuring Zach McKinstry See More
Collette Calls: Buckle Up
117 days ago
117 days ago
Jason Collette is excited for the increase in steals which the new rules should bring next season. Which hitters and pitchers will be affected the most?
NL FAAB Factor: Waiver Pickups of the Week
143 days ago
143 days ago
Jan Levine details a few NLers riding late-season surges, including a starter in Philly who's making the most of his opportunities.
Todd's Takes: Adjusting for Zombies and Lobs
174 days ago
174 days ago
Todd Zola breaks down Wednesday's MLB action and comments on extra innings and position players pitching.
National League Trade Deadline Reactions
179 days ago
179 days ago
Juan Soto was the headline trade in the National League, but Jeff Erickson breaks down all of the NL trades at the deadline.
NL FAAB Factor: Waiver Pickups of the Week
185 days ago
185 days ago
With only a couple days before the trade deadline, Jan Levine checks out a few NLers who could benefit from upcoming transactions.
Past Fantasy Outlooks
2021
2020
McKinstry came out of nowhere to appear on the Dodgers' radar by logging a 177 wRC+ in his first Triple-A stint in 2019. The 25-year-old followed with a strong spring training last season, logging a 1.314 OPS and drilling three homers over 31 plate appearances. Simply receiving a big-league call-up was an against-the-odds achievement in itself -- McKinstry was a slap-hitting 33rd-round pick in the 2016 first-year playoff draft -- and he ran with the opportunity, collecting a pair of hits in seven at-bats. McKinstry's minor-league track record reveals favorable walk and strikeout rates, which often translates to similar characteristics in the majors. The big question is whether the power that began to emerge in 2019 will continue to blossom as McKinstry further evolves as a hitter. If so, his ability to play all over the field could help McKinstry fill the type of super-utility role the Dodgers tend to covet.
He doesn't have much pedigree (33rd-round pick in 2016), but McKinstry earned a spot on the Dodgers' 40-man roster with a breakout 2019 at Double-A and Triple-A. He had excelled at some previous stops but was old for those levels, so his production didn't really register. However, he was 26% better than the average Texas League hitter and used the juiced ball and hitter-friendly environment of the Pacific Coast League to log a 177 wRC+ after his promotion. His strikeout rate was below 20% at both stops, and he utilized an all-fields line drive and flyball-oriented approach. McKinstry played double-digit games at second base, shortstop, third base and the outfield, which is critical, as he will probably have to break in as a super-utility option. He hits left-handed but had reverse splits last year (.873 OPS vs. RHP, .924 OPS vs. LHP). McKinstry has a chance to hit for a high average with 20-homer pop.
More Fantasy News