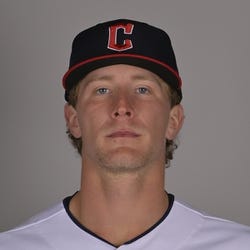 2022 Stats
W-L
3-12
ERA
4.31
WHIP
1.32
K
100
SV
0
2023 Projections
W-L
ERA
WHIP
K
SV
Unlock Our Projections
2023 Fantasy Outlook
Another year, another fluke injury -- Plesac missed time in 2022 after breaking his hand while punching the mound after yielding three home runs in Seattle. Opposing hitters continue to feast on his fastball, tagging him for a .306 batting average and eight home runs on the pitch he threw 42.7 percent of the time last year. His slider and curveball were his two best pitches, but he's still struggled to make up for mediocre velocity with effective swing-and-miss stuff, posting a 6.8 K/9 and 2.6 BB/9 over 131.2 innings. He finished last year in the 21st percentile for whiff percentage. While his passion is evident from frustration-related injuries, the end results put him as the No. 4 or 5 starter in the Guardians' rotation and a low-upside, late-round pick in fantasy. Read Past Outlooks
read more
RANKSFrom Preseason
#

* Exit Velocity, Barrels/BBE %, Balls Hit 95+ MPH %, and Spin Rate are benchmarked against 2019 data (min 120 IP). See here for more exit velocity/barrels stats plus an explanation of current limitations with that data set.
K/BB
2.63
K/9
6.8
BB/9
2.6
HR/9
1.3
Fastball
92.0 mph
ERA
4.31
WHIP
1.32
BABIP
.301
GB/FB
1.18
Left On Base
67.8%
Exit Velocity
82.4 mph
Barrels/BBE
4.7%
Spin Rate
2007 rpm
Balls Hit 95+ MPH
24.3%
Swinging Strike
10.6%
Prospect Rankings History
View Complete Zach Plesac Prospect Ranking History
Advanced Pitching Stats
Loading Advanced Pitching Stats...
Defensive Stats
Loading MLB Defensive Stats...
Stats Vs Today's Lineup
Want more matchup stats?
View Zach Plesac vs. Batter Stats
Loading Matchup Stats...
Guardians Depth Chart
Our full team depth charts are reserved for RotoWire subscribers.
Subscribe Now
Recent RotoWire Articles Featuring Zach Plesac
MLB Playoff Picks: MLB Division Series Betting Preview
52 days ago
52 days ago
Erik Halterman gives his betting breakdown for the Divisional Series round of the MLB playoffs with odds and best bets from each matchup.
The Z Files: NFBC Holdem Rankings and Strategies
52 days ago
52 days ago
Todd Zola shares his gameplan and his rankings for NFBC Postseason Holdem contests.
MLB: Postseason Cheat Sheet and Strategy
56 days ago
56 days ago
Todd Zola tackles the MLB Postseason Cheat Sheet for RotoWire and discusses his approach to postseason leagues this year.
Weekly Pitcher Rankings: And Then There Was One
68 days ago
68 days ago
Robbie Ray tops Todd Zola's weekly pitcher rankings thanks to a pair of home matchups against a pair of struggling opponents.
AL FAAB Factor: Waiver Pickups of the Week
88 days ago
88 days ago
Erik Siegrist checks out the American League waiver wire after September roster expansion as Gunnar Henderson provides a boost to Baltimore's playoff push.
Past Fantasy Outlooks
2022
2021
2020
This needs to be said right out of the gate: Plesac was forced to miss five weeks of the 2021 season after injuring his pitching thumb while aggressively ripping off his jersey after a rough outing. Pleasac did run into 10 wins and still pitched to a 1.20 WHIP, but that was offset by a 4.67 ERA and a ghastly drop in his strikeout rate that fell 11 full percentage points. The 24.8 K-BB% from 2020 fell down to 11.0% in 2021 and took him from fantasy sleeper to fantasy headache. His Statcast page has more blue ink than a Bic pen exploding in your shirt pocket, and most of that comes from how poorly his fastball performed (the league hit .326 off the pitch with a .626 SLG). He threw it 42% of the time and the expected stats validate the pitch's poor outcomes. These same warning signs were there heading into 2021, especially with his fastball.
Fantasy players are excited about Plesac. He looked like one of the top up-and-coming starters in the game in 2020, going 4-2 with a 2.28 ERA and 0.80 WHIP in 55.1 innings. He paired a 27.7 K% with a minuscule 2.9 BB% while holding opposing hitters below the Mendoza Line combined. It was not all good, however, as Plesac violated COVID-19 protocols, got sent home and subsequently spent time at Cleveland's alternate training site. Plesac's fastball is rather hittable, but he has a great swing-and-miss slider and enjoyed great results with his changeup as well last season. Perspective is important; Plesac was mostly an afterthought at this time last year, his FIP was a run worse than his ERA -- he had a 91.7 LOB% -- and the question is how much, not if, his walk rate will regress. The early market has him just outside the top 15 starting pitchers. It's quite the leap of faith based on eight starts.
Plesac opened the season at Double-A, but injuries to Cleveland's rotation allowed him to make his big-league debut at the end of May. While the right-hander finished his rookie campaign with respectable numbers -- going 8-6 with a 3.81 ERA and 1.23 WHIP across 21 starts -- he provided plenty of reasons to be skeptical about his ability to repeat that success, most of which are reflected in his 4.94 FIP and 5.13 SIERA. Plesac didn't miss many bats, evidenced by his 9.9% swinging-strike rate and 6.8 K/9, while the contact he allowed was often problematic. His 7.6 Barrel% coupled with his 39.1 GB% resulted in a 1.5 HR/9. He also benefitted from a 78.6% strand rate -- which is tough for a starting pitcher to sustain -- and a .258 BABIP, which isn't supported by his batted-ball profile. Plesac will compete for a spot in the Indians' rotation in 2020, though his upside is limited regardless of his role.
More Fantasy News