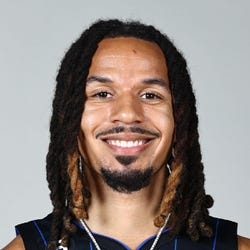 2022 Stats
PTS
11.9
REB
4.5
AST
4.1
STL
0.7
BLK
0.5
ROS Projections
PTS
REB
AST
STL
BLK
Unlock Our Projections
2022 Fantasy Outlook
After a solid rookie season, Anthony improved as a sophomore in 2021-22. He emerged as a full-time starting point guard, with Markelle Fultz sitting out nearly the entire year while recovering from a torn ACL. In 31.7 minutes per game, Anthony averaged 16.3 points on 39/34/85 shooting, 5.7 assists and 5.4 rebounds. His impressive assist numbers and quality efficiency from the free-throw line assisted his 94th overall rank in eight-category leagues per game. However, Anthony's field-goal percentage was an issue, and he only provided a combined 1.0 steals-plus-blocks. This year, his circumstances seem bound to change, and he may have trouble producing at the same rate. Fultz is healthy, and the franchise appears committed to installing him as the starting point guard. Orlando also invested a fifth overall pick in Jalen Suggs, a strong candidate to start at shooting guard. That leaves Anthony coming off the bench. If Suggs struggles again, Anthony may maneuver his way into near-starter minutes, but fantasy managers can't bank on that. Even if Anthony thrives as a sixth man, his upside is significantly capped as long as Fultz and Suggs are healthy. First overall pick Paolo Banchero will need his touches as well, further diluting his touches. Anthony could be worth a late-round flier, but prospective managers should temper expectations following a decent second season. Read Past Outlooks
read more
Height 6'3"
Weight 185
DOB 5/15/2000
College North Carolina
Drafted 1st Rd, #15 in 2020
$Signed a two-year, $6.73 million contract with the Magic in November of 2020. Magic exercised $3.61 million team option for 2022-23 in October of 2021. Magic exercised $5.54 million team option for 2023-24 in October of 2022.
Personal Bio/PreCareer Summary

Anthony was born in Portland, Oregon on May 15, 2000. He's the son of Crystal McCrary and Greg Anthony. Greg won an NCAA title with UNLV in 1990 and was an 11-year NBA veteran. As a child, Cole moved to New York City. Anthony originally played baseball but decided to focus on basketball in fifth grade. He lived in New York City through his junior year of high school before transferring to Oak Hill. During Anthony's freshman and sophomore years at Archbishop Molloy, he excelled and led his team to the CHSAA Class AA city championship finals. As a junior, Anthony averaged a league-high 23.4 points, 7.8 rebounds and 4.1 assists per game and was named to the USA Today All-USA third team. At Oak Hill as a senior, Anthony averaged 18.5 points, 10.2 rebounds and 10.2 assists per game and became the first player in school history to average a triple-double. Anthony was voted onto the 2019 USA Today All-USA first team. Anthony also won MVP at the 2019 McDonald's All-American Game, the Nike Hoop Summit and the Jordan Brand Classic. After the 2018-19 high school basketball season, Anthony was named the Virginia Gatorade Player of the Year for success in both basketball and academics. As a freshman at North Carolina, he was named to third-team All-ACC despite missing 11 games and averaged 18.5 points, 5.7 rebounds and 4.0 assists per college contest. Anthony came to North Carolina with an outstanding recruiting pedigree, and the 6-3 guard put that on display immediately, recording 34 points and 11 rebounds in the season opener against Notre Dame. He proceeded to reach double figures in seven of his next eight games, collecting 10 rebounds twice more over that span. Anthony then suffered a knee injury that cost him 11 games, but he returned and averaged 18.1 PPG over the final 13 contests of his collegiate career. Despite the time off, Anthony still managed to make the ACC All-Freshman team, as well as earn third-team All-ACC honors. He was also ninth in the conference in free throws attempted. After finishing the shortened season with averages of 18.5 points, 5.7 rebounds and 4.0 assists, Anthony declared his intentions to go pro in mid-April.

GOrlando Magic
See All NBA Rumors
Past Fantasy Outlooks
2021
2020
Things were looking up for Anthony midway through his 2020-21 rookie season. Starting point guard Markelle Fultz suffered a torn ACL in early January and the Magic immediately inserted Anthony into the starting lineup. Through 17 consecutive starts, Anthony posted 12.1 points, 4.2 rebounds, 3.9 assists and 1.4 three-pointers over 29.1 minutes per game. But then a rib injury forced the rookie to miss 25 straight games. He returned and eventually earned back the starting spot. Over the last 17 games of the season, Anthony started every game and delivered 16.2 points and 5.1 boards per contest on a depleted Magic squad. The problem for Anthony this season is two-fold. First, Fultz returns from his injury probably in December and is expected to once again start. Second, the Magic pulled an illusion and drafted rising star Jalen Suggs with the fifth overall pick this summer. Plan A for Orlando is to give both Fultz and Suggs monster backcourt minutes as the team rebuilds. That would bump combo-guard Anthony back to a reserve role. That said, the Magic still lack depth and Fultz's injury issues are well documented. Worst case scenario is Orlando turns to Anthony as its points-off-the-bench gunner who should still see north of 22 minutes per contest. Expect the usual sophomore shooting improvement from Anthony, who only shot 39.7 percent as a rookie. But an increase in counting stats could be hard to come by if Fultz returns and stays healthy.
The score-first point guard should have his chance to shine with the Magic as a backup guard (at the very least). In his freshman season at North Carolina, Anthony averaged 18.5 points, 5.7 rebounds, 4.0 assists and 1.3 steals, but shot a lackluster 38.0 percent from the field. The 6-foot-3 guard was a bit closer to par from three-point land, though, at 34.8 percent. Anthony figures to compete with Markelle Fultz for minutes at point guard, and Anthony could certainly find himself in a shooting-guard role, as well. As a rookie, he's expected to be mostly helpful fantasy-wise in the points category, but a poor field-goal percentage could drive down his effectiveness. If he lands a starting job, he'll be worth exploring as a flier in standard leagues.
More Fantasy News