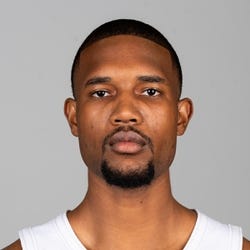 2022 Stats
PTS
15.3
REB
9.0
AST
2.7
STL
0.7
BLK
1.4
ROS Projections
PTS
REB
AST
STL
BLK
Unlock Our Projections
2022 Fantasy Outlook
The No. 3 overall pick last season, Mobley put together an excellent rookie campaign. He was voted to First Team All-Rookie and came in second place in one of the closest Rookie of the Year award races in recent memory -- Scottie Barnes claimed the award. Mobley got out of the gates strong and was consistent month over month. Overall, he saw 33.8 minutes per game and averaged 15.0 points, 8.3 rebounds, 2.5 assists, 1.7 blocks and 0.8 steals. That was good for rank 75 in per-game fantasy production. Mobley's shooting efficiency (51/66/25) was a mixed bag, but clearing the 50 percent mark as a rookie is encouraging. He took just 1.3 three-point attempts per game, but improving in that area will be important while playing alongside a traditional center like Jarrett Allen. It will be more important for fantasy managers if Mobley can improve his efficiency from the charity stripe. He shot 69.4 percent on freebies during his lone season at USC compared to 66.3 percent as a rookie, so there's room for improvement, but it seems unlikely he'll be great in that area. The strongest part of Mobley's game is his defense. He's a great rim protector but also has the coordination and footspeed to hang on the perimeter against guards and wings. He also showed some passing ability, but he'll only handle the ball so much with Darius Garland and Donovan Mitchell running the show. This season, fantasy managers have a right to be optimistic and select Mobley much earlier than he ranked last season. It's important to keep in mind that his rebounding and shot-blocking upside -- while great in the long term -- is a bit capped for next season given the presence of Allen on the inside, as he's a more traditional rebounding and shot-blocking big himself. But Mobley still has an opportunity to improve in that area, and with some offensive strides, he could quickly turn into one of the better two-way bigs in the game. Read Past Outlooks
read more
Height 6'11"
Weight 215
DOB 6/18/2001
College USC
Drafted 1st Rd, #3 in 2021
$Signed a two-year, $16.55 million contract with the Cavaliers in August of 2021. Cavaliers exercised $8.88 million team option for 2023-24 in October of 2022. Contract includes $11.23 million team option for 2024-25.
Personal Bio/PreCareer Summary

Mobley was a force for the Trojans on both ends of the floor in his first and only season on campus. Offensively, he led the Pac-12 with 540 points scored while shooting a league-high 57.8 percent from the field. He also led the conference in rebounding (8.7 rpg) while blocking 95 total shots -- good for second in the entire country. Mobley reached double figures in all but two conference games and collected 10 double-doubles in league play alone. Effectively, it comes as no surprise that Mobley was given Pac-12 Defensive Player of the Year honors, in addition to getting a first-team all-conference nod. In the postseason, Mobley helped carry the Trojans to the Elite Eight in a run that included a double-double in an upset against Kansas.

FCleveland Cavaliers
See All NBA Rumors
2021 Fantasy Outlook
Easily the most-talented big man in the draft, Mobley will step in as a starter for the Cavs from Day 1. While Cleveland retained Jarrett Allen in free agency, the two bigs represent the frontcourt of the future, with Mobley's floor-spacing ability likely to land him at the power forward spot for the foreseeable future. Right now, Mobley is more comfortable in the mid-range than from three (30% 3PT as a freshman at USC last season), but he has a smooth jumper that should improve as he develops. Playing alongside Allen could sap some of Mobley's upside as a rebounder, but he's a much better passer than Allen, and his 2.9 blocks per game at USC suggest that it could be his most-valuable stat category when it comes to fantasy basketball. Cleveland's sign-and-trade deal for Lauri Markkanen will complicate Mobley's development. The Cavs gave up Larry Nance for Markkanen and signed him to a four year deal, so clearly Cleveland is committed to both Markkanen and Mobley. How the minutes are divided amongst those two and Kevin Love at the four will be very interesting. Love has stated he has no interest in a buy out. Like all rookies, expect Mobley to go through some ups and downs, but he'll likely come off the board in the later-middle-rounds of most fantasy drafts.
More Fantasy News