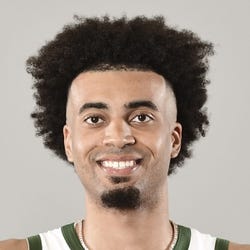 Jordan Nwora was born Sept. 9, 1988 to parents Amy and Alex Nwora, who he credits as the biggest influences in his athletic career. He also has three younger siblings: Ronni, Caeli and Alexis. Nwora attended high school at The Park School in Snyder, New York, where he won a state championship his junior year and tallied over 1,000 career points. He moved to The Vermont Academy for his senior season and put up over 500 total points. Nwora ultimately selected Louisville over the likes of NC State, California, Georgia Tech, Marquette and Oklahoma State, and majored in exercise science while with the Cardinals. The celebrity Nwora would most like to meet is Beyonce, and he feels Will Smith would be the best choice to play him in a movie. You can follow Nwora on Twitter (@JordanNwora) or on Instagram (@jordannwora). Nwora may not have entered Louisville with five-star recruiting hype, but he came ready to work and gradually improved with each season of play. He scored 5.7 points over 28 appearances in his freshman season, but took a massive leap forward in his sophomore year. Suddenly Nwora was the focal point of the offense, putting up 17.0 points and 7.6 rebounds. He won Most Improved Player in the ACC that season while also receiving a third-team All-ACC nod. Nwora got his draft stock tested after that breakout year, but ultimately elected to return to Louisville for his junior season. The 6-7 forward was a third-team All-American selection and first-team All-ACC after putting up career highs in scoring (18.0 ppg) and rebounding (7.7 rpg). He was runner-up in ACC Player of the Year voting, plus was a finalist for the Julius Erving Award and even made the Wooden Award ballot.

FMilwaukee Bucks
See All NBA Rumors
2021 Fantasy Outlook
Nwora played in just 30 games during his rookie season, most of them coming when the Bucks had injury issues or in lopsided contests. When presented the opportunity, Nwora was able to show some potential as he scored 20-plus points in three games and racked up a career-high 34 points in May. Given the Bucks' solid core, Nwora is unlikely to earn substantially more minutes or make enough of an impact in the upcoming campaign to be relevant in fantasy leagues.
More Fantasy News