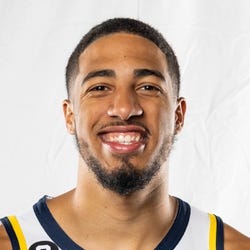 Out
Injury Knee
Est. Return 2/2/2023
2022 Stats
PTS
20.2
REB
4.0
AST
10.2
STL
1.8
BLK
0.4
ROS Projections
PTS
REB
AST
STL
BLK
Unlock Our Projections
2022 Fantasy Outlook
After an impressive first campaign that netted him first First Team All-Rookie in 2021, Haliburton improved as a sophomore last year. He began the season with the Kings, where he started slow but picked things up in December and January, which coincided with De'Aaron Fox missing significant chunks of time. During his final 31 appearances with Sacramento in December through February, he averaged 16.1 points, 8.9 assists, 3.9 rebounds and 1.6 steals. However, the promising young guard was shockingly traded to the Pacers at the deadline for Domantas Sabonis. Haliburton quickly became the focus of Indiana's rebuild, and he saw his usage increase the rest of the way. In his 26 appearances with the Pacers, Haliburton averaged 17.5 points on 50/42/85 shooting, 9.6 assists, 4.3 rebounds and 1.8 steals in 36.1 minutes. Heading into 2022-23, the point guard will remain at the center of Indiana's rebuild, along with No. 6 overall pick Bennedict Mathurin. Across 2021-22, Haliburton ranked 22nd in per-game fantasy production, but his ceiling is clearly higher than that since he'll remain in a very high usage role and will continue developing as a 22-year-old. It appears he'll be a consistent source of efficient 20-and-10 double-doubles with steals thrown in, making him one of the best point guard options for fantasy. It won't be surprising come draft day if Haliburton is off the board in the early-to-middle stages of the second round. Read Past Outlooks
read more
Height 6'5"
Weight 185
DOB 2/29/2000
College Iowa State
Drafted 1st Rd, #12 in 2020
$Signed a two-year, $7.86 million contract with the Kings in November of 2020. Kings exercised $4.22 million team option for 2022-23. Traded to the Pacers in February of 2022. Pacers exercised $5.81 million team option for 2023-24 in October of 2022.
Personal Bio/PreCareer Summary

Haliburton was born on Feb. 29, 2000 in Oshkosh, Wisconsin. He is the son of John and Brenda Haliburton. His cousin Eddie Jones was a three-time NBA All-Star who played 14 years in the NBA. Haliburton's father, John, is a basketball referee. Haliburton played high school basketball at Oshkosh North High School. In his senior season, he averaged 22.9 points, 6.2 assists, 5.1 rebounds, 3.5 steals and 1.7 blocks per game. Those stats led to Haliburton to being named USA Today All-USA Wisconsin Boys Basketball First-Team selection and as Wisconsin 2018 Gatorade Player of the Year. While at Iowa State for college, Haliburton majored in pre-business. On the court, he was named to the Second Team All-Big 12 as a sophomore. He announced on March 24, 2020, after the COVID-19 early end of the NCAA Basketball season, that he was foregoing his final two seasons of college eligibility and entering the 2020 NBA Draft. Haliburton earned a starting role by the second game of his freshman season and never looked back from there. He had a season-best 16 points Nov. 26 against Omaha, and posted his first career double-double with 15 points and 17 assists Dec. 9 against Southern. When it was all said and done, he finished seventh in the Big 12 conference with 33.2 MPG. Haliburton took on a more active role in the scoring department in his second and final season with the Cyclones, starting with a career-high 25 points Nov. 27 against Michigan. Later in conference play against TCU, he posted a triple-double with 22 points, 12 rebounds and 10 assists. Haliburton's season was cut short by a fractured wrist in early-February, but the 6-5 point guard had done enough to impress NBA scouts and declared for the draft later in March. Despite the injury, Haliburton still earned second-team all-Big 12 honors.

GIndiana Pacers
See All NBA Rumors
Past Fantasy Outlooks
2021
2020
Haliburton turned heads in his first NBA campaign, earning a selection to the All-Rookie First Team on the strength of 13.0 points, 5.3 assists, 3.0 rebounds, 2.1 three-pointers and 1.3 steals per contest. He was especially effective in 20 games as a starter, posting per-game averages of 14.9 points and 6.0 dimes. The Iowa State product couldn't match the scoring output of Anthony Edwards or LaMelo Ball -- the only two first-year players to finish ahead of him in Rookie of the Year voting -- but he was a much more efficient shooter, knocking down 47.2 percent of his field-goal tries (including 40.9 percent of his attempts from three-point range) and 85.7 percent of his shots from the charity stripe. Haliburton's refined offensive game is a boon to a talented young Kings squad that is looking to end a 15-year playoff drought, but there is some uncertainty regarding how the backcourt will shake out. De'Aaron Fox remains the unquestioned focal point of the offense, and Buddy Hield started every game in which he played last season. Haliburton has performed well next to Fox and seems deserving of a larger role, so Hield could very well end up as the sixth man (if he isn't traded). The addition of rookie Davion Mitchell -- the recently crowned 2021 NBA Sumer League co-MVP -- further complicates the picture, though he isn't likely to significantly threaten Haliburton's minutes off the bat. Despite the mini-logjam, there's zero doubt that Haliburton will get significant playing time in his sophomore campaign. He appears safe as a mid-round selection in fantasy drafts.
Haliburton seemed like a lock as a top-10 pick, but he slipped to the Kings at No. 12. Haliburton's strength is his playmaking ability. As a sophomore at Iowa State, he averaged 6.5 assists to just 2.8 turnovers. Haliburton has three-and-D upside as well, making 2.4 threes at 41.9 percent while also swiping 2.5 steals and blocking 0.7 shots per game. While he's not an explosive athlete and often shies away from contact around the rim, all signs indicate he'll be a productive NBA player out of the gate. For the Kings, he projects as a sixth man playing both guard spots and possibly some small forward if needed. If that's the case, he could crack the top 100 in fantasy.
More Fantasy News