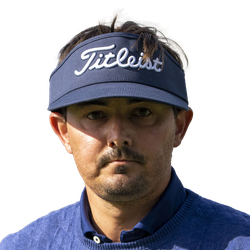 2022–23 Stats
Rank
Winnings
$0
Winnings/Entry
$0
Entries
3
Rounds
6
2022–23 Fantasy Outlook
Lebioda is a decent player, but the reality is that he simply plays a high volume of events. This past season, the 28-year-old teed it up 29 times and made the weekend in just 13 of those events. His putting and iron play are his strengths, but he’ll likely need to improve in other areas this offseason to continue making cuts. Fantasy expectations should be reasonably low, as Lebioda hasn’t recorded a top 15 finish in over a year. Read Past Outlooks
read more
Handedness Left
Status Pro
Height 5'11"
Weight 180 lbs
DOB 1/14/1994
Birthplace Winter Park, Florida
College Florida State
Country USA
Read More News
PGA Stats
Loading Golf Stats...
Tournament Results
Scoring
FanDuel
DraftKings
Loading Tournament Log...
PGA Advanced Stats
Loading Advanced Stats...
Recent RotoWire Articles Featuring Hank Lebioda
2022-23 Golf Draft Kit: Rankings & Profiles
88 days ago
88 days ago
RotoWire's golf writers run down their rankings for the 2022-23 season, and you won't have to look far down the list to find Rory McIlroy.
2022-23 Golf Draft Kit: Projected Earnings
88 days ago
88 days ago
Scottie Scheffler ended last season atop the Official Money list, and RotoWire's golf staff expects him to make another run at the top spot during the upcoming campaign.
2022 Wyndham Championship Betting: Picks, Odds, Predictions and Best Bets
125 days ago
125 days ago
Ryan Pohle lists his favorite wagers for the final event of the regular season and explains why he expects Sungjae Im to impress.
PickGuru Golf: Barbasol Championship
153 days ago
153 days ago
Joe Szmadzinski runs down his top picks for this week's contests on PickGuru and explains why he is locked in on Lee Hodges.
Betting on Golf: Zurich Classic of New Orleans
230 days ago
230 days ago
Ryan Pohle provides his top picks for this week's team event and explains why he likes Tyrrell Hatton's squad to take down a head-to-head matchup.
Past Fantasy Outlooks
2022
2020
2019
2018
Lebioda became a DFS star throughout summer with his stretch of three straight top-10s and five top-20s in seven starts. Lebioda ended the season on a disappointing note by missing the cut in his final three starts. The 27-year-old still has some upside after ranking top-55 in both scoring average and SG: total. His putting and iron play are the two strongest parts of his game.
Lebioda took a step back in his second season on Tour, which isn't out of the norm. From the 126-150 category, he missed more cuts than he made but a reversal if he can straighten out his irons. He made about one-third of his cash by finishing third in the oppo Bermuda Championship.
Lebioda was a rookie on the PGA Tour in 2018-19 and fared pretty well, making 15-of-23 cuts with three top-25s in five events in April and May. His ball striking was solid, ranking 62nd in SG: Tee-to-green and 25th in GIR percentage. Although he did not finish in the top 125, he did crack the top 150 and also managed a spot inside the top 25 on the Korn Ferry Tour Finals to retain his PGA Tour card for this season. The Florida State product was also 23rd in birdie average. Putting is where the improvement needs to be made, but that's easier to fix than the long game. At just 25, Lebioda has time to improve, which he will this season.
Lebioda snuck in the top 25 on the Web.com Tour regular-season money list in 2018 with a T34 at the WinCo Foods Portland Open before struggling through the first three legs of the Finals. He's made 18 of 25 cuts and collected four top-10s to go along with seven top-25s. Lebioda has never played in an event on the PGA Tour, but he ranked 32nd in ball striking at the Web.com level in 2017-18.
More Fantasy News