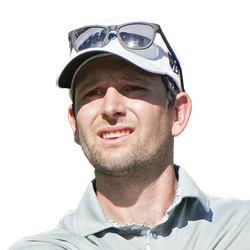 2022–23 Stats
Rank
192
Winnings
$18,630
Winnings/Entry
$6,210
Entries
3
Rounds
8
2022–23 Fantasy Outlook
Trainer is your prototypical Tour grinder. He plays a very full schedule (31 events in 2022) and typically does just enough to make the cut in about half of these events. His best finish this past season was T11 at the Mexico Open. The 31-year-old American will be tough to trust in any fantasy format until he proves he is able to truly contend for PGA victories. Read Past Outlooks
read more
Handedness Right
Status Pro
Height 6'1"
Weight 175 lbs
DOB 4/15/1991
Birthplace Marseille, France
College USC
Country USA
Read More News
PGA Stats
Loading Golf Stats...
Tournament Results
Scoring
FanDuel
DraftKings
Loading Tournament Log...
PGA Advanced Stats
Loading Advanced Stats...
Recent RotoWire Articles Featuring Martin Trainer
2022-23 Golf Draft Kit: Rankings & Profiles
88 days ago
88 days ago
RotoWire's golf writers run down their rankings for the 2022-23 season, and you won't have to look far down the list to find Rory McIlroy.
2022-23 Golf Draft Kit: Projected Earnings
88 days ago
88 days ago
Scottie Scheffler ended last season atop the Official Money list, and RotoWire's golf staff expects him to make another run at the top spot during the upcoming campaign.
Past Fantasy Outlooks
2020
2019
2018
It was a brutal 2019-20 campaign for Trainer, who missed the cut in 19 of 21 starts and failed to bring in even $100,000 in official earnings after enjoying a relatively successful rookie year during the 2018-19 season. Trainer ended the season with nine consecutive missed cuts from the Puerto Rico Open to the Wyndham Championship, ultimately finishing outside of the top 200 on Tour in SG: Tee-to-Green and SG: Total.
Trainer had a very disappointing rookie season with the exception of one week. He won the Puerto Rico Open, which gives him a two year exemption he will hope to take advantage of in his sophomore campaign. Trainer would not be a smart pick in salary cap leagues though, as he closed last season with 11 straight missed cuts and ranked 192nd in SG: Total.
The former USC Trojan was one of only two players to win twice on the Web.com Tour in 2018, claiming victories at both the El Bosque Mexico Championship and Price Cutter Charity Championship. He cooled off a bit near the end of the season, however, missing thre consecutive cuts from the Ellie Mae Classic through the Nationwide Children's Hospital Championship before placing outside of the top-50 at the Albertsons Boise Open. He still managed to rank 12th or better in birdie average and driving distance.
More Fantasy News