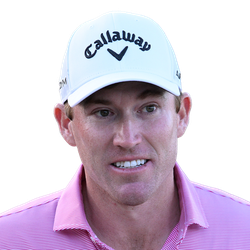 2022–23 Stats
Rank
44
Winnings
$771,051
Winnings/Entry
$77,105
Entries
10
Rounds
36
2022–23 Fantasy Outlook
Shelton paced the entire Korn Ferry Tour in putting average throughout the 2022 season, adding wins at the BMW Charity Pro-Am and the Pinnacle Bank Championship along the way to finish No. 2 in the KFT Regular Season Eligibility Points List. The 27-year-old University of Alabama product enjoyed prior success at the PGA Tour level in 2019-20 when he recorded three top-10s and five top-25s en route to qualifying for the BMW Championship with a top-70 FedExCup standing, though he missed the cut in 21 of 32 starts the following season and was consequently relegated to back to the KFT. The aforementioned hot putter led Shelton to a ranking of fourth in birdie average on the KFT in 2022, though he finished 74th or worse in both driving distnce and GIR percentage. Read Past Outlooks
read more
Handedness Right
Status Pro
Height 6'0"
Weight 190 lbs
DOB 8/25/1995
Birthplace Wilmer, Alabama
College Alabama
Country USA
Read More News
PGA Stats
Loading Golf Stats...
Tournament Results
Scoring
FanDuel
DraftKings
Loading Tournament Log...
PGA Advanced Stats
Loading Advanced Stats...
Recent RotoWire Articles Featuring Robby Shelton See More
2023 AT&T Pebble Beach Pro-Am Betting: Picks, Odds, Predictions and Best Bets
Yesterday
Yesterday
Ryan Pohle breaks down the odds for this week's event and explains why he is banking on a quality result from Erik van Rooyen.
Weekly Preview: Farmers Insurance Open
8 days ago
8 days ago
Luke List seems to have Torrey Pines figured out, and Greg Vara suggests giving him a look in a few different formats.
Weekly Recap: Rahm Records Another One
9 days ago
9 days ago
It was another big week for Jon Rahm, who picked up his fourth worldwide win in four months at The American Express.
FanDuel PGA: Sony Open in Hawaii Picks and Strategy
22 days ago
22 days ago
Matt Kuchar should be more comfortable in his surroundings than most this week, and Ryan Andrade believes that will help him deliver in the latest contests on FanDuel.
2022 World Wide Technology Championship at Mayakoba Betting: Picks, Odds, Predictions and Best Bets
92 days ago
92 days ago
Ryan Pohle breaks down the betting board for this week's tournament and explains why he has high hopes for Russell Henley.
Past Fantasy Outlooks
2020
2019
Shelton barely made half his cuts, 13 of 24, yet had some key results that vaulted him into a second playoff event. He tied for third in the 3M Open late in the season, then for 13th at the Northern Trust. He's only 25, so there can be some upside.
The 23-year-old University of Alabama product was scorching hot from April to May as he tallied wins at the Korn Ferry Tour's Nashville Golf Open and Knoxville Open en route to a quartet of top-4 finishes in a span of five starts. This blistering stretch ultimately led to runner-up honors on the KFT's Regular Season Points List, despite Shelton being restrained by seven total missed cuts and a WD. The 2019-20 campaign will mark Shelton's first season as a full-status cardholder on the PGA Tour, but he won't be eligible for the Rookie of the Year award after playing in eight events during the 2016-17 season when he made five cuts and posted a T16 at the 2017 Valero Texas Open.
More Fantasy News