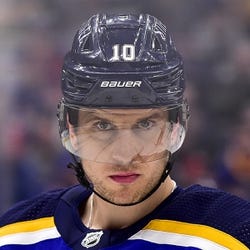 2022 Stats
G
13
A
24
PP Pts
10
+/-
-27
PIM
27
ROS Projections
G
A
PP Pts
+/-
PIM
Unlock Our Projections
2022 Fantasy Outlook
St. Louis got nearly a point-per-game (24 goals, 58 points in 62 games) from Schenn in his age-30 season, which seems like a massive win given the fact he posted 36 points in 56 games a year prior. Hopefully you were able to snag Schenn at a discount last fall because regression is likely forthcoming, particularly in the goal-scoring department. Schenn's 24 goals came on just 111 shots. That's a 21.6 percent shooting percentage. His 17 power-play points marked the sixth time in the past eight years that Schenn has reached that total, so he's certainly still an asset to the Blues, but fantasy managers shouldn't be expecting anywhere near the same level of production in the 2022-23 campaign. Read Past Outlooks
read more
#