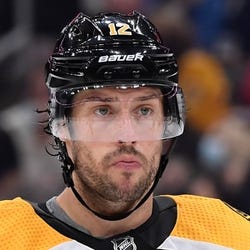 2022 Stats
G
2
A
6
PP Pts
1
+/-
2
PIM
12
ROS Projections
G
A
PP Pts
+/-
PIM
Unlock Our Projections
2022 Fantasy Outlook
Smith's game lacks upside - from both a fantasy and real-life perspective - but he's been a solid depth option for years and last season, his second with the Bruins, was no exception. Smith played in 74 games, finishing with 16 goals and 36 points. He added 187 shots on goal and a career-high 95 hits. There's a stable floor here for fantasy managers, but Smith won't be winning you your league in 2022-23. That said, he may be a candidate for increased production early in the season while Brad Marchand is sidelined due to double hip surgery, so keep an eye on how Boston, with new coach Jim Montgomery, stack lines in training camp. Read Past Outlooks
read more
#