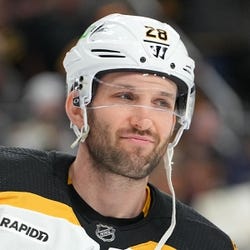 Calculate Stats Over Time
Just click on any two dates.
Scoring
FanDuel
DraftKings
Yahoo DFS
FantasyDraft
Head2Head
Loading Skater Game Log...
2022–23 Time On Ice Stats
Ice Time
Power Play
Short-Handed
2020–21
20:44
0:05
2:43
2021–22
18:06
0:01
3:05
2022–23
18:21
0:02
3:19
Bruins Depth Chart
Our full team depth charts are reserved for RotoWire subscribers.
Subscribe Now
Bruins Power Play Depth Chart
Our full team depth charts are reserved for RotoWire subscribers.
Subscribe Now
Recent RotoWire Articles Featuring Derek Forbort See More
Hutch's Hockey: Trade Deadline Reactions
313 days ago
313 days ago
Shawn Hutchinson breaks down the fantasy changes from all of the trades after the NHL's trade deadline.
DraftKings NHL: Wednesday Breakdown
March 24, 2021
March 24, 2021
Sasha Yodashkin explores a Sharks forward stack Wednesday against the Kings.
Cap Compliance: Calgary Flames
May 21, 2020
May 21, 2020
AJ Scholz and Kyle Riley weigh in on how they believe the Flames should approach free agency this offseason.
NHL Trade Deadline: Upgrades & Downgrades
February 25, 2020
February 25, 2020
Jason Chen analyzes the most significant moves from Monday's trade deadline, including an upgrade for Vincent Trocheck in Carolina.
NHL Barometer: Risers & Fallers
February 25, 2020
February 25, 2020
Jan Levine analyzes the upgrades and downgrades this week in hockey, including Boston's Patrice Bergeron, who is on a point-per-game pace.
Past Fantasy Outlooks
2021
2020
2019
2018
2017
2013
2012
2011
2010
The 29-year-old Forbort doesn't move the needle much offensively - he had 12 points last season with Winnipeg and matched his career high with two goals - but he was still able to land a three-year free agent contract with Boston in the offseason. Forbort's fantasy value lies in his defensive work (115 blocks and 80 hits in 2020-21) and the handful of points that result from his sheer volume of playing time (20:44 TOI). He is expected to fill a similar role in Boston's top four, making him a viable option to fill out the back end of fantasy rosters in deeper formats.
Forbort spent most of 2019-20 recovering from injuries. He logged one assist in 20 gamessplit between the Kings and the Flames before signing a one-year deal with the Jets in the offseason. Forbort will be part of an overhauled blue line for the Jets in 2020-21, which could see him skate as high as the second pairing. Prior to last year, the 28-year-old had no fewer than 14 points in a full campaign -- there's not a ton of scoring upside, but he could interest fantasy managers in the deepest of formats. He'll also challenge the century mark in hits and blocked shots, typically doing better in the latter.
The 27-year-old has solidified his spot as the Kings' top stay-at-home defenseman over the last three seasons, recording triple-digit hits and blocked shots in each of them while mainly leaving the offensive duties to Drew Doughty -- Forbort has never scored more than two goals or 18 points in a season. His status as a pending free agent could make him a prime trade target, but the organization's lack of blue-line depth will make him tough to replace if he does get dealt. Forbort's fantasy value is limited to formats that account for his secondary contributions, but his value to a real-life defense corps -- and to the goaltenders he skates in front of -- is much higher.
Forbort's value at this point in his career comes in leagues that reward defensive play. He topped 100 in both hits and blocked shots last year (120 and 129), and given that he managed 18 points in each of the past two seasons, he's not a total liability on the offensive side. But in leagues that do not use defensive categories, Forbort just doesn't produce enough to be worth a roster spot. One point every four games is fine when you contribute in other ways, but in offense-heavy leagues, Forbort won't have enough opportunities to do that.
The 2010 first round selected took the long road to the NHL with a three-year stop at the University of North Dakota and two full seasons in the AHL before splitting 2015-16 between the AHL Ontario Reign and the Kings. Forbort made up for lost time with a promising first full season in the NHL, though. He owns the size and skating ability to play a shutdown role, but Forbort is also capable of making smart outlet passes. The 25-year-old defenseman also settled into a solid pair with Drew Doughty at even strength, which is a cushy fantasy setup if the partnership carries into 2017-18. Still, Forbort's offensive upside is capped, and his fantasy value is limited to his contributions in the PIM, hits and blocked shots categories.
Forbort was drafted as a two-way defensemen with some offensive upside, but that hasn't really materialized in three seasons at the University of North Dakota. He has the size (6-4, 218) to log heavy minutes, but needs to improve his offensive game to be much of a fantasy factor. He'll head to the AHL if he opts to forego his last season at North Dakota.
Forbort, the 15th overall pick in the 2010 Entry Draft, hasn't taken the step forward that many were envisioning from the 6-5, smooth-skating defenseman. He's still just 20 years old, but needs to start showing some signs of improvement. He did seem to elevate his game after suffering a foot injury at the 2012 World Junior Championship tournament, picking up nine points in his last 17 games. Hope remains.
Forbort's a smooth-skating defenseman, though it hasn't translated into an offensive game yet. The 15th overall selection in the 2010 entry draft posted 15 assists (no goals) in 38 games for North Dakota and he'll look to continue to refine his game before making the next jump.
The Kings had to be thrilled when Forbort slipped in the draft as they moved up two spots to grab him with the 15th overall pick. He skates well for someone his size (6'4") but doesn't really project as a standout at either end of the rink. He'll be a nice second pair defenseman once he matures but will need a few years before he's a candidate to skate with the Kings.
More Fantasy News